Every time I connect a new ESP8266 (ESP-12F) to a new LD1117v33, as long as I insert an ammeter in between, it runs fine. It consumes about 70mA during normal running, and almost 0mA when in deep sleep. Once I remove the ammeter from the circuit, the ESP is immediately damaged, so that it begins heating up, and after about a minute is too hot to touch. When I connect the ammeter back again, the ESP constantly draws either 320mA or 550mA, irrespective whether it's in "normal" operation or in deep sleep. This obviously means something inside breaks, but what exactly and why?

I'm not using any capacitors on the input or output of the LD1117v33. I know most people complain that it's necessary for "stability," but I don't see how it would be relevant to this particular problem. The voltage shown on the DMM is always 3.2V, which seems fine. I really need to get to the bottom of this, otherwise I'm going to keep damaging ESP after ESP. They all continue to work, but permanently draw way too much current and run hot, and it always only happens once I remove the ammeter out of the circuit or abstain from inserting it to begin with.

When I power the ESP from a 300W/20A down converter (ebay,) it runs perfect & cool, even if the voltage is 3.4V, 3.5V, or 3.1V. If I use a tiny down-converter (also EBay; don't know exact model) instead to power small electronics such as the ESP, that converter also gets too hot to touch. Although I never thought to check, I'm beginning to realize the same problem might be happening there, too. I never realized any of this before because I assumed it was normal for the heatsink the LDO is attached to to get that hot, and I never cared about power consumption or measured it. I probably have been damaging all of my ESPs up to this point without realizing it. It just now came to light since I started using deep sleep and measuring current consumption for a battery powered project. As for the mini-down converter, I simply assumed it was too weak to handle the ESP, whereas most likely the ESP was also drawing far too much current than it normally would.

My theory: The sudden current inrush upon connecting is throwing the LDO off, exposing the ESP momentarily to the full 12V input to the LDO. The inrush current might be damaging internal capacitors under the hood, but aren't they supposed to withstand high current swings by design/purpose? I don't see why any voltage spikes would accomodate the current inrush, since there is no reason to assume there is any inductance beyond usual parasitic levels. If that were actually the reason, why/how would adding capacitors to the LDO stabilize/resolve the issue?

Meanwhile I'll test further by adding a 1 ohm resistor in series to VDD, to dampen that inrush. I'll respond with results once they're in.

You NEED the capacitors, in particular the (recommended 10uF minimum) OUTPUT capacitor. A 10uF electrolytic- aluminum or tantalum (or a 22uF ceramic with a couple ohms in series) will do. The input cap of 100nF or more (any of the above types, no series resistor required in the case of ceramic) is also a very good idea.

Note that the ESP8266 module has 10uF+ (marked, probably only half that at voltage) of bypass capacitance on it, so the series resistance you added is somewhat similar to the suggestion of the ceramic cap + resistor, but it would be better to add the few-ohm ESR capacitor close to the regulator. The low-ESR capacitance, even though it is apparently as requested on the ancient datasheet is not suitable since 10uF (real) capacitance ceramic caps did not exist when the datasheet was written. And "10uF" marked small ceramic caps may be 2-5uF when operated at 3.3V.

Without capacitance and ESR in the correct range, the regulator will tend to oscillate. That will cause the output voltage to go way above and way below the rated voltage, which will very much tend to kill your chip.

The fact it's apparently on the edge of oscillation so minor factors affect it does not change the fact that you're attempting to operate it in a well-marked (see edit) undocumented "no man's land" where things like this can and will happen. Like the old maps were said to have been marked (when you left the known world) "here be dragons". Image from Wikipedia: 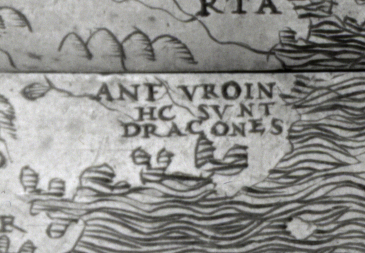 Edit: Note edit- this is a bit more complex than the original answer and the "dragons" are not all that clearly marked out, partly because the map (datasheet) is so old.

I have experienced similar problems with the 1117 LDO regulators.

Texas Instruments have written much on LDO regulator transients and stability. This is particularly good reading - short and to the point. In essence there are some aspects of LDO regulator design that make them very susceptible to stability problems. The article uses different versions of TI LDO regulators to illustrate its point but is, I believe relevant to the 1117.

In TIs own data sheet for its version of the 1117 it advises that a caapcitor on the input of the LDO is recommended but it states that the capacitor on the output is "critical" and specifies it's characteristics quite closely.

Too low an ESR is as likely to cause a problem as too high an ESR and in fact too low an ESR proved to be the root cause of problems with a product that I investigated. Problems that look very similar to those the OP is experiencing.

Please note that adding an ammeter or low value resistor might help in some cases, but depending on how to apply power to the ESP may make that resistor helpful or a hindrance. Some stability issues start off with a transient which then develops into something sustained and problematic. Connecting the ESP to an LDO already pwered up, may cause a transient under some circumstances but not others. Similarly, powering up the entire circuit simultaneously may also cause different symptoms. In my case I found that by slavishlu following the manufacturers data sheet advice there was stability under all circumstances.

For the sake of a capacitor, it surely is worth at least entertaining this idea. Conversely to refuse to do so, is your right and you are obviously enjoying your hobby which is the important thing. I hope that perhaps one more voice of experience might serve to be useful in your efforts.

Just add a series R of 1 Ohm, which solves the issue if the underlying reason in your case happens to be the same as mine. by the way, adding 10uF and even 470uF capacitors DID NOT solve the problem, so please next time read the specifics of the problem, don't go off on easier generalizations/tangents.

Not the answer you're looking for? Browse other questions tagged esp8266 ldo power-consumption overheat or ask your own question.

0
How to get the "max" from two inputs?
1
Multiple buttons connected to reset pin
8
ESP32: how to keep a pin high during deep sleep (RTC GPIO pull-ups are too weak)?
2
Best way to power an ESP8266 (3,3V) from AA batteries with LDO
0
Power off detection circuit to close opened latching solenoid valve
1
Battery backed up power supply using LDO
1
LDO to Power ESP-12F
1
High current usage from LDO when not hooked up to VIN