I am trying to choose a transistor to use in a current mirror to prevent thermal runaway of parallel LEDs (yes I have to connect them in parallel. I know connecting in series or using separate constant current drivers would solve this but it is not possible in the design.)

I need to fully saturate the transistor to ensure the LEDs are being driven by the correct forward current.

The datasheet states that the typical VCE(sat) is 0.16V and max 0.25V. Looking at the Ic-VCE graph, at 0.16V, the device does not appear to be saturated (with the saturation region being where the graph is 'flat' or 'levels out.') Why does the datasheet state that the saturation voltage occurs when VCE=0.16V (to a maximum of 0.25V) but the corresponding graph does not agree with this? 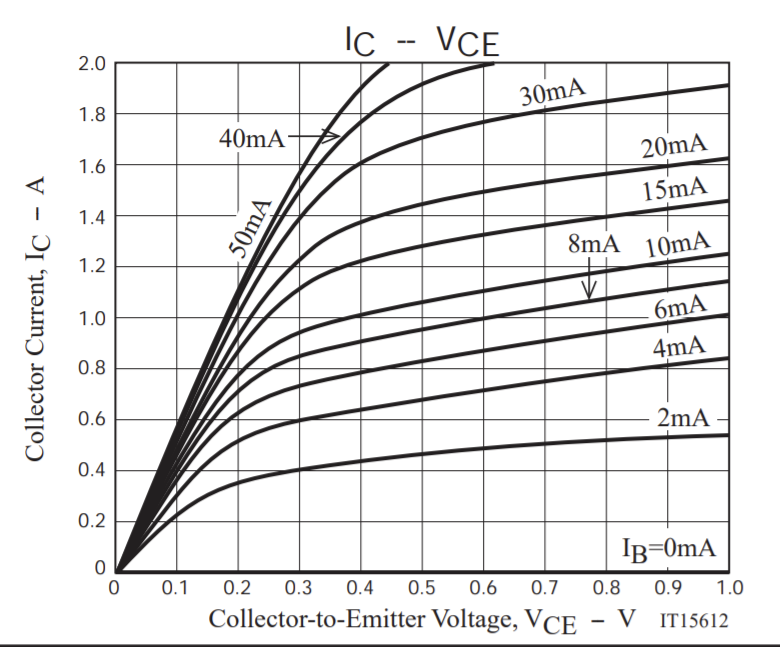 Your interpretation of the \$V_{CE}\$ vs. \$I_C\$ curves is incorrect. That graph shows the behaviour of the transistor in isolation, where \$V_{CE}\$ is varied, and the resulting \$I_C\$ is plotted. The flat regions are in fact where the transistor is operating in its linear region.

If you extend the horizontal axis to the right, you obtain curves like these:

The straight flat-ish regions of the \$I_C\$ vs. \$V_{CE}\$ curves aren't actually flat - they are sloped, such that they all intercept the horizontal axis at approximately the same voltage, called the Early voltage. This is called the Early Effect. Importantly, the slope (change in collector current divided by change in collector-emitter voltage, \$\frac{\Delta I_C}{\Delta V_{CE}}\$) is different for each different base current. This slope is called admittance, and is the reciprocal of the effective small-signal resistance between collector and emitter. The important point here is that in this region, the transistor is not saturated, and is in fact amplifiying linearly.

The region of this graph that corresponds to saturation is where the curves are near-vertical. In the classic collector resistor and fixed voltage source scenario, this occurs when the resistor has the maximum voltage across it, and further increases in base current cannot result in any rise in collector current: 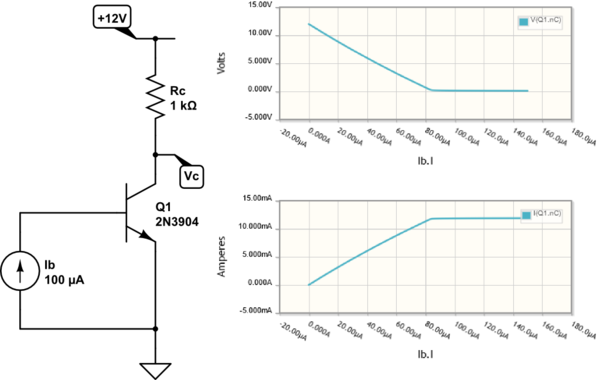 In this scenario, where collector current has reached a maximum, variations in base current are analogous to jumping horizontally (because \$I_C\$ is fixed) from curve to curve in the \$V_{CE}\$ vs. \$I_C\$ plot.

If you were then to increase base current \$I_B \$ from 15mA to 20mA (and assuming this doesn't alter \$I_C \$ significantly), this would represent a jump horizontally to the left, from the 15mA curve to the 20mA curve, and you can see that \$V_{CE}\$ would drop from 0.16V to 0.15V. That should help illustrate that a large increase in base current has not resulted in any significant change to \$V_{CE}\$, because the transistor is saturated in this regime.

The term "Saturation" means exactly the opposite for FETs and BJTs. The flat region is not in saturation for junction transistors. A transistor in saturation would be at the bottom left corner.

The curve tracer type slopes show constant base current with Vce vs Ic. But the horizontal slope acts as a (lossy) current sink and the more vertical slopes act as a lossy switch (resistor). 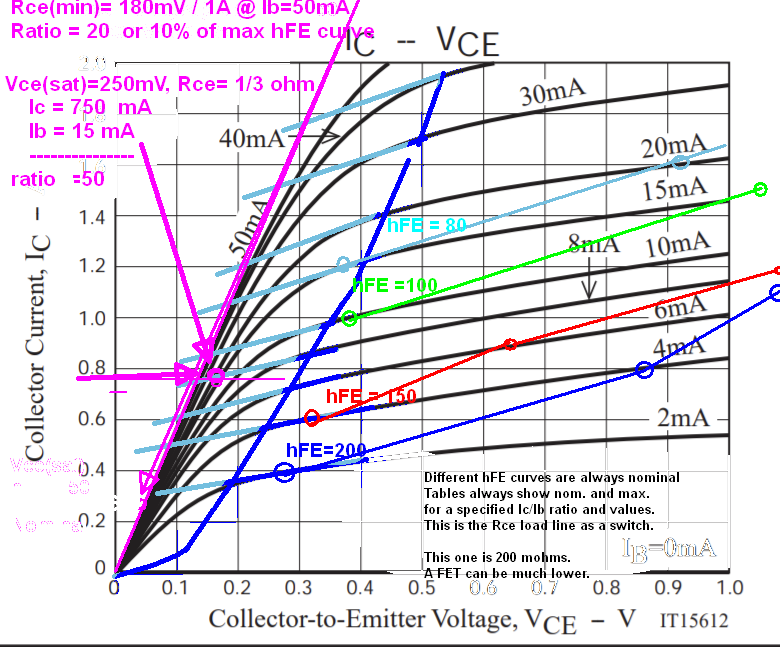 why does the datasheet state that the saturation voltage occurs when VCE=0.16V (to a max of 0.25V) but the corresponding graph does not agree with this?

The graphs show it but it is only one point in magenta. For efficiency reasons, they chose the optimum current ratio within reasonable heat rise. This turns out to be about 10% of the max linear hFE ratio when used as a current amplifier.

Then the steepest part of the curves are the lowest resistance as a switch. The rated Vce(sat) is just to the right of the steepest curve where the Rce changes from 180 mΩ to 333 mΩ with a higher current ratio.

Question not asked is ...

Compute required Rs for current sensing or voltage drop and choose a FET switch with much lower resistance.

You pick your own values for V margin and current and RdsOn. 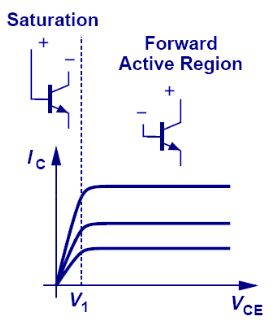 Relative to the emitter, as shown for the pnp transistor, when the base-emitter voltage is greater than the collector-emitter voltage the BJT device is operating in the saturation region. 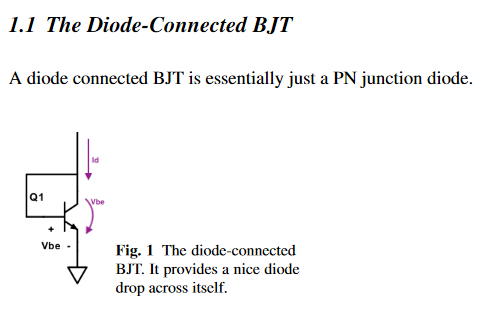 This video ends with a demonstration of driving LEDs with a current source where the limit on this ability is called the compliance voltage:

It sounds like you want to operate multiple strings of LEDs in parallel from a fixed minimum voltage source and program all strings to have constant current. I don't think you have to saturate transistors for this design, however, your voltage source must exceed the minimum compliance voltage of each current source or current sink.

In fact the video lesson effectively ends on this statement "In this case the compliance voltage is reached when we saturate the transistor."

It seems you are mixed up about what saturation is and perceive a contradiction where there is none.

Saturation in a BJT is where the base emitter junction and base collector junction are both forward biased.

In the datasheet in your question, note that the conditions given for Vce(sat) are Ic = 0.75 A and Ib = 15 mA. Here is the graph with that particular point marked with a red cross. 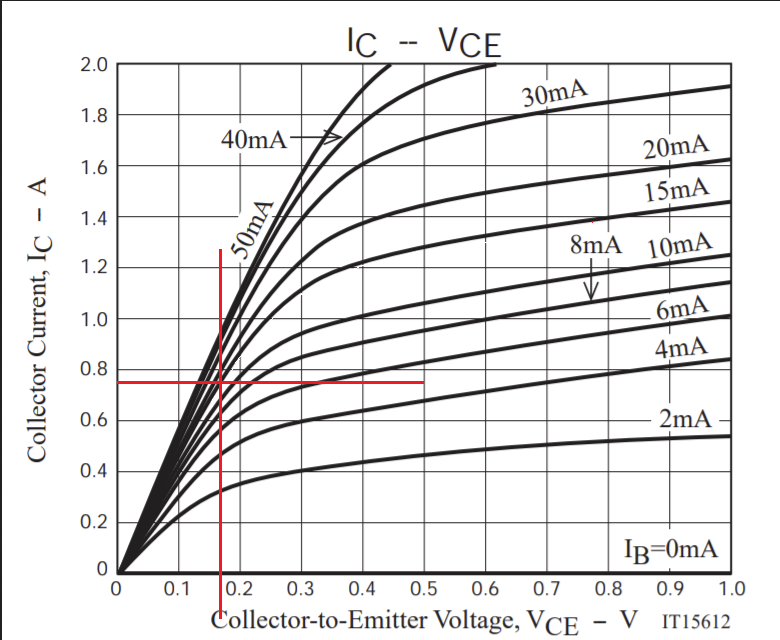 As you can see, the vertical red line crosses the horizontal axis at about Vce = 0.17 V. This is within the range given by the datasheet, so there is no contradiction. You were perhaps just confused about which part of the graph shows saturation.