I'm trying to calculate the transfer function of this circuit: 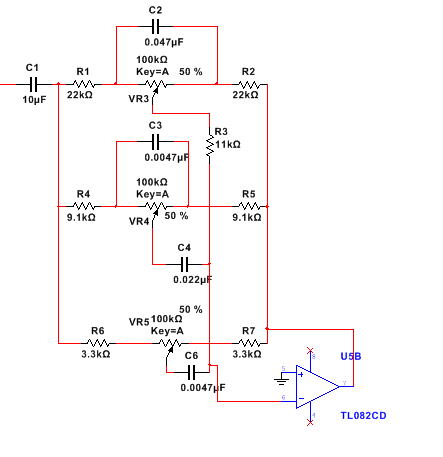 As one of the answerers sugest on Explanation of 3 Tone Control Circuit , I tried to divide the circuit into 3 parts, the bass the mid and the treble, did some Delta-Wye transformations, but couldn't get a good result. If I assume the mid-range and treble part don't exist, the transfer function, with VR3 at 50%, from the bass point of view is approximately 1. If I now omit the bass and treble parts, the transfer function from the mid-range point of view, for VR4 set at 50%, is also approximately 1. It means that with VR3 at 50% and VR4 at 50%, the gain is 3dB, which is not, according to the simulator, and I'm not even considering the treble part. So, any suggestions on how to calculate the transfer function other than diving it into 3 parts? 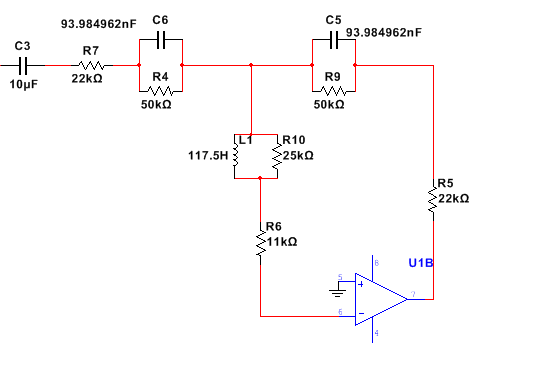 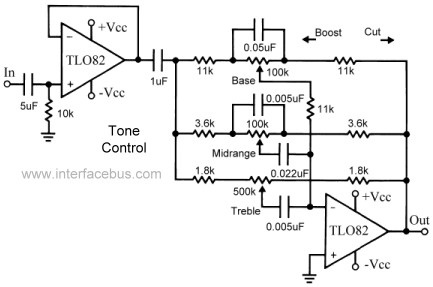 I diagrammed things out about like the following (which includes some sympy script needed to perform a full solution): 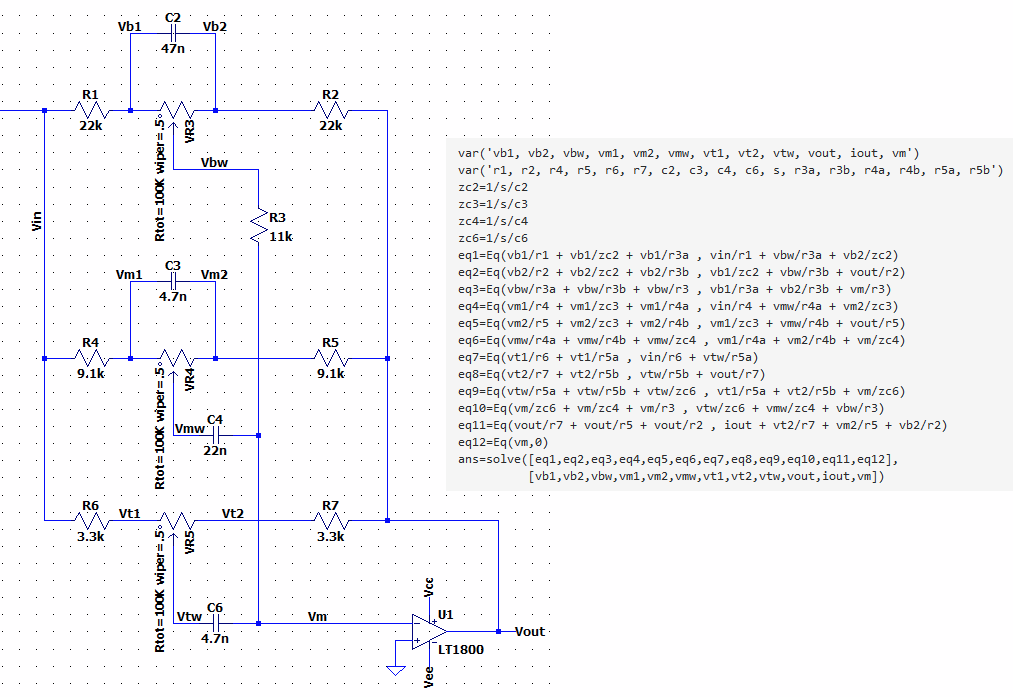 The automated solution is horribly long and not at all useful. So this implies a different approach is needed.

I don't have the time to go through all of how I'd approach this. Not right now. But I may be able to outline what I tried to suggest in my very first comment to you. It was something that just popped to mind right away and I still think, given more time to allow things to settle, that the original insight is the right approach. I'll try to expand on that comment here.

If you take a quick look-see of the schematic, you might notice that if we assume that the impedance of \$C_4\$ and \$C_6\$ are high enough, then we can ignore their loading (and their consequent attached circuits) upon the bass stage. This allows us to simplify the bass stage analysis for a moment.

That said, I prefer to establish that there is a parameter, \$0\le \phi_{3}\le 1\$, that indicates the position of of the potentiometer, \$R_{P_3}\$ (VR3 in the above schematic.) It's confusing (and higher-entropy as some may say) to break it up into two distinct resistor parts. So I'd parameterize the potentiometer using \$phi_{3}\$, instead. The resulting transfer function is as follows:

This is a low-pass and a bandpass result, which is interesting because there's only one energy storage device here. For the bandpass portion, and given your values, \$34\:\text{Hz} \lt \omega_{_0}\lt 188\:\text{Hz}\$, then respectively \$5.45 \ge K_0\ge 0.180\$ and \$K_1=1\$. So the bandpass has a fixed gain and it is the lowpass gain and frequency that is under adjustment. It's a high gain when the corner frequency is lowest and at low gain when it's corner frequency is highest. Which makes a lot of good sense, as well.

The reason has to do with the interaction of these stages -- as the corner frequency of the bass stage gets close enough to interfere with the next stage (mid-range), it's gain is at its lowest and well below 1. So its impact will be to somewhat diminish, but not to peak, the shared region of frequency between them, should the mid-band be set to boost its band. And of both are set to diminish their gains then the extra dip won't be important, anyway. This suggests a careful design approach to me.

I mentioned above, "But given that this can be treated as "grounded" impedance at the (-) opamp input, it won't affect the frequency or the the gain." It's useful to prove this result, rather than just state it as fact. If you haven't attempted the analysis, yourself, you should. The solution is the same, with or without the added load and it is worth a moment's time to prove this to yourself. So let's do that now.

Here's the sympy statements I used to analyze the bass section, with the assumption that load imposed by the other sections can be temporarily ignored. (Please note that while it is quite true that it is valid to remove \$R_3\$ from the analysis, it's also harmless to keep it):

After a little bit of massaging, that becomes what I wrote earlier. Feel free to prove that on your own. But it's the same. I just cleaned it up.

Suppose the other sections represent a load we cannot ignore, located at \$V_m\$, and let's suppose that this load looks like a capacitor, \$C_x\$, in series with a resistor, \$R_x\$. (Not far-fetched, as you can see.) Then:

\$V_m\$ is a virtual ground. As earlier mentioned, the grounded loads of the other section impedances as arranged here do not impact the analysis of each section, independently. There is no path by which they can. And analysis demonstrates the fact.

Now, the above still assumes that we can treat sections not under consideration as grounded loads through a complex impedance, in order to see how such a load might impact the section we are currently considering. In this case, we find the sections are completely independent of each other.

The reality is a little more complicated, as they don't actually go to ground but instead go through complex imepdances to the input and output, which themselves are signal-dependent. But for analysis purposes, it still remains a reasonable approximation that should allow us to greatly simplify analysis.

Here's what I might additionally try in order to capture the added, fuller complexity I just mentioned (complex impedances from the (-) input towards the input and output nodes):

The results are indeed more complex, now. And I've not yet attempted to factor through the results to simplify them into an error term that is added to prior analysis, above. I will do so when I get the time and inclination. It's important to consider, so I'll try and do that when I get a moment.

To show this, I developed the fuller transfer function for the circuit and then took the difference between the fuller TF and the simplified TF and then did nothing more than state that \$R_1=R_2\$ in addition to setting the potentiometers to 50% (where also \$C_x=C_y\$ and \$R_x=R_y\$):

Note the exact result! Here, I left all of the variables within the difference equation as abstract values. No specific value. The entire thing just collapses to 0, indicating "no difference" between the simplified analysis and the fuller, more complex analysis case. If I even slightly modify the balanced resistor values or even slightly modify the potentiometer positions, then the difference doesn't simplify to 0. So, in such cases, the simpler analysis misses some residuals that need to be included.

Log time ago I try to analyze this circuit.

For low frequency (bass) we have a "simple" case. 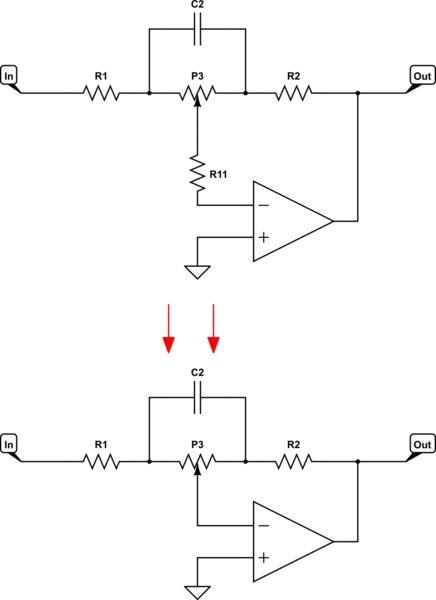 And raw (high entropy) transfer function will look like this:

And for the max bass boost, the gain is equal to:

And the pole and the zero ar at: 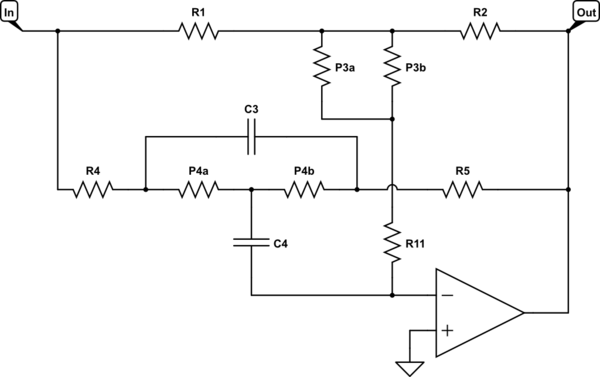 Also, notice that the job of \$R_{11}\$ resistor is to separate and reduced the bass pot influence on the rest of a circuit. And makes the bass "equivalent resistance" fairly constant at mid and high-frequency.

Now, to simplify the circuit we can apply Y-Δ transform. 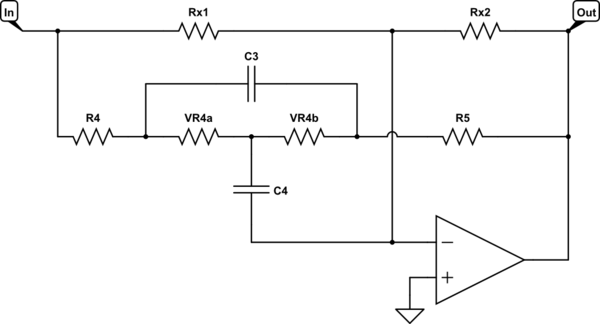 The raw transfer function will be very complex for this circuit:

And the gain is:

And finally, we can analyze the high-frequency booster (treble range). 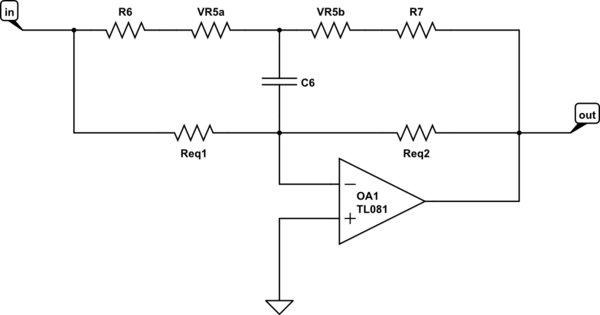 The raw transfer funcion is:

And the maximum boost at a treble range:

And we have a zero at:

And maybe @Verbal Kint will show us how to get a low-entropy solution using Fast Analytical Circuits Techniques.

Or maybe @Jonk will show us his work too?

Not the answer you're looking for? Browse other questions tagged operational-amplifier audio transfer-function frequency-domain tone-control or ask your own question.