I'm using an app to explore different 555 timer uses and getting my head around the logic. The app states that this circuit will flip-flop the two LED's on each press of the button, but I can't see why it would work, and I've breadboarded it and it DOESN'T work, for me.

I can reset the circuit by shorting the reset pin, 4, to ground, (which I expected) and my power supply (rated safe for short circuit FWIW) temporarily goes into SC protect mode and the circuit returns to pin3 low. But with no way of the circuit influencing the reset pin in normal use I can't see the logic behind how this would work.

I am probably missing something, however, and I've only got a cheap breadboard so it's always in the back of my mind that it's a bad connection on that, somewhere. But I wanted to just ask if this circuit could legitimately do what it is supposed to do, if so then I'll keep searching for bad connections in my prototype! 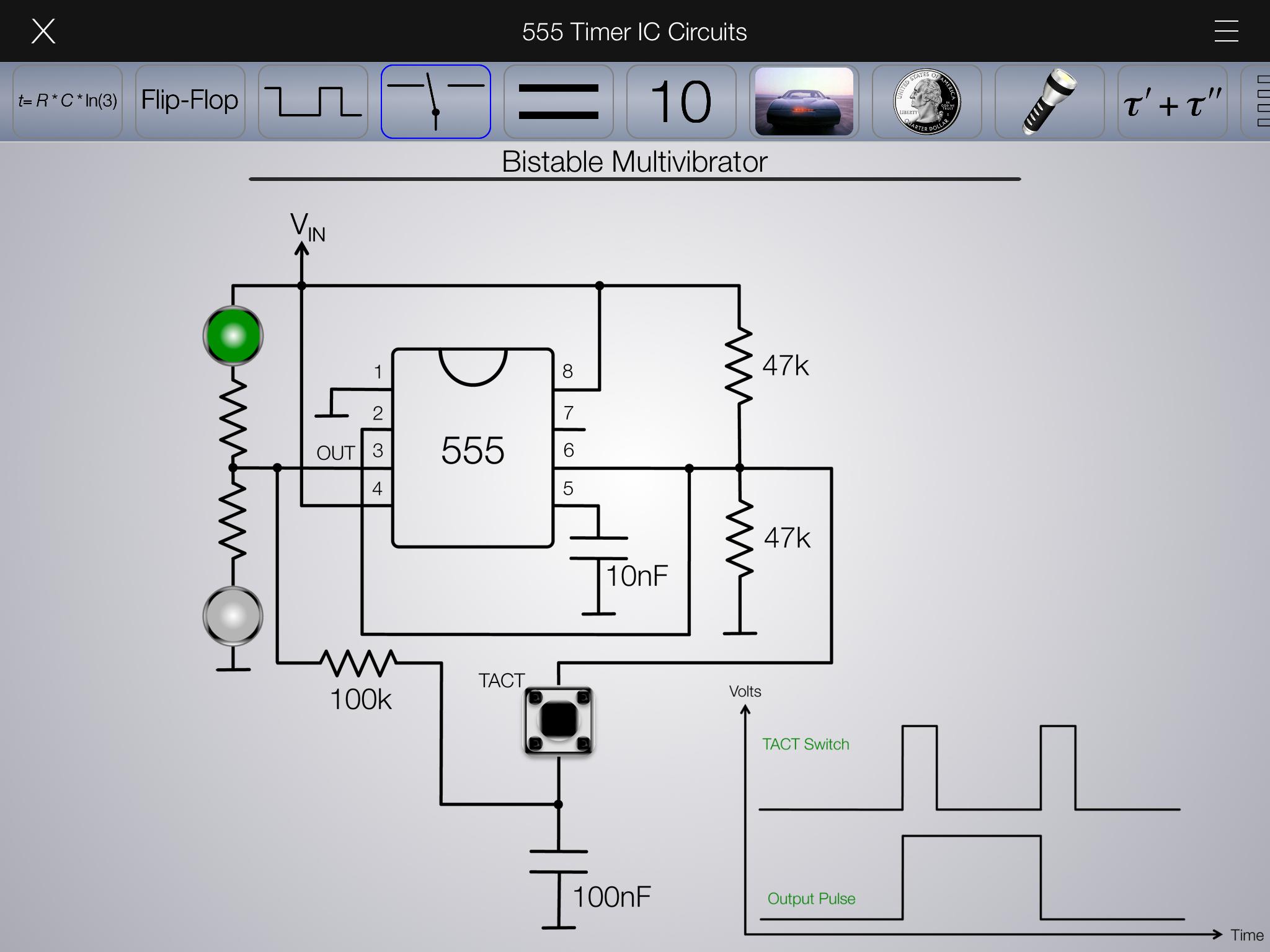 I simmed this circuit and will put the results here for any fellow beginner trying to get their head around it's operation; 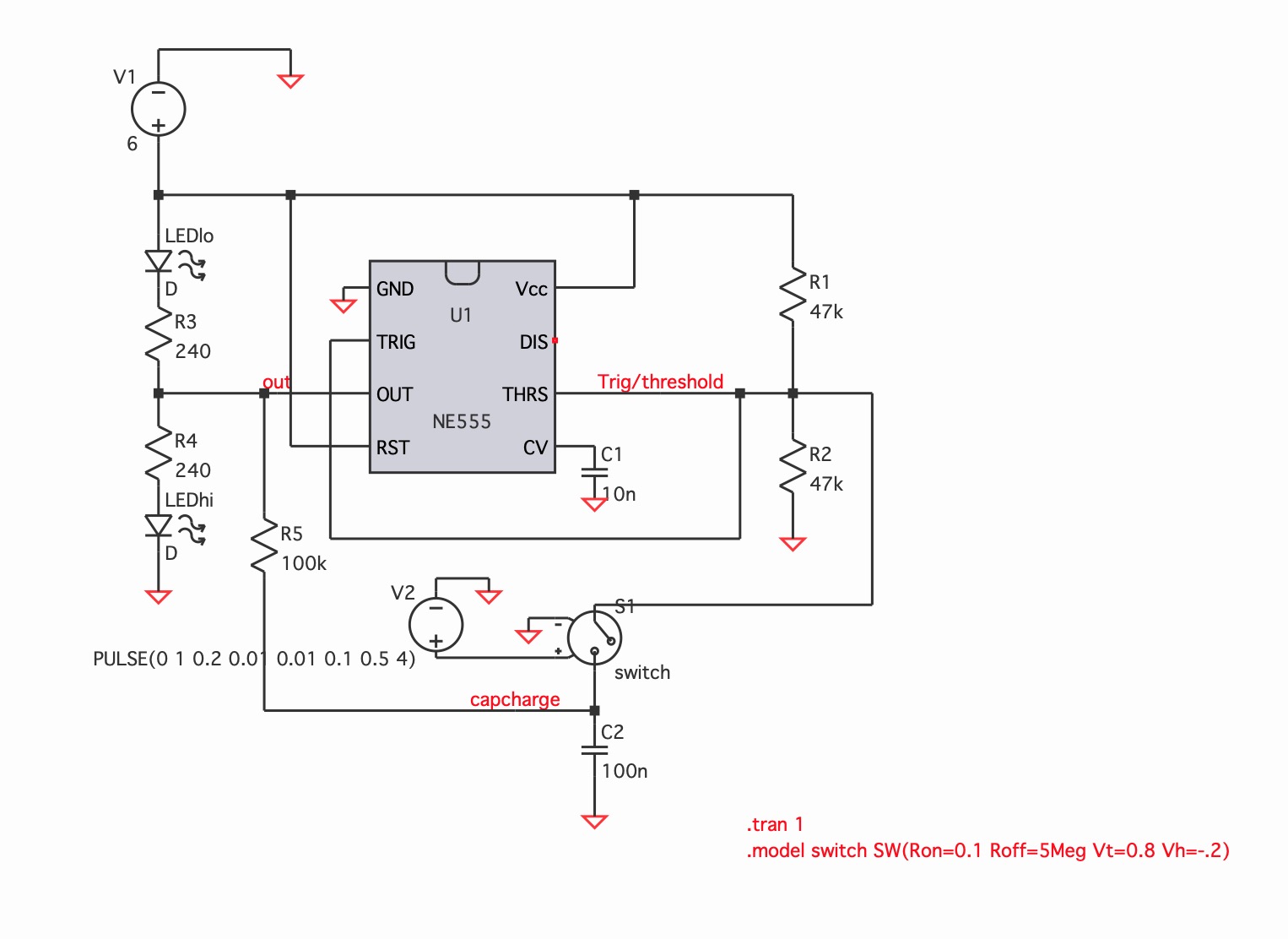 Without the 100k resistor the LTspice 'run' command suddenly slows down to snail pace when the virtual switch is pressed, with it rendering the graph going back and forth between states as fast as the model can handle, as Simon Fitch explained below.

When the switch closes, pins 2 & 6 are momentarily pulled to whatever voltage the 100nF capacitor is charged to in its resting state. So for the circuit to work properly the capacitor must charge to less than 1/3Vcc and more than 2/3Vcc for low and high outputs respectively. If the load on the 555's output is too high it will reduce the output swing range and the capacitor will not charge and discharge to high enough and low enough voltages.

Try reducing the output load by increasing the value of the LEDs' series resistors (reducing LED brightness) to make sure the capacitor is charging to above 2/3Vcc and below 1/3Vcc in the circuit's resting state.

Based on your description of the circuit's operation, the connections to pin 2 appear to be ok.

Check the connection to pin 6, the threshold input. This must go above (2/3 x Vcc) for the output to go low.

Also, increase the value of the 100 nF capacitor (reference designators?) to 1 uF or more to better reduce the effects of switch bounce.

What I have written below makes an assumption regarding the function of the 100kΩ resistor (\$R_\tau\$) and the 100nF capacitor (\$C_\tau\$) which is incorrect.

That circuit works well with those original values, as shown, and does not exhibit astable behaviour as I suggest. Where I state that \$R_\tau\$ should be smaller, in fact it must be much larger than 47kΩ, and it is \$C_\tau\$ that is responsible for momentarily taking the threshold/trigger potential to the opposite extreme.

Please refer to the correct and accepted answer, by James. I will leave this answer here, as I believe it contains some aposite observations, but at its core it does (as Dave Tweed pointed out) miss the point regarding the purpose and function of \$R_\tau\$ and \$C_\tau\$.

There are two problems with this circuit that make it unlikely to work, but both can be fixed.

The first problem is with the combination of the resistor 100kΩ (which I will call \$R_\tau\$) and the 100nF capacitor (\$C_\tau\$) connected to the 555 output. The purpose of these is to present a delay between the output state change and the effect this change has on the voltage at pin 6, the threshold input.

If that delay were not present, then as the switch is pressed, the 555's output would go high, as required, but that would immediately cause a rise in potential at the threshold input (to more than 2/3 Vin), and the output would immediately go low again. This would instantly lower the voltage at the threshold input to below 1/3 Vin, which would cause the output to go high again, and so on, for as long as the switch is pressed. It would oscillate like crazy, which you do not want.

Their solution is to introduce a short RC delay between the output changing states, and that change's influence at the threshold input. This delay is chosen to be longer than the duration you expect the button to remain depressed, but shorter than the minimum interval between button presses.

I think those values should work OK. However, I expect this circuit to oscillate with a period in the region of \$ 2 \times 200ms \$ if you keep the switch depressed.

If this is the behaviour you call "legitimate", then my answer is yes, this circuit can legitimately be used to do what I just described. Here's a CircuitLab version to play with: 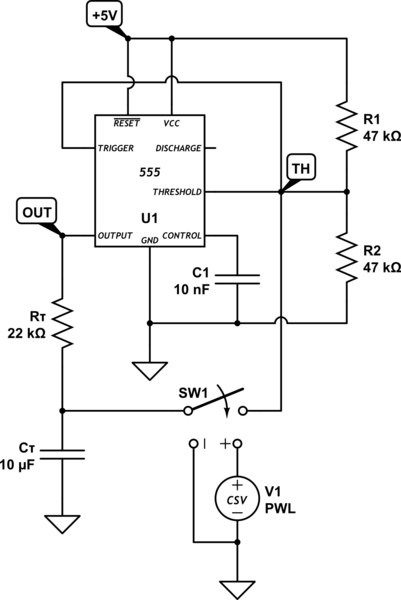 However, I suspect that you do not want this astable behaviour if the switch remains depressed, in which case the 555 is not the solution you need. The thing to grok is that the 555 is designed with timing in mind. Its purpose is to implement time-dependent behaviour, and it contains analogue comparators and other analogue elements that leverage some external capacitive timing element, to that end.

If all you need is something to flip states each time a button is pressed, then you have no need for any kind of temporal consideration. You press the button, it flips. You press it again, it flops. No timing elements necessary.

In that case you need a purely digital solution. Here's one approach: 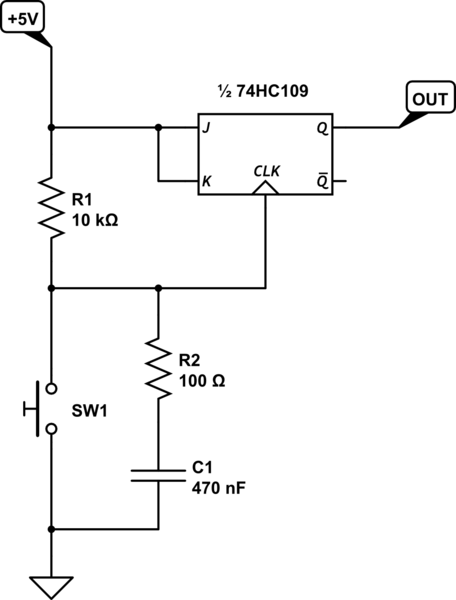 R1 and SW1 together provide a "power-supply-safe" way of producing a digital high that changes to low when the switch is closed. R2 and C1 just mitigate false transitions due to switch contact bouncing.

You could have used this same switch configuration to drive the reset pin of your original 555 timer circuit, if you wish to solve the problem of temporarily short-circuiting the power supply when closing the switch (you may not even need C1 and R2, in that case).

The meat of this circuit is actually the JK flip-flop, which you can read about on this Wikipedia page. You could also use a D-type flip-flop, or any number of alternative purely-digital solutions.

Not the answer you're looking for? Browse other questions tagged circuit-analysis circuit-design 555 or ask your own question.