It's supposed to shift Vin up by 1.4 V, and everything works when I simulate it, but I can't get anything out of the manual analysis.

Does anyone have any tips? 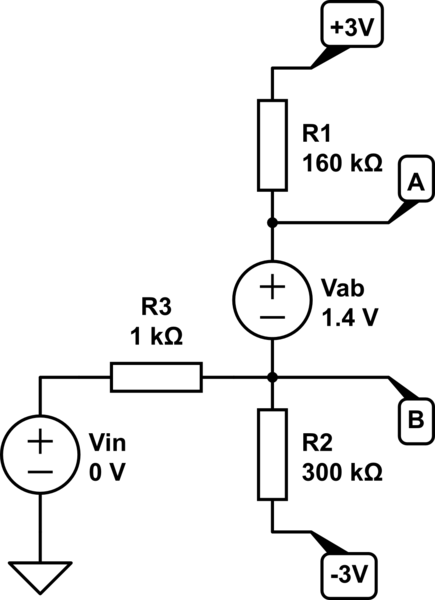 The first step is to find the potential at B, when \$V_{IN} = 0V\$. I'll start by redrawing the circuit with all known potentials (namely -3V and +3V) derived explicitly from an appropriate voltage source: 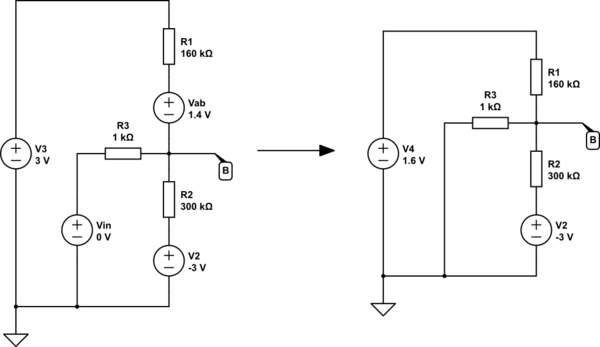 In the left circuit I see that the source Vin, being zero, can be replaced by a direct connection to ground, 0V. I also notice that sources V3 and Vab are effectively in series, and can be replaced by an equivalent single source V4 of 1.6V. These simplifications give rise to the circuit on the right.

Now I want to find the voltage at B, using the superposition theorem. Here we determine the influence of each voltage source in turn, while the others are replaced by short circuits, and we combine the results to find B's potential. Starting with the contribution from source V4, I'll short circuit V2:

This is a simple potential divider, for which we can calculate the potential at B. If \$ V_{B4} \$ is the voltage contributed by source V4 to the voltage at B, then: 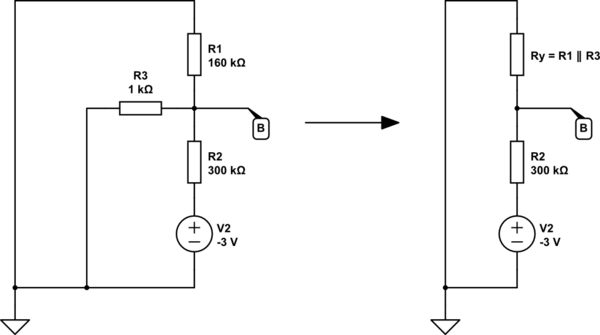 Now we have two expressions for the contributions to the potential at B, which we add to find the actual voltage there:

That seems like a lot of work for "naught". I'm sure there's an easier way, but we did get to use the superposition theorem, which is nice.

From here on I want to treat Vin and R3 as a signal source with its own output resistance, as a distinct entity, separate from the rest of the circuit. And I want to model point B as a resistance connected to some voltage source, or, in other words, its Thevenin equivalent.

We already know the Thevenin equivalent voltage \$ V_T \$- it's 0V. To calculate the Thevenin resistance, we short-circuit all the voltage sources, (excluding Vin and R3, as I explained): 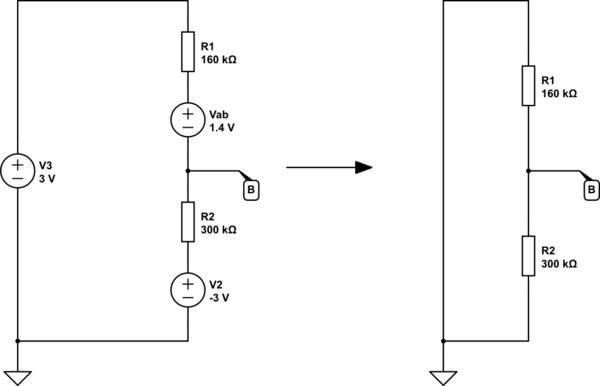 The Thevenin equivalent series resistance here is the combined resistance to ground, that is, the parallel combination of R1 and R2:

At last we can build the simplified circuit like this:

Again, since the Thevenin source voltage is 0V, it can be replaced by a short to 0V, as shown on the right. From there it is pretty clear:

Perhaps the most pertinent point in all this is what happens to \$ V_A \$. Looking back at your schematic, the very place we started, Kirchhoff tells us that:

Not the answer you're looking for? Browse other questions tagged mosfet circuit-analysis amplifier bias biasing or ask your own question.