How to generate a complex sinusoidal signal on a function generator?

I can't relate some of the equations or mathematical expressions commonly seen on circuit analysis textbooks to the real world.

Problem appears when a signal is given in complex mathematical expression, such as \$ x(t) = 3e^{j2\pi 60t} \$. On paper, I can perform mathematical operation or calculate the response with some algebra and calculus and end up with another mathematical expression. But how should I generate this signal on a physical function generator or visualize my results on an oscilloscope?

In Euler's form, the complex signal can be written as

How am I supposed to key in these mathematical expression of voltage and phase on a function generator?

Other than knowing there is a \$ \cos \$ wave running at 60Hz and a separate \$ \sin \$ wave running at the same 60Hz, I don't know where to start. Or do I need to buy two function generators (one generating the real \$ \cos \$ and the second generating an imaginary \$ \sin \$), superimpose the two input wave forms into the circuit under test and read the response on an oscilloscope?

Are these complex signals and mathematical expressions given in the textbooks just purposefully written in a way to hone our mathematics and problem solving skills, or do they represent physical parameters that we can generate and test out experimentally?

An exponential representation with an imaginary exponent is a helix in complex space. The sine and cosine signals are the projections of that helix onto the j-T and 1-T planes. Note that, unlike the purely mathematical approach, the "sine" and "cosine" labels that might be associated with quadrature waveforms are arbitrary (since there's no objective time "0" unless you go back to the Big Bang). Rather, the critical thing is they're highly orthogonal (as close to 90 degrees apart as the application requires).

Let's say you have the following circuit: 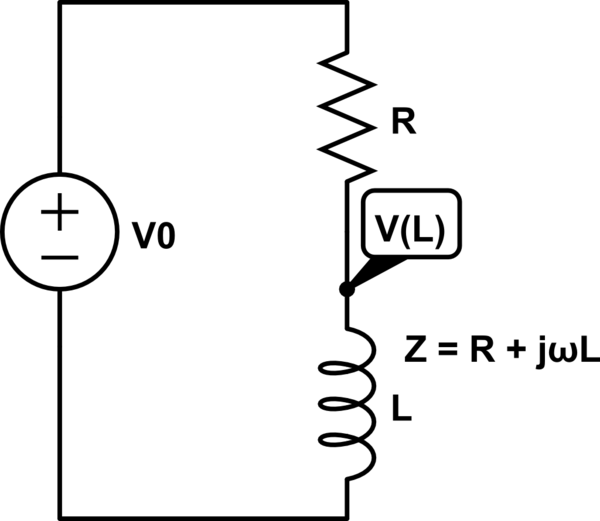 and without knowing anything about the angle or imaginary/real parts involved, let's put V0 as our reference, thus meaning it's related angle would be at 0.

You can see that this voltage will have a real part and an imaginary part and you can measure this on an oscilloscope. When you do, you will see a sine wave (assuming that V0 is also a pure sine wave) whose value is the coefficient of the exponential complex representation (r), but looking at the resultant sine wave on it's own will only yield you 2 pieces of info, it's amplitude and it's frequency.

From my understanding, you are wanting to generate a voltage straight from your device to, say have a X amplitude at angle θ. you will have the ability to dictate the amplitude. but if that sine wave is on it's own, there could be no means of measuring anything relative.

As a numerical example, in the circuit let's assume:

so V(L) has a peak of about 3 V with a frequency of 50Hz, having been shown that it can be expressed in polar form, but you can also generate the exact signal, this goes to show that showing it in polar form requires some sort of reference.

EDIT: there also a more comprehensive and fundamental approach to your query here.

How am I supposed to key in these mathematical expression of voltage and phase on a function generator?

Surprised no one answered this, but this is actually really easy to do. Your function generator has a phase setting:

Calculate the phase angle (as you have done in your question) and plug in the phase angle there. If you do this with a cable running from CH1 to your oscilloscope, you will see ... absolutely nothing happen.

Phase is the time delay of a waveform. With an angle of zero degrees, your waveform is not delayed. With an angle of 180 degrees it is delayed 1/2 of a cycle. Your scope will not show you that half cycle of delay since it just shows you the most recent trace at each instant, so you won't record that the waveform originally (seconds, minutes ago) started some milliseconds later than it otherwise would have.

If you want to see what that phase setting does on your scope, plug in a second cable into the trigger out on the function generator. Then plug it into the trigger in on the oscilloscope. You'll now see that your waveform is delayed. Put in 90 degrees and you can shift a sin into a cos or back again.

Are these complex signals and mathematical expressions given in the textbooks just purposefully written in a way to hone our mathematics and problem solving skills, or do they represent physical parameters that we can generate and test out experimentally?

A complex signal is the sum of two real signals, one cos and the other sin. Provided you have two cables (in this case CH1 and the trigger out) to carry those two signals, you can in fact measure them. With just one cable then no you cannot since a delay is relative, it is the difference between the timing of two signals. If you only measure one of the two times you cannot calculate the difference.

They have FUNCTION {SQRT SIN SQ COS} and dozens more options, but no examples how to concatenate functions, which seem to be limited to two channels. But this is simply a 60 Hz sin shifted by 45 deg phases relative to some reference not generated.

It's a script language you have to learn how to program with the right syntax with the programming manual.

You can also use GUI functions in MATLAB and connect the functions with boxes or Visual Basic. But it's a learning curve worth doing if you like to do complex generators.

I suppose you could do this easily in a spreadsheet and discretize the time function into a file and loop it.

This is what your signal looks like with the Sin reference 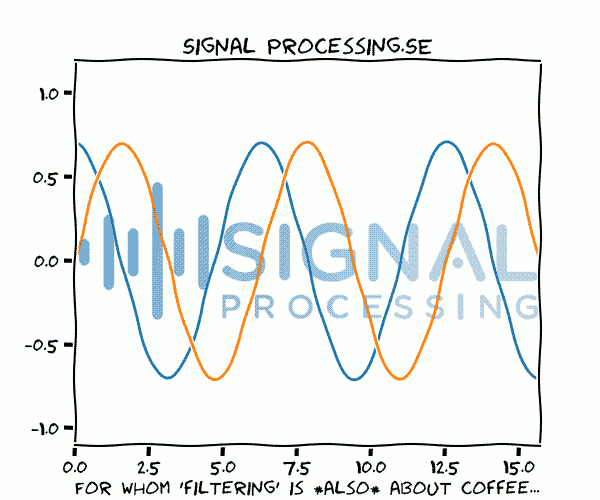 0
How to amplify a signal to trigger a function generator?
1
HP8116A Function Generator Signal Problem
5
Why a sinusodial signal expressed by a cosine function instead of a sin function?
0
Function generator for OFDM signal
0
Is it possible to generate user-defined signal using an android phone?
1
What's the phase relation between the sine wave and the sync output from a function generator?
0
how to reduce signal noises
0
How to measure the frequency response of a waveform generator?