Why do ham radio operators say that a full wave dipole isn't resonant?

Every reputable antenna book that I've read says that dipole antennas are resonant at integer multiples of a half wave length.

For a dipole to me this means that resonance occurs when an AC source is applied with frequency that has a wavelength which allows an increase in the amplitude of the standing wave on the antenna to occur, because the applied source "tops up" the circulating energy at exactly the right moments, due to the resonant length.

Everyone knows that a center fed resonant 1/2 wave dipole has a feed point impedance of about 70 ohms with no reactance.

So the impedance is low with no reactance.

My understanding is that only for a resonant dipole does there exist any points where if split at those points and used as the feed point there will be no reactance.

For dipoles which are odd multiples of a 1/2 wave of the frequency of the applied source in length, the points where there is no reactance are at the current maximums or current loops, because it is at those points that the current is in phase with the applied votage source and the out of phase voltage is at the zero crossing point.

For a full wave dipole with feed point at the center, the voltage of the standing wave at the feed point is in phase with the applied source and at a maximum value, whereas the current is 180 deg out of phase with the source but at the zero crossing point.

This means the feed point impedance is high with no reactance.

To me it seems that a full wave dipole is a resonant antenna, and if the feed point is in center it has a high non-reactive impedance.

Moderator Note: The same question was asked here at Amateur Radio.SE so interested readers may want to visit that page too. To avoid any appearance that this situation is the norm, duplicating questions across different SE sites is generally strongly discouraged.

There are several versions of definitions of resonance.

So the conflict of assumptions is that non-resonant antennae do not store energy and yet energy storage elements can radiate through non-resonant wires.

But in effect all standing wave antenna have perfect resonance and those that reflect some back to the source are imperfect resonators.

The assumptions require context to resonance with a reactive gain above unity or a passive amplifier with the ideal being conjugate reactance cancelling to result in a resistive load.

Viz. A non-resonant antenna is made resonant with the conjugate matched impedance. this is the case for AM coil antennae with very high Q for voltage amplification.

In the series circuit current goes through a maximum at resonance. This circuit would be equivalent to feeding a resonant half-wave dipole at its center. We call this a resonant antenna.
Note that if we feed this series circuit with a current source (where current is constant-amplitude), voltage at its terminals would go through a minimum at the same frequency. If we have a minimum at a certain frequency, the term used might be anti-resonant.
Go figure - in this series-circuit, we prefer the voltage-source feed rather than current-source feed, since we most often describe a series-circuit as resonant. Same for the center-fed half-wavelength dipole.

A non-resonant antenna would be resistive at all frequencies - something difficult to achieve in a universe with finite speed-of-light. In our universe, impedance of free space is 377 ohms. 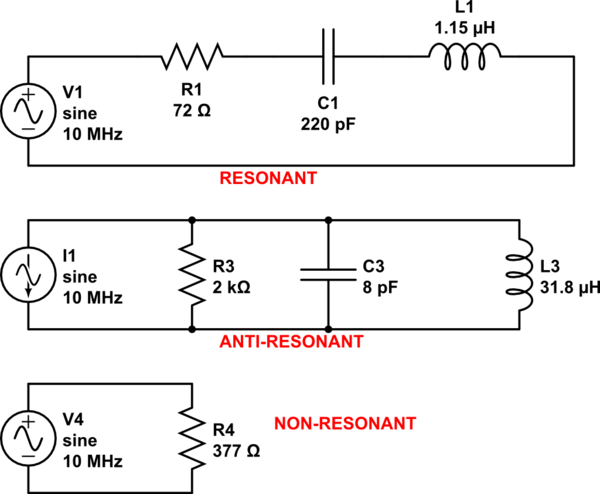