In the following (partial) circuit, the transistor is usually in its regular forward active mode. However, when the supplies collapse abrubtly - e.g. during power-down - the base-emitter junction can be transiently reverse biased with more than the allowed 5 V, due to the slow discharge of C1.

Do I need a protection diode from the base to one of the supply rails ?

I am wondering because C1 is fairly small and e.g. MOSFETs and diodes can handle avalanche breakdowns with some energy without bad consequences. This answer also suggests that only "sustained" reverse breakdown has bad consequences. 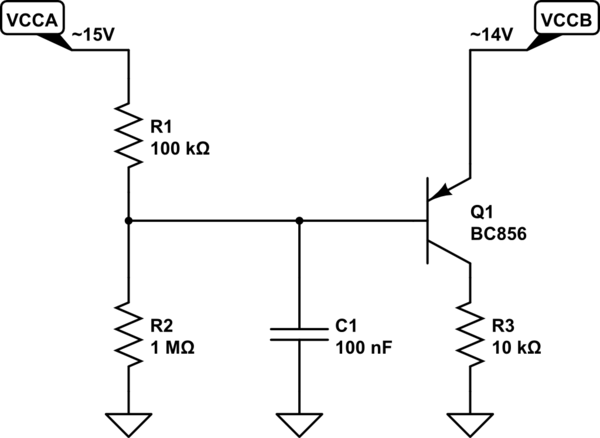 You will be exceeding the absolute maximum voltage on the datasheet (5V). Unless you feel like doing a lot of testing and characterization on many samples from different manufacturers under a variety of conditions in order to reduce the risk, a diode may be the least expensive safe solution.

If the sole pull down is that 1M then you can’t stand much beta degradation.

You could perhaps also consider replacing the BJT with something like a BSS84 MOSFET that has no problem with up to +/-20V on the gate- and has a compatible pinout.

It depends on the conduction "edge effects" and storage energy of capacitance on both sides and including the junction.

Breakdown can be either soft (Zener effect) or hard (Avalanche effect).

The hard effect caused by conductive filaments of nanoscale particles causing the avalanche effect that now discharge the energy stored across the junction and can short circuit it, unlike a fuse, merge the conductive particles by spreading heat.

Leakage current doubles every 10'C due to the Arrhenius Effect which reduces the effective resistance.

Since there are no specs for the amount of charge energy (E=1/2CV^2) that may be dumped into a reverse BE jcn, it is unwise to assume anything, but verify all suppliers of such parts with stress testing.

So although the 100k provides DC current limiting from the supply, the cap C1 base cap now may cause a high energy fusing of a nanoscale filament particles that spreads heat like a tiny lightning bolt inside the PN junction and fail. However without C1, it "might" not fail as the reverse bias capacitance is quite small and only increases as the voltage collapses towards 0. But don't assume this is generally true.

So yes it would likely fail anywhere above the -5V and the best policy is respecting the datasheet limits with a reverse diode across Vbe (preferred) or a series diode with lower leakage (less likely).

However, transistor Base Collector junctions do tend to fail with the soft effect and so can make do as high voltage Zeners at very low current levels. I did this once for 150V on my 1st colour TV and replaced a high voltage Zener with a 2N5401 (?) 45 yrs ago CE jcn.

Not the answer you're looking for? Browse other questions tagged bjt reverse-breakdown avalanche-breakdown or ask your own question.