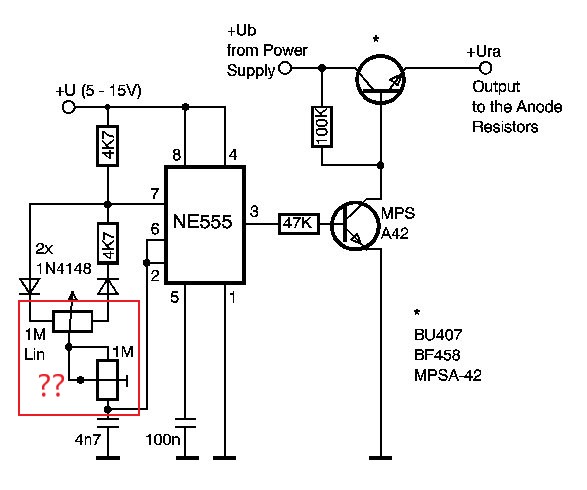 What are the potentiometer connections being described here? Is there more than a single pot. being used (the text only mentions one?) Thanks for any help understanding this!

and discharging the capacitor through a resistance of

The on and off times will be proportional to the charge and resistances respectively, whereas the total time will not vary much with changes in \$\alpha\$.

The brightness will be related to Ton/(Ton+Toff) if the frequency is high enough to eliminate visual flicker.

Note: You should at least have a series resistor in the collector of the MPSA42. The way it is "designed" now it has an hFE-dependent current flowing at near Ub voltage across the transistor. That will tend to fry the MPSA42. At (say) 12V low-voltage supply, you'd get a base current of around 200-250uA, so collector current would be around 20mA (see typical DC current gain curves in the datasheet), leading to power dissipation of 4W with a 200V Ub. For a very brief period of time, followed by a 'pop', a nasty smell, and destruction of both transistors. So add something like 100K in series.

The lower 1M preset is used to set the frequency as its resistance is common to both charge and discharge paths of the 4n7 capacitor.

Then use the upper 1M pot to set the duty cycle.

As the 1M preset is wound up (as its resistance is increased) it will not only reduce the output frequency but it will also increase the minimum achievable output high and output low times, that is to say it will reduce the obtainable duty cycle range available from adjusting the upper 1M pot.

Not the answer you're looking for? Browse other questions tagged pwm 555 nixie or ask your own question.

3
Reducing the brightness of Nixie tubes