Why isn't the D2 LED ON when the transistor is ON?

I attached to this question a circuit that I can't seem to understand. In the lecture I watched, we use the transistor (in saturated mode) as a switch to kind of get a positive and negative output depending on whether or not we forward bias the base-emitter junction. When the transistor is off, only the D2 LED is on, which is fairly easy to understand. However, when we forward bias the base-emitter junction, D2 appears to have been completely switched off and this time only D1 emits light. I'm guessing it might have something to do with not enough current being pulled into D2 but I might be completely off the mark.

And when the transistor is turned on, it has a Vce drop of about 0.2V.

Adding the voltage drops of the transistor and red LED D1, that is still less than what green LED D2 needs to work, so there is not enough voltage over green LED D2 to turn on.

LEDs (all diodes) are non-linear devices. If you look at a voltage-current curve, you will note that the relationship is not a straight line as it is with a resistor: 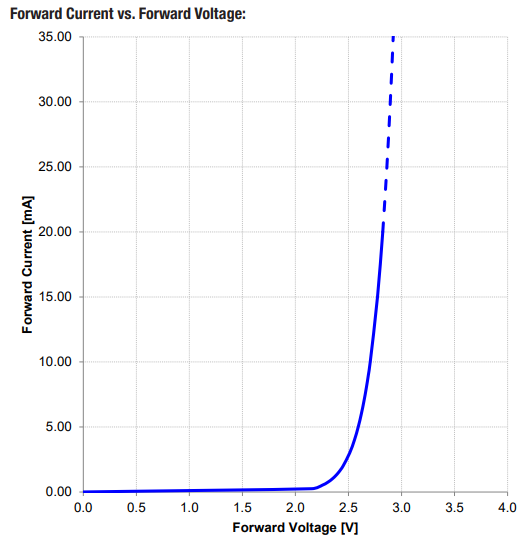 From 0V, as voltage increases, not much happens until the forward voltage (Vf) of the diode is reached. After that point, current increases exponentially. If there is too much current, the LED will fail.

It is for this reason that current through an LED needs to be limited. (For example, with current-limiting resistors.)

The Vf point for LEDs differs. Even for two identical LEDs, this point may be slightly different due to manufacturing tolerances. The one with a slightly lower Vf will inevitably have higher current. In the long term, the one with higher current will fail before the other, and start a cascade failure. 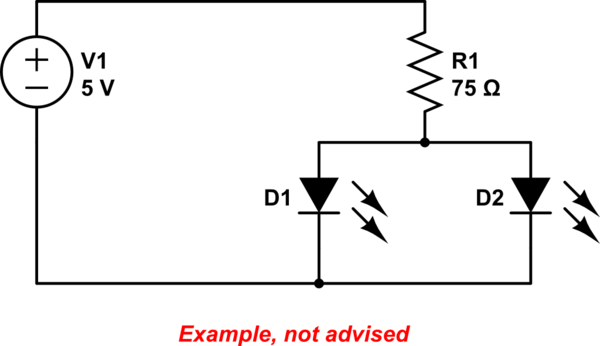 In the above schematic, imagine that the LEDs have a Vf of 2V. The desired current through them is 20mA. If they drop 2V, then that leaves 3V to be dropped across a resistor. Current through the LEDs in parallel will be combined in the resistor, thus 75Ω is calculated to limit current to 40mA.

In this scenario, it could be the case that D2 has a slightly lower Vf, and actually receives more than its 20mA maximum. While this might not cause any apparent damage in the short term, sustained current exceeding its limit will eventually cause it to fail. When that happens, D1 will "see" all 40mA, and fail much more quickly. 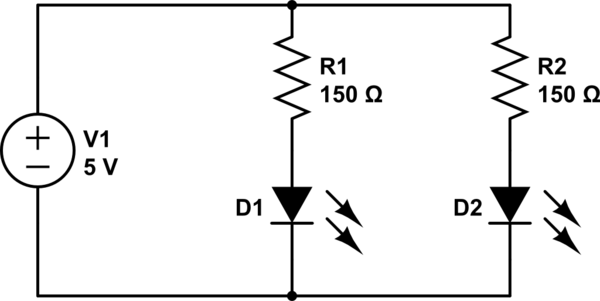 This is a better way to limit current to two LEDs. If D2 fails for whatever reason, R1 will still limit current for D1 appropriately.

This effect should be even more apparent when you have two different diodes, where the Vf is much less similar between them. In parallel, the diode with the lowest Vf will conduct more readily and current through it will increase quickly.

If you increase voltage, you effectively only increase the current through D1, why? Because it still has a Vf of 1.8. Imagine that you increased the supply voltage to 10 volts. R2 will now have 8.2V across it, limiting current to 37mA. If D1's maximum current is 20mA, it will very soon fail. Once that happens, voltage will rise to the 2.1V necessary to light D2. Now the voltage across R2 will be 7.9V and current will slightly change to 36mA. If D2's maximum current is 20mA, well, you can see that it fails, too.

This is an oversimplification, but hopefully it will demonstrate why LEDs in parallel behave the way they do.

Was there a specification for the voltage drop of the LEDs and the transistor curves/gain? You will need these to fully analyze the circuit.

But in general, when the transistor is saturated, the voltage at D1 will be about 0.2V lower than D2 (the Vce at saturation). So unless the LEDs are different, I don't see how D2 would be off.

LEDs are like Zeners and there needs to be enough voltage difference for this to work as expect toggling D1, D2.

When the transistor switches "ON", the collector must drop more than 25% lower than when D1 was "OFF" for D2 to go "OFF" completely and turn "ON" D1. Here both were on at the same time, so the incorrect "type" of LEDs were used.

RED and YELLOW are about the same voltage and not much different from old GaP Green, so that won't work well.

30 yr Old Technology LEDs used GaAs and GaP which were very dim compared to present day which are higher voltage for green, blue and white but up to say a 1000 times brighter.

Ultrabright LEDs which due to change in chemistry, and a transparent substrate with a reflector operate at 2.1 or 3.1V with a wide tolerance depending on quality and current. But this 1V difference makes this circuit work with the right different LEDs.

Thus, the transistor here needs to try to sink all the current that D2 is drawing, and this means a voltage drop from 3 to 2V to turn off D2. 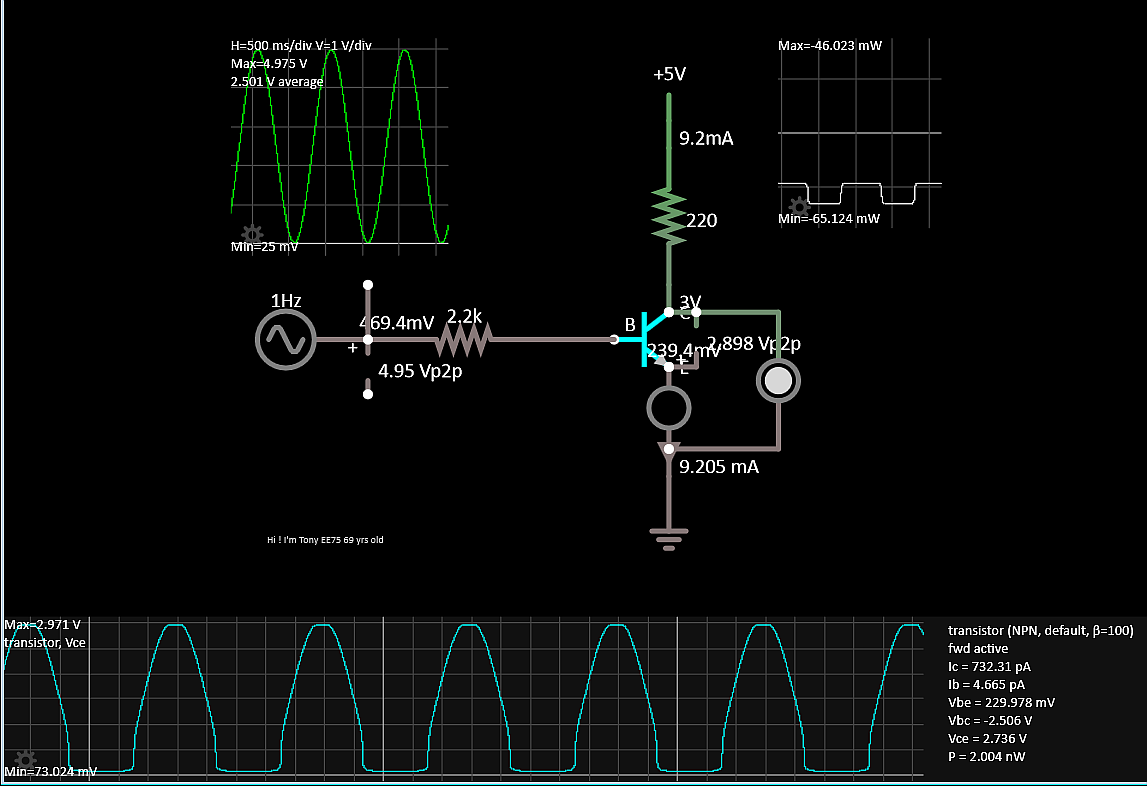 Here I offered a sine wave centred at 2.5Vdc and an input sine slider from 0 to 2.5V so the input can swing from 0 to 5V so you can see the transition smoothly.

Not the answer you're looking for? Browse other questions tagged transistors led bjt or ask your own question.

3
In a BJ-Transistor, why do we need to bias the junctions?
1
cutoff state of transistor
1
Transistor Common Base configuration
4
Why might the collector-emitter voltage for this transistor be so high?
0
Confusion with transistor modes
2
Bipolar transistor as a switch
0
Current flow in a BJT transistor
1
BJT (Common-Collector Configuration)
0
How is the Collector-Base region reverse biased in Common Collector configuration of BJT?
0
Voltage drop across junctions in a bjt transistor