When I put the following narrowband active bandpass circuit on a breadboard, using a MCP601 single-supply CMOS op-amp, it just oscillates at about 339 kHz with a Vpp of about 1.36 V at a supply of 5 V. When I apply a signal generator (sine wave) to the input, sweeping between 100 and 900 kHz, it doesn't seem to do much at the output other than mix with the oscillation sine wave. How do I solve the oscillation problem and get a working bandpass filter? The objective is to have an active bandpass filter with a center somewhere in the low to mid kilohertz range. Right now I don't care about precision of the center frequency nor precision of the bandwidth. Tuning that can come later once I get a better grasp on the oscillation issue. 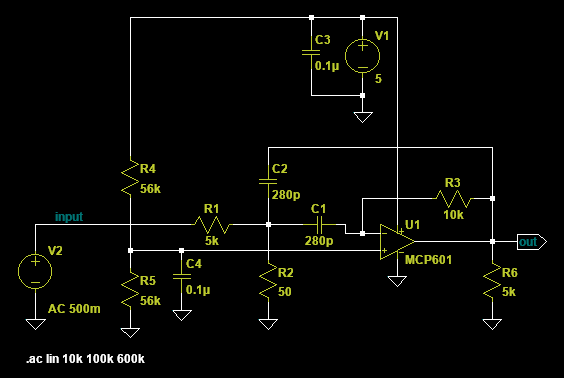 I realize I can design a passive bandpass and amplify the output of that and call it a day, but I'd prefer first to understand what I'm doing wrong with this active design before I give up on it.

Side note: I don't have a working LTSpice MCP601 model but when I simulate with other single-supply CMOS op-amp models that come with LTSpice, I get good results (i.e, it acts as a bandpass in kHz range without oscillating).

UPDATE: I made the mistake of using R6 to model the next stage of the circuitry on my breadboard, which was in actuality a higher impedance than 5k ohms. Once I removed that circuitry and replaced it with an actual 5k resistor, I had better luck. Perhaps the lower-Z load is what solves the oscillation problem? Although I'm not entirely sure why. So if that's the case, I think the question is still valid in terms of understanding how to properly size the output load on this active filter to avoid oscillation (where next stage is high-Z)?

UPDATE #2: Just swapping various resistors out for R6, the best seemed to be R6=10k (which, notably, is the same as R3). I say best because it didn't oscillate at 10k and there was least amount of voltage attenuation.

There is opportunity for positive feedback to Vin+ with layout issues. The ground loop to C4 must be carefully selected not to share output current with anything by capacitance or loop inductance.

The GBW product of your Op Amp must higher than a 1st order system.

In fact, my discovery was \$ GBW min= Q^2 f_o Av\$ for Q>>1 This will reduce your gain margin and transfer function if not met. Thus, in order to solve this you must cascade lower Q BPF filters to achieve your result or use the part with the required GBW.

TI Filter designer will easily verify GBW as I figured out the sensitivity for the required Q. (Not the oscillation result though, just the required GBW)

This design appears to demand a BPF performance with f0 around 820 kHz with a BW less than 160 Hz. This translates to a Q well over 5000 whereas Q > 100 is impossible to achieve any accuracy. You would need a GBW product with doesn't exist yet well over 1 GHz to achieve 0 dB gain at centre frequency and it would still likely oscillate from stray capacitance on the order of 0.5pF to the non-inverting input. At these Bandwidths all impedances must be well under 500 Ohms.

The attenuation ratio from 5k to 50 Ohms is the tell in this insane design.

If you needed a Q of > 5k you would use: Ceramic resonator or custom Xtal resonator (Q=10k to 100M $$$ OCXO) or some mechanical resonator with 10 ppm tolerances. Alternatively you could gang 1000 Op Amps each with a Q of 5 and maybe have a lot of ripples and unexpected spikes and notches from mismatched phases and 1% parts. Also the GBW of each Op Amp would need to be 25* fo for unity gain error correction to within 1 deg.

Not the answer you're looking for? Browse other questions tagged active-filter band-pass or ask your own question.