SDA and SCL for I2C are always low

I designed a PCB board with some sensors (gyros, accelerometers, and etc.) using the I2C protocol to communicate. However, when I use an Arduino UNO as the master, I'm not able to see the waveform of both the SDA bus and the SCL bus. They remain static at ~400mV when measured by an oscilloscope. When I use a different board (such as this one) with the same test set, I can clearly see the waveform that SDA and SCL produces

Usually, it either means that something is shorted, but I didn't see any problem when I used a multimeter to check the continuity of all the vias for SCL, SDA, VDD, and GND. The resistance between SCL/SDA to GND is ~1M Ohm.

There are actually 3 I2C lines on the board to avoid conflicting I2C addresses, and none of them work. The simplest line only contains a gyro and an eCompass. The schematics are below: 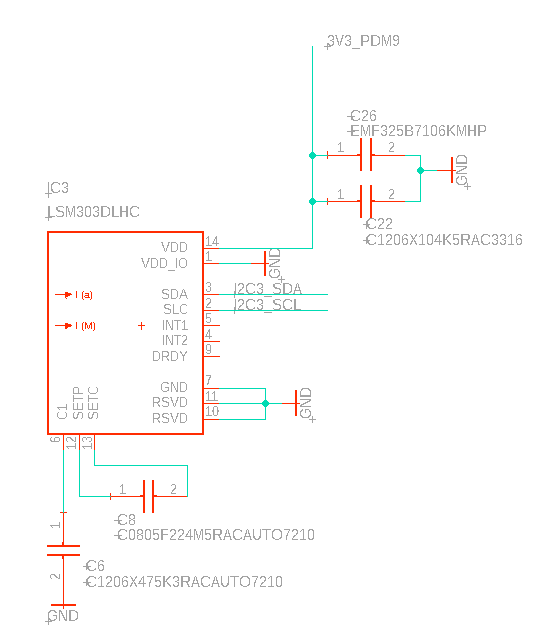 You can find the full EAGLE schematics and board files here.

There are several issues with your design.

The first of these is probably sufficient to cause the problem.

I'd suggest first tidying up your schematic. Use the power supply symbols (eg. +3V3, +5V etc.) rather than net labels for clarity. Use the boxed & pointy type of net labels throughout ("Xref" checkbox in property dialog) and make sure it's obvious which wire they're connected to (don't have the label offset from the wire).

Once that's done, check everything for potential mistakes. Go through each datasheet, bring up the "pin configuration and function" section and check the schematic pin by pin, also checking the allowed voltages. Then redo your PCB with slightly more generous clearances and make sure there are no DRC violations.

Not the answer you're looking for? Browse other questions tagged voltage pcb pcb-design i2c or ask your own question.