Edit: I think using the term "bus" might be wrong here. A "bus" needs to be large enough to facilitate an entire DDR4 stick's bandwidth to the Northbridge. The connection to each individual pin probably doesn't count as a "bus", maybe "pin" in the right term?

I'm sure data busses and pins differ in size, I suspect depending on how much current needs to flow through them. Household foil is roughly 0.016 mm thick. Can a connection pin between RAM and the motherboard be that thin?

Since this is an odd question that depends a lot on the scenario, probably, I'll explain the context. I'm starting to get my feet wet on the subject of computer engineering purely for the reason that I want to prove an idea is possible. So I decided to just try it. Worst case scenario I try something too difficult and learn something in the process. My idea is a micro-controller which physically intercepts the DDR4 RAM slot of a desktop PC with a thin sleeve. Like so: 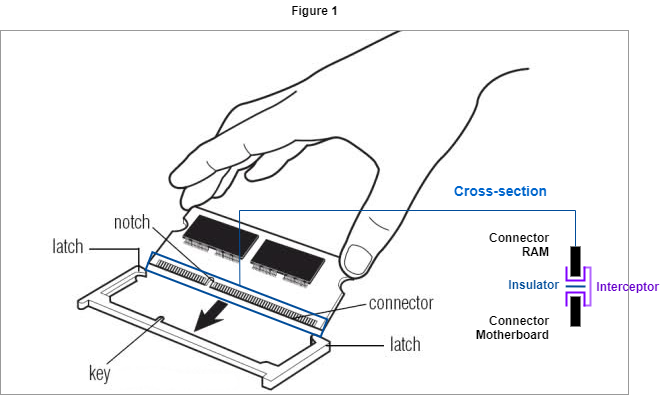 Figure 1: Interceptor Sleeve, a paper-thin layered sleeve sits between the RAM slot and the motherboard. Normally, the Interceptor sleeve completes the connection between the RAM stick and Motherboard without interference. However, a transistor along this connection allows frames (or whatever they're called with busses to DDR4, I'm only familiar with the simpler CAN bus so far) from the motherboard to be conditionally intercepted by and replied to artificially, without passing the frame further. Likewise, while connections from the motherboard are being are being intercepted for a specific address range, the Interceptor can send its own frames over the RAM connector to read or write. In this way, the system can read and write to specific memory ranges while allowing

I only plan to test this with one single pin on the RAM at first.

Nevertheless, I grabbed a powered down mobo and RAM and found that three layers of foil could fit between an inserted RAM stick and the connection. So if a bus/pin can be as thin as tinfoil, those three layers should be the equivalent of a pin, insulator, and the other "side" of the pin as shown in Figure 1.

A connector can be that thin, and in fact the card edge connectors on DIMMs are extremely thin: According to this manufacturer, their hard gold plated connectors are likely on the order of 30 microns (for 1 oz copper) plus around 3-6 microns nickel followed by 1-2 microns of gold.

However, there are other issues with your design - your drawing shows an unrealistic mechanical situation with the interceptor with two parts hitting head-on, while in the card edge connector, the connector slides over the plated contact on the board.

Furthermore, there's a much larger issue - the electrical design of your interceptor. DDR4 handles signals at clock frequencies of nearly 1 GHz (and correspondingly higher harmonics/double-edge data signals). In this situation, every bit of wire you add acts in some way like an antenna, reflection, etc unless the wiring geometry is precisely controlled to provide a consistent transmission line impedance.

Furthermore, the pins are combined in groups that all share clocks, meaning that you can't just interact with one line - you'd need to interact with a pair, while maintaining their relative geometry, matched path lengths, etc. Otherwise, you'll introduce unacceptable clock skew on whatever data or address line you chose as your victim.

Even if you did intercept just one pin (and its differential pair partner), you don't get much info and would need to intercept the clock and other pins to make sense of it; simply knowing that at 3.1415926 seconds after startup, the fourth data pin was '1' rather than '0' doesn't tell you anything if you don't have the address and operation in question.

If you really want to do this, you'll need to degrade memory timings significantly, and you may as well just put an entire adapter in-line, which has impedance-controlled wiring, and socket, and any interceptions you care about, run to high-speed pins on a suitable chip (likely a high-end FPGA). A microcontroller won't cut it - microcontrollers generally don't have their core logic clock running at 800 MHz, let alone have I/Os that can sample on both rising and falling edges of such a fast clock.

Not the answer you're looking for? Browse other questions tagged computer-architecture bus motherboard ddr4 or ask your own question.

1
Is it OK to use the USB 5v pin as power source?
0
What is the difference between source-synchronous and source clocked signals in DDR4?
0
DDR4 DIMM/component, different CL?
1
Termination Regulator for DDR4
0
SPD I2c Address for DDR4 SODIMM
1
DDR4 clock termination