We've tried 60 watt LED light bulbs on a ceiling fixture and a lamp in the house. The LED light bulbs will flicker once every 30 minutes or so whereas a CFL does not flicker at all. Neither of the problem fixtures are dimmers. It's an older house built in the late 1940's. We have ceiling fixtures elsewhere in the house with LEDs with no problem. Hoping we just got a bad batch of LEDs

Is there a reason why the LEDs would flicker when the CFL bulbs do not? Are they more prone to electrical wiring issues?

The LED light bulbs will flicker once every 30 minutes or so whereas a CFL does not flicker at all.

HVAC, water heater, etc flipping on or off and injecting noise into the power lines. Your LED bulbs are extremely sensitive to it because they have cheap power supplies.

Is there a reason why the LEDs would flicker when the CFL bulbs do not? Are they more prone to electrical wiring issues?

Yes absolutely. It is due to the way cheap LED bulb power supplies work. A typical LED bulb is made of ~3v diodes arranged in series hooked up to a rectifier and a current limiting element (either a capacitor/resistor as in this diagram or more commonly in the USA a linear regulator on the DC side): 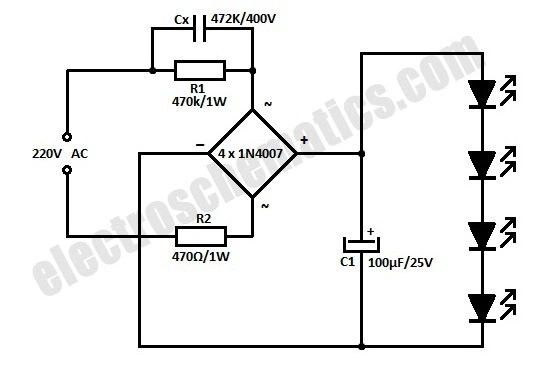 In this design the LEDs are stacked up to be close to the rectified mains voltage so that losses are low in the resistor/regulator. This works great as long as the mains voltage is perfectly stable. However, if any load on the line switches, the voltage will fluctuate. Since the diodes summed forward voltage is very nearly the rectified line voltage, even small fluctuations are enough to drop below the forward voltage and turn off the lights resulting in flickering. If the capacitor were very large, or some kind of regulation were present in the circuit, this would not happen, but that would be much more expensive so you don't see it in cheap products. Similarly, they could put fewer diodes in series resulting in more headroom between the forward voltage and the rectified line voltage (and more dissipated across the resistor/regulator), but this is a nonisolated design - everything is attached to mains voltage, so by regulation it cannot have any exposed metal heatsinking. Without heatsinking, dissipated power must be kept to an absolute minimum as there is little ability to get heat out.

There is a good article here:

Fluorescent lights actually do flicker but the frequency will typically be high and the light dims a lot less at it’s minimum point than LEDs.

LEDs tend to be instant on / instant off and run from DC. LED circuits can be designed to reduce flicker by adding capacitance and using a full bridge rectifier or inverter to convert AC to DC, but cheap Christmas light strings may not use a full bridge rectifier, which would cause flicker at around 50/60 Hz. Additionally, if the circuit does not include enough capacitance the intensity of the flicker will increase.

My best guess is you've got a bad connection or other resistance in the wiring (maybe oxidation on switch contact etc) the comment to change bulb position(s) or feedback on trying this would help rule out the bulb itself.

Is this the stair light?

Also, question should clarify whether these are flickering when the power is ON, or OFF.

Assuming OFF, it's because of stray power on the circuit, usually from electrostatic coupling from other cables (though degraded insulation is also a possibility).

I've even seen a CFL flicker on a (UK, 230V) dual switched circuit (stair light) though CFL are much less prone to it.

In this circuit there's an upstairs switch, and a downstairs switch, both SPCO (changeover) switches, and a 2-core cable (+earth) between them. In this arrangement, the lamp is ON when both switches connect to the same core, and OFF when one switch connects to the other core.

This leaves power connected to the "off" core via the capacitance between the cores for the whole length of the cable, and you can see half the supply voltage via several hundred pF, capable of sourcing tens of microamps. (Why only half? There's a similar capacitance to that Earth line).

That's enough to slowly charge up the capacitor in a LED bulb (and rarely in a CFL) until it turns on momentarily, drains the cap, off again, and repeat.

Other circuits may exhibit this to an extent, but it's particularly bad in stair lights for the above reason.

If this is what you're seeing, it's worth having the wiring checked for degraded insulation, but otherwise it's a curiosity rather than a problem. Any incandescent bulb, however low power, on that circuit, will drain the stray power before it becomes a problem.

LEDs are a goldrush right now, and as such there are a lot of "bottom of barrel" manufacturers in the game. People who buy mail-order or who buy cheap are particularly vulnerable to encountering this crud. Even a UL listing is no guarantee; UL certifies safety, not quality. Everything at CostCo and huge swaths of what I see at box stores are on my "never buy" list.

However, there are also bona-fide electrical system faults that can cause this. Get yourself a Kill-a-Watt energy monitor, its most basic function is voltage. Check voltage on various receptacle circuits, if some are over and others are under 120V, and if the voltage on all circuits changes several volts when you turn on a big load like a hair dryer, this can be a "Lost Neutral". That is a power outage at the pole, which the power company will fix for free, but it's devilishly difficult to detect. If that is the case, then a motor startup surge is causing a wild voltage swing, driving the LED circuit to say 30 volts (whilst the other leg is 210V), which is causing the LEDs to misbehave.

A lost neutral is not certain or even likely. But it's such a dangerous problem, and such an easy and free fix, that it's worth checking for it.

1
Occasional light flicker, how to find source of issue