KVL for a circuit with Zener diode

In my book the KVL for the above circuit is written as: Vss+Ri+vD=0. I really don't understand why all the signs are positive. I would go around the loop and write Vss-Ri-Vout=0 or Vss-Ri+vD=0. 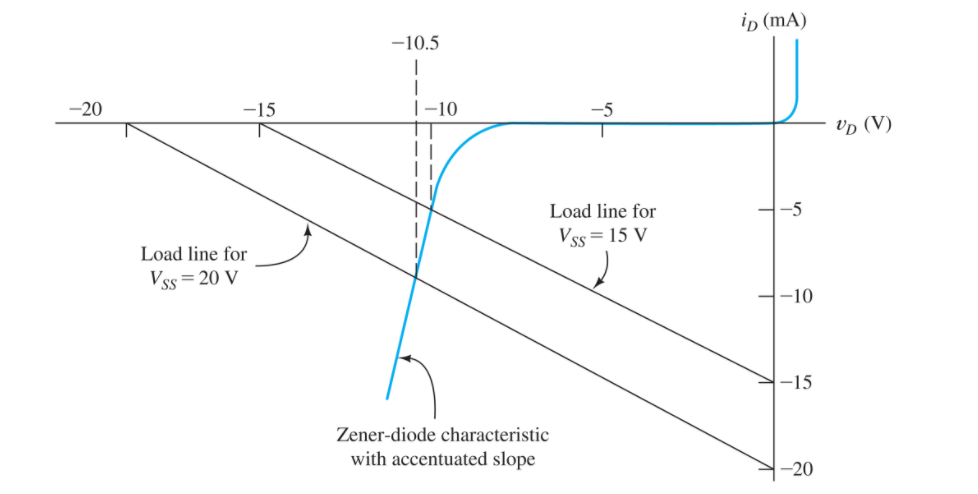 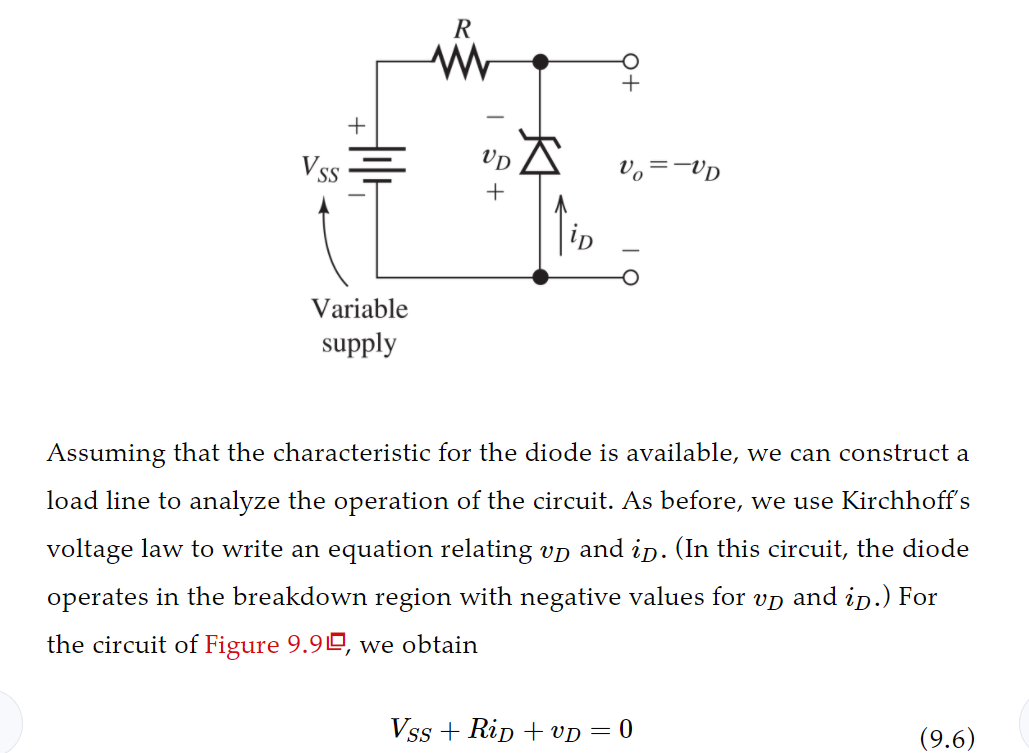 Your schematic wasn't completely annotated. The following is:

For KVL, you can go around in either direction and you should get the same result. Let's do both.

Of course, \$V_{_\text{D}}\$ is negative according to your schematic's shown polarity for it, not positive.

The reason all the signs are positive is because some of those \$V_{SOMETHING}\$ values may work out (and in fact must work out) to be negative.

If you know what all the polarities of all the \$V_{SOMETHING}\$ values ahead of time, you could do as you say, and add the ones you know to be positive, and subtract all the ones you know are negative, to have a expression that must equal zero. This approach is a legitimate application of KVL.

I could describe this as a walk around town, going from McDonalds up the hill to Walmart, then down the hill again to the gas station, over the bridge and back to McDonalds. You absolutely must end up at the same elevation you started with (unless you're flying, or swimming in tarmac). But in that scenario it's clear when you're going uphill, adding to your elevation, and it's obvious when you're descending, subtracting from your elevation, all information which may not be so apparent in whatever circuit you are analysing.

If we assume the bottom node of this circuit (the battery negative) is at 0V, I know for certain that it's impossible to have a negative voltage appear anywhere else, because there are no reactances like capacitors or inductors, and there are no dynamic voltages anywhere. Therefore I can say with absolute certainty that as I take a walk around this circuit counter-clockwise, starting at the bottom of the diode, the first jump across the diode has to entail an increase in potential. That is, I know that the top (cathode) of the diode is higher in potential that the bottom, and I can add.

As I continue my journey, I am certain that the jump across R will incur another rise in potential, because of what I know about the relationship between current direction through, and voltage polarity across resistors. So, again, I add.

When I jump downwards across the battery (from its positive terminal to negative), I know that this will represent a decrease in potential, because the negative terminal is obviously lower in potential than the positive, so I subtract. Now I am back where I started, so I know I must have traversed a total of zero volts, giving us this expression:

After you solve everything, you will get positive values for all terms, because you accounted for polarities ahead of time, in the equation itself. Alternatively, you could go clockwise around the loop (as you did), and get this expression:

Again solving all the equations would yield positive values for all terms, which may seem odd considering we have literally negated every single one. Don't forget, though, the equations include the KCL ones, and in the latter clockwise version, current was also reversed (negated).

Knowledge of polarites ahead of time, and using that knowledge to construct expressions containing corresponding additions and subtractions, is a legitimate application of KVL and KCL, but only works if you know the polarites beforehand.

Your sticking point seems to stem from the fact that frequently one does not know what the polarities are, or current directions. If you were blindfolded, and unable to ascertain whether you were going uphill or downhill during your walk, you are simply forced to build the expression:

This expression is also valid, but the difference is that solving all the equations would necessarily yield negative value(s) for one or more terms here, for it to possibly be true.

The usual application of KVL would have you add every term, because:

When adding all terms, resisting the urge to throw in some subtraction because you already know the polarity, the sign of each value you obtain when solving the resulting equations will represent whether the potential increased or decreased during that particular leg of the journey. If you start putting negatives in your KVL and KCL expressions, you are imposing your own idea of polarities and direction, without letting the numbers speak for themselves.

Also, it doesn't matter which direction you walk around the loop. If you go in the direction of actual current flow, after you solve all the KCL and KVL equations, you will find that every time you traverse a resistor, potential will decrease, because current always flows from high potential to low, and the corresponding voltage term will be negative. If you walk around the loop in the direction opposing real current flow, the opposite will be true.

As far as current is concerned, the same principle applies. Since you probably don't know current directions beforehand, KCL is usually applied by simply adding all the terms, equating that sum to zero, and letting the solved terms' signs tell you about direction.

It all boils down to this: if you avoid explicitly casting some term as negative (a subtraction) when constructing your KCL and KVL equations, then the signs of all the currents and all the voltages that emerge from the solution tell you everything you need to know about voltage polarity or current direction. Together the signs and magnitudes of all the solved terms tell the whole story, without you muddying the waters by throwing in a subtraction somwehere.

It's very important to label all currents and voltages on the schematic with direction and polarity prior to applying KVL and KCL, so you can refer to (and possibly correct) them later. If, for instance, on your diagram you indicated a current flowing to the right, but your solved value for that particular current turns out to be negative, that simply means that current is actually flowing to the left. The solution will be valid and correct without you trying to account for direction in your KCL equation, and even if you got the arrow direction wrong in the first place.

If you wish, after you've solved everything, then for any negative values you find in the solution, you may legitimately reverse the associated arrow (or polarity) on your schematic, and change the sign of its value to positive. This can certainly make the schematic easier for others to read after the analysis.

By the way, I wish to alleviate some of the stress and confusion that the author of that text may have caused you. Maybe he has some reason for labelling things the way he did, but I was truly horrified by some aspects.

For instance \$I_D\$ is clearly pointing the wrong way, since there's no possibilty that current in this circuit could actually be flowing in that direction.

On top of that, \$I_D\$ appears to be forward biasing the diode, and you would be forgiven for thinking that the voltage across it would be 0.7V, as can be seen in the diode's characteristic curve. Even the polarity symbols on the schematic show it this way, leading you to assume that the voltage at the top of the diode (its cathode) must be less than its anode.

If you were to apply KVL and KCL using these assumptions, you would get some contradictory results. I initially started out writing a whole solution, including what to do when this anomally became formally apparent, but it got so complicated that I abandoned trying to show this to you.

I assume he did all this to reflect the context of a reverse-biased zener diode, but I confess it's angered me a little, and I really don't think it's a good approach.

I mean, it's even implying that the output is negative! It's just all mixed up and muddied, to my mind. I dread to think what the section on PNP bipolar transistors looks like.

Not the answer you're looking for? Browse other questions tagged diodes zener kvl or ask your own question.

2
Zener Diode not working as expected
1
Finding output values in a circuit with a zener diode in parallel with a resistor
4
How to select series resistor for a Zener Diode
1
Power of the Zener diode
1
Triangle wave input with Zener and diode
0
Circuit analysis with Z-Diode
0
Determining Vo in a diode circuit using iterative analysis
0
Circuit analysis of series diode clipper circuit
0
Why does this Zener diode circuit not produce the Zener voltage?