I need to apply the voltage in a capacitor to a load (between 2 and 10 Ω) and need to have the most efficient and simple method to do so.

The goal is to apply power to a DUT (device under test), measure the energy applied to the DUT, and

The capacitor is charged to specified voltage, disconnected from the power supply, and then a switch discharges the capacitor through a DUT (Device under Test).

Depending on specific test

The DUT (and a 0.05 Ω shunt) are in series between the capacitor and the drain of the MOSFET (low side switching). The source of the MOSFET is connected to 0 V. See schematic. Schematic is just the general concept - not the complete circuitry.

Mechanical switches aren't an option for the actual discharge switching.

I'm not too late to make small design changes around how the actual switching happens, I'm just paranoid that there is a better way to do this and that my tunnel vision on MOSFETs (specifically the one above) has blinded me from a better way. 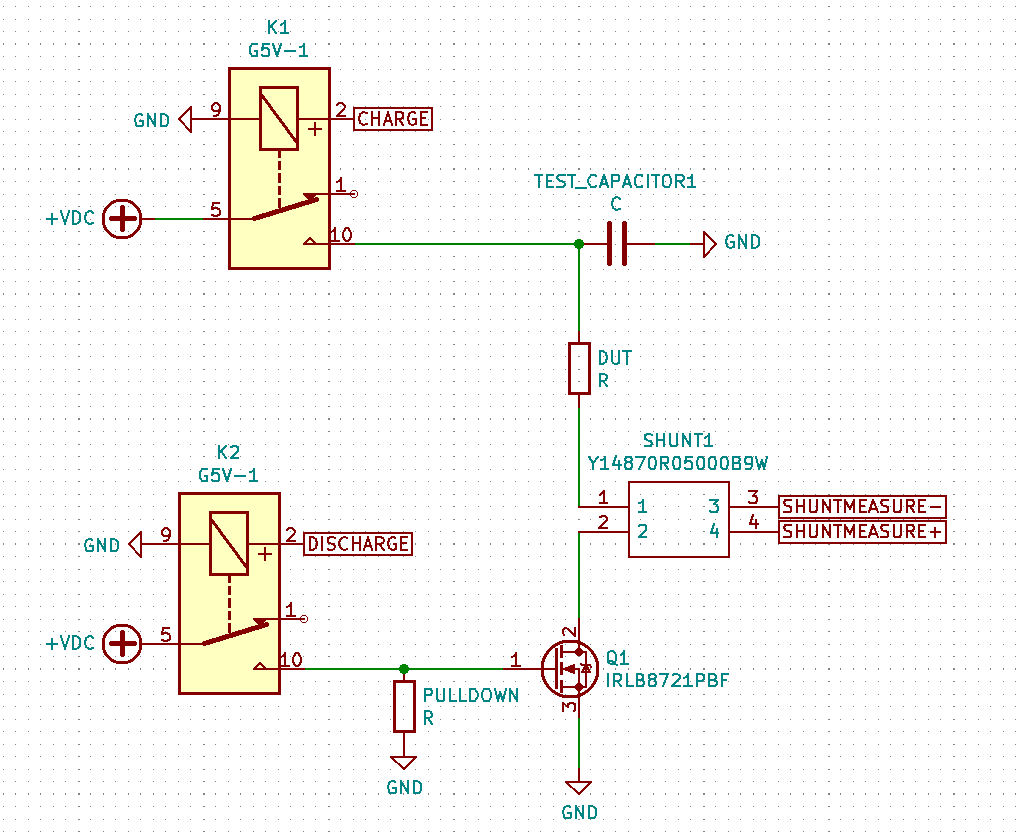 Importantly, it's much lower than the 50mΩ current sense resistor, making the sense resistor the most significant cause of energy loss during discharge (with a caveat described below).

On page 6 of the datasheet is this graph: 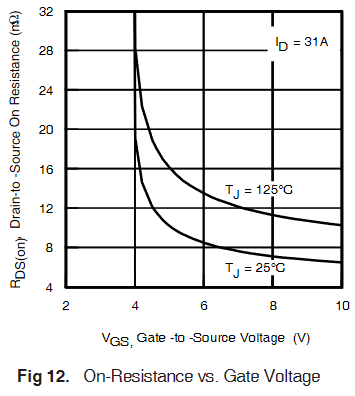 Here you can see that at room temperature, for this device to have an "on" resistance of less than 10mΩ, the required \$V_{GS}\$ is 5V, and it gets worse as temperature rises. To be certain, I would recommend a gate voltage of at least 10V.

So to answer your question "does Vgs need to be at least Vth above Vds", I have two things to say:

It's easy to apply a high voltage at the gate, but you also need to do it fast. The gate takes time to charge, and during that time the drain-to-source channel sits somewhere between high resistance (off) and 10mΩ (on), and is therefore dissipating power. Your goal is to keep the time spent in this middle ground as short as possible, which means charging the gate as quickly as possible.

The greatest impediment you face in this respect is any resistance that exists between the source of voltage that you intend to apply to the gate, and the gate itself. The gate is a capacitor, and together with the source resistance it forms a classic RC system, with an associated time constant R × C.

The datasheet tells us that the gate capacitance is around 1nF. So if your gate potential is derived from a source with 1kΩ of resistance, the time constant is:

This is the amount of time it takes to charge to only 63% of the target source's voltage. Whatever your target voltage at the gate, if the source of that potential has a resistance of 1kΩ (such as the output of a typical opamp), you can expect that for 1µs the MOSFET will be a significant contributor to energy loss.

I'll leave you to decide how acceptable that is. The moral is that you may need to be very careful about how you "drive" the gate.

With the shunt and the MOSFET there, totalling 60mΩ, and a DUT of 2Ω, the fraction of power delivered to the DUT (efficiency) will be (best case):

This doesn't even account wiring resistance or capacitor ESR, which could be an additional few tens of milliohms. You won't be able to achieve better with this design, but you can factor this loss into your calculations.

I think also that the extremely fast rise of current through the DUT will induce ringing, and will be easily coupled (both capacitively and inductively) into the gate drive circuitry, which could really mess things up. I advise that you keep that high-current loop well shielded (by using short, shielded cables) and keep loop area as small as as you can (don't use any long and/or widely separated traces/wires to close the loop).

Instead of a single large capacitor C, consider adding some smaller ceramics in parallel with it, say 1uF, 100nF and 10nF. This will improve its ability to respond to the sudden application of a heavy load, and may mitigate the ESR of C, another source of inefficiency. In fact, you can greatly improve the ESR of the capacitor by instead using multiple smaller capacitances in parallel.

Also, decouple your control circuitry with 100nF and 10nF capacitors - that sudden current spike will likely find its way to their otherwise clean voltage supply.

To initially charge the capacitor, you seem to be connecting it directly across the power supply. This is going to be a huge load on the supply, and a big cause for concern for anything else using it.

I recommend limiting charging current with a small resistor, say 10Ω, to keep it down to something more reasonable than "all-the-amps", and to prolong the life of the capacitor.

The purpose I gather is to measure the charge discharge energy efficient in a low ESR capacitor with a fixed resistor. Then compare at different V and load R values to see how it changes.

You might want to consider a constant charge CC circuit and constant discharge CC circuit so you get similar curves as in battery tests. Whatever load current you choose , select a FET with RdsOn < 1 % of your smallest load resistor using a a transistor or a switch with a cap across it to prevent bounce voltage on the gate.

Not the answer you're looking for? Browse other questions tagged mosfet switching discharge test test-equipment or ask your own question.

4
N-Channel MOSFET and Voltage Drop
1
Mosfet life expectancy?
1
Drain to Source Current Waveform on Mosfet is Slow
0
Help Using a MOSFET
1
How to efficiently mux many signals to/from a climate chamber?
2
ID Change with Vgs for MOSFETS
0
Vds meaning in characteristic curve of a MOSFET
1
Miller Plateau - MOSFET turn ON