Where has this current gone in my current-voltage converter?

Everybody knows what a "current to voltage" converter is, a basic application configuration for op amps.

This is a very level basic question. See the picture. What is wrong? Have I missed something?

Just to emphasize the importance of ("hidden" or not) wiring ...

This shows where all the current flows and how the 10uA finds it's way back to your ground connection:

If you put in a negative voltage (V4 < 0) so that the current flows the other way, then the output goes positive to drive the current back through the feedback resistor, and this current is sourced from the positive supply (V6) and is returned to your voltage source via it's ground connection.

Figure 1. I1 doesn't go into the inverting input due to its high impedance. It goes through the feedback resistor, R1. 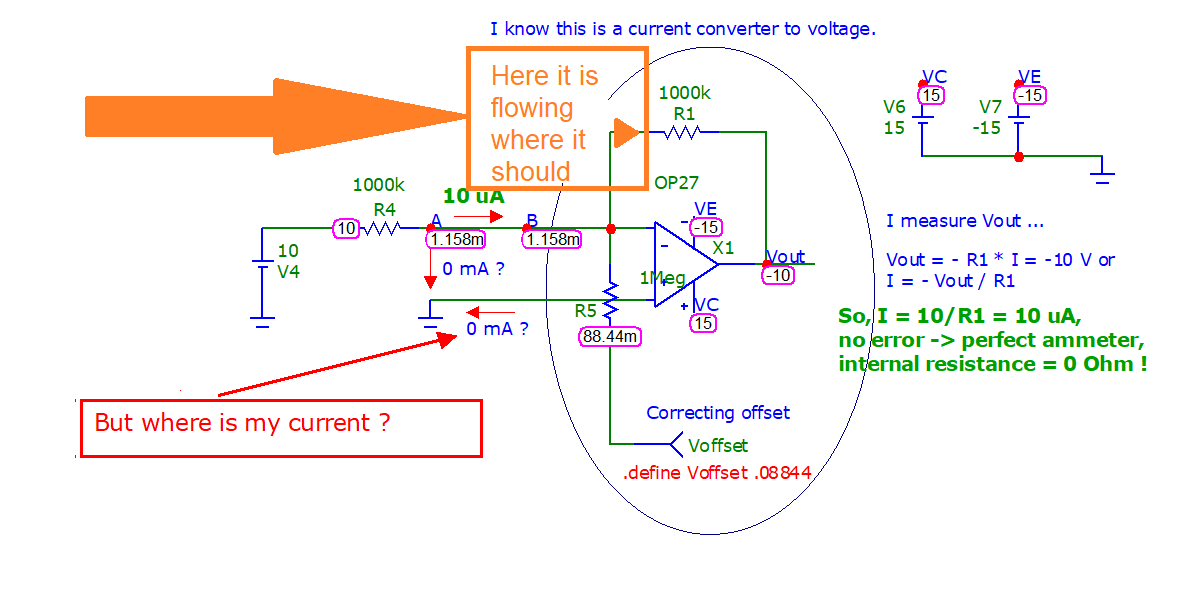 That's basically how a transimpedance amplifier works; the output keeps the inverting node at the same voltage as the non-inverting node. The output takes that current (or drives that current if you prefer). The input impedance of the OP27 is a gazillion ohms. However, the OP27 does have input bias currents of circa 100 nA and these might pose a significant error if it's important.

I have redraw a little my schematic to show where this current is "gone".

It is a great part of the answer, but it lacks "something".

Remember that we are in "simulation" and that some currents sources are hidden in the model of op amp we use.

So the answer is not "complete". I think the true answer is in the "laboratory" where we can measure really everything (not always simple). 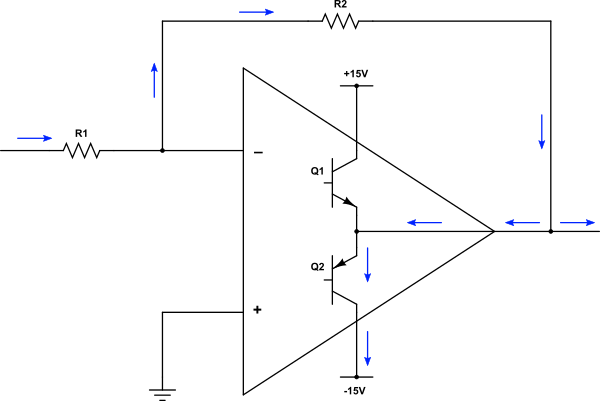 Q1 and Q2 represent the push-pull output stage of the opamp. Note that current will branch at the output of the opamp, some to be sunk by the opamp itself via Q2, and some will be sunk by whatever load you connect to the output.

If the input current is negative (in the opposite direction) it will follow this path instead: 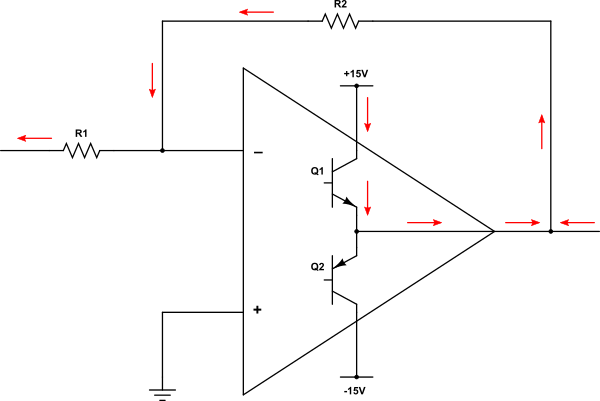 This time the opamp (and whatever load you have connected) will be sourcing current for the input to sink.

I read these answers full of technical details and wonder how it is possible not to reveal the simple but brilliant idea behind this op-amp circuit consisting only of a resistor and op-amp? I realized it 30 years ago (Fig. 1) and with its help I was able to understand and explain many other op-amp circuits. 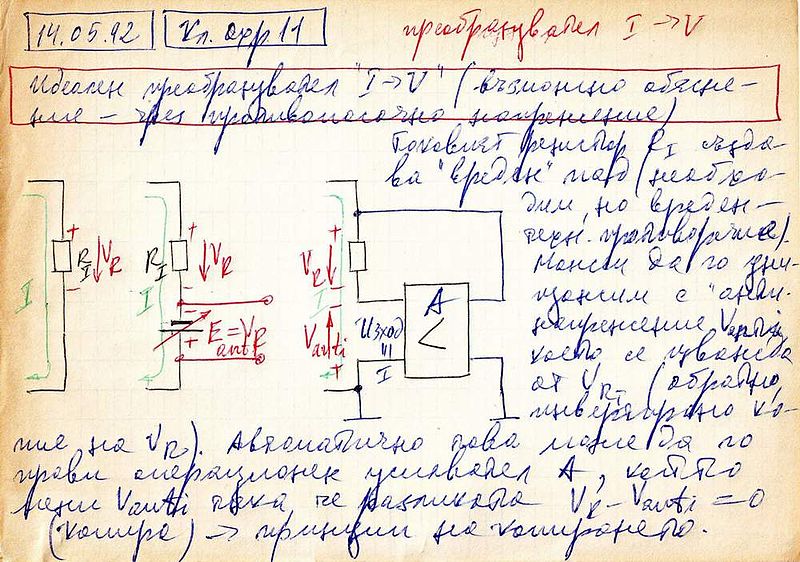 Fig. 1. A conceptual picture of an active current-to-voltage converter from my archive (1992). Here is the translated text:

May 14, 1992. "Ideal" current-to-voltage converter (a possible explanation by an opposite voltage). The current-sensing resistor RI creates a "harmful" voltage drop VR (it is necessary but undesired; there is a contradiction). We can destroy it by an "anti voltage" V(E)anti that is subtracted from VR (it is an inverse copy of VR). It can be implemented by an op-amp A that adjusts Vanti so that VR - Vanti = 0 ("active copy" principle).

The idea is obvious: To measure the current I by a voltmeter, we break the circuit, insert a resistor RI and measure the voltage drop across it (VR = I.RI). But this voltage introduces an error since it is subtracted from the input "current-creating" voltage VIN and the current decreases. So we decide to destroy it by adding an equivalent voltage V = VR. For this purpose, we break again the circuit and insert a varying voltage source producing the compensating voltage V. This voltage is added to the input voltage and the error is eliminated - Fig. 2. 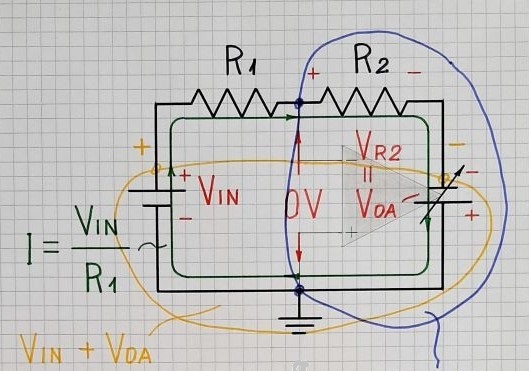 Fig. 2. Full conceptual circuit of four elements in a loop (the picture is taken from a similar story about the inverting amplifier). Note the two voltages are summed in a series manner.

So the (properly supplied) op-amp output acts as a small variable "battery" connected in series to the resistor (Fig. 3) that adds the compensating voltage VOUT = I.R in the circuit. And, of course, the input current will flow through this "battery". 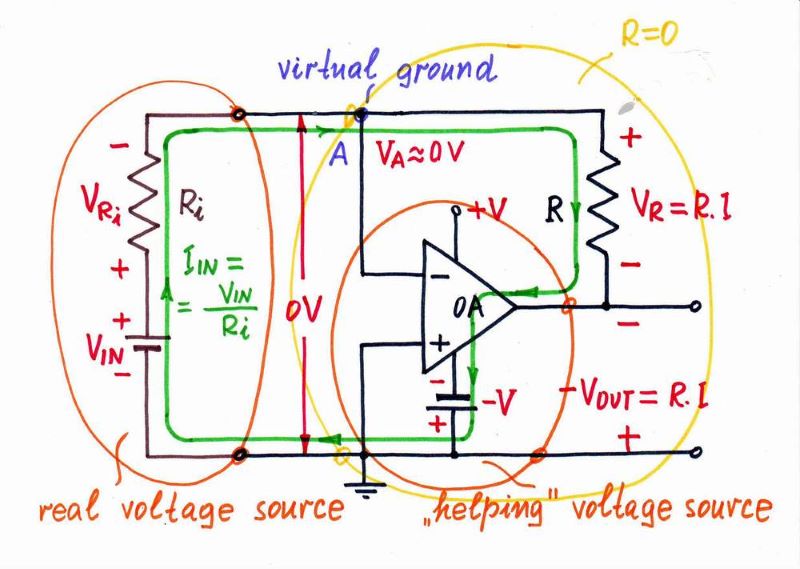 Fig. 3. Op-amp implementation of the idea

How does the op-amp do it?

It is interesting to see how the op-amp copies the voltage drop VR at its output. According to KVL, we can see in Fig. 2 and Fig. 3 a loop of three voltages - VR, VOUT and VA. The op-amp changes VOUT so that to keep VA zero (negative feedback). As a result, VOUT = VR.

Another clever trick is that we use the compensating voltage as a buffered, grounded and inverted output voltage (the last feature is a "gift" that is not always desired).

To illustrate the circuit operation in a more attractive way, we can "geometrically" draw the circuit diagram - Fig. 4. 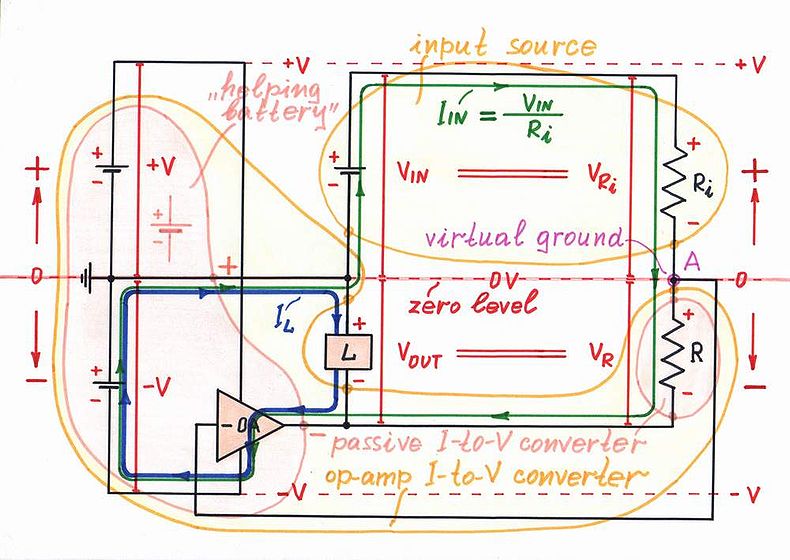 Fig. 4. A "geometrical" representation of the op-amp current-to-voltage converter

Note something very important - the input current (in green) does not flow through the load. The load current (in blue) is provided only by the negative supply source, i.e., the load does not consume current from the input voltage source. This is a big advantage of the active op-amp circuit compared with the passive one (resistor).

If we are curious enough, we can see a similarity between the resistor R and the op-amp output - there is the same voltage I.R across them; so both behave as resistors. But while the resistor subtracts its voltage drop from the input voltage, the op-amp adds its output voltage to it.

So the op-amp output acts as a negative "resistor" with resistance -R that neutralizes the positive resistance R. The whole circuit (resistor and op-amp) behaves as a "piece of wire"... and the input current flows through this "artificial wire" - Fig. 5. 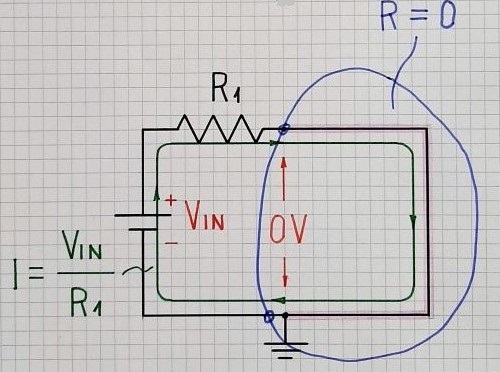 Fig. 5. The transimpedance amplifier presented as a "piece of wire"

As a rule, we know the passive is bad and the active is good. But here the passive "circuit" (resistor) has a very significant advantage over the active - it allows to measure currents of large magnitude.

The problem with the active op-amp current-to-voltage converter is that the current passes through its output stage... and the latter must withstand it. That is why the ammeters inside multimeters are not made with the op-amp circuit, no matter how perfect it is, but with the simple passive circuit (a humble resistor between the inputs).

The opamp has lotsa gain, and the action of negative feedback drives the inverting input to behave as a virtual ground. This changes the analysis of the circuit. the two resistors do form a voltage divider, but having a point in the middle of the divider that does not move breaks that current into two related but not in the same way currents. The output does whatever it takes to make the two input voltages equal, so whenever the loop is closed, the two currents are equal. But they are not in the same direction.

Note, all of this assumes a theoretically perfect opamp with zero input bias current and zero input offset voltage.

Not the answer you're looking for? Browse other questions tagged operational-amplifier current-measurement input-offset-voltage or ask your own question.

8
Do you have to use an instrumentation amplifier to measure voltage across a 0.01 ohm shunt?

19
Is there an implicit "unit of time" involved in electricity measurement? (e.g. miles per hour, kb per second, amps per ???)
1
CCVS (current controlled voltage source) in practice
4
can I use any OP AMP as buffer
0
Voltage regulator Current regulation
10
Amplifying High Voltage nA Current
1
What are the limits & capabilities of Op Amps with AC signals?
0
Non-inverting current to voltage converter