How to use two power sources in a DC circuit

Shortly after starting to work with basic circuits (not too long ago), I was convinced that all electricity within a dc circuit had to originate and return to the same power source (with the exception of optocouplers). I now think that's not true thanks to the following:

First and foremost, what is the correct jargon for what I am trying to accomplish? Web searching could be a lot more fruitful if I knew. (While writing this up, I noticed the use of "back-powering" in the datasheet; I will begin searching this)

I have used the diode in my circuit and have had mixed results.

I want to avoid asking too broad of a question, but I'm in a pickle because I don't know what I don't know. Are there a set of DON'Ts/ best-practices that apply when using two power sources? My power MOSFETs where essentially just converting 3v3 logic to 5V logic for a self-powered BLDC driver board (another example where two power sources are operating in the same board) that presumably doesn't draw more current than what the Pico's pins can provide (50mV/pin, I believe). If I were instead driving a motor itself (so as to continue using the same MOSFET circuit, let's say single-phase), it's not clear to me that my circuit wouldn't again overwhelm the Pico's linear regulator.

I'm looking into the concept of impedance within dc circuits because I've heard it (high impedance) used when describing oscilloscope/multimeter. I have a suspicion this may be the answer to protecting my Pico (make it high impedance; not quite sure how one does that. MOSFET, since its gate is "high impedance"?). Am I on the right path?

2021/09/09 10A PST : In the past (on stack overflow), I've been pretty quick to resolve questions. I would like to think it's because I asked tightly scoped questions and not because I'm inpatient ; ) . However, in this case, I'm going to take a day or two to shore up some knowledge of what's happening between the pins of two independently powered MCUs. I think that encapsulates some of what I'm struggling with. I'll also take the time to compose some schematics to clarify any discussions. Special thanks to Jay for putting up with my obtuseness.

2021/09/09 5P PST: Hoping to clarify what it is I am searching for. Thinking about Jay's 2nd bullet point regarding our circular perception of a circuit and re-read some Wikipedia entries on transistors. Particularly helpful was this line from the Field-effect transistor entry, "Field-effect transistors have high gate-to-drain current resistance, on the order of 100 MΩ or more, providing a high degree of isolation between control and flow." This isolation is where I'm stumbling. To be as isolated as optocouplers, my circular perception demands four pins, not three. I decided to try this on my bench with a couple of iterations of a toy circuit. 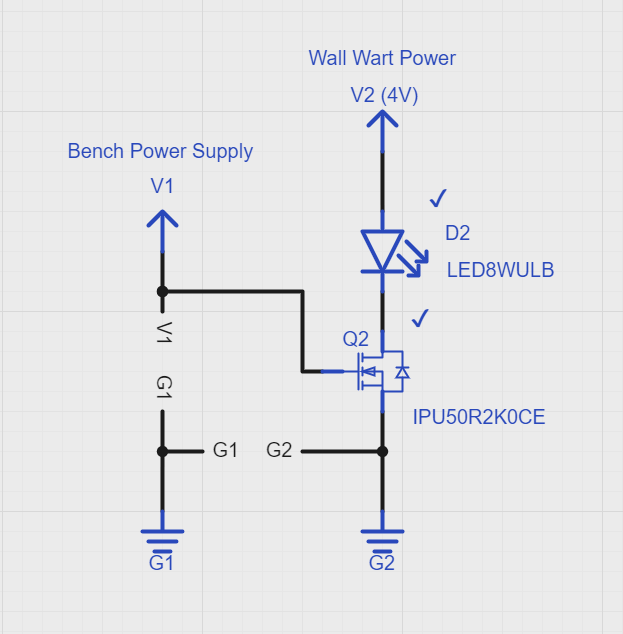 Iteration 1: No resistors. According to my circular perception, this shouldn't work since electricity won't flow from V1 into the gate without a return path. To my surprise, after the circuit is assembled but w/o power, providing power to V2 but not V1 (e.g. power supply off) the led would flicker unpredictably. I had read that MOSFETs gates can hold a slight charge and that MOSFETs can also have very slight leakage so I chalked this up to operating the MOSFET in an undefined/unpredictable parameter space and moved on. 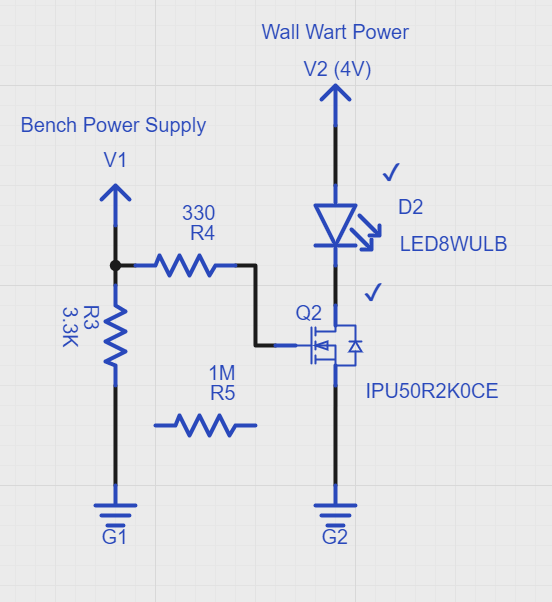 Iteration 2: Try to add resistors between gate and V1 kind of blindly following schematics such as the one here ( Question about mosfet gate resistor) . It more or less produced the same result, unpredictable flickering. 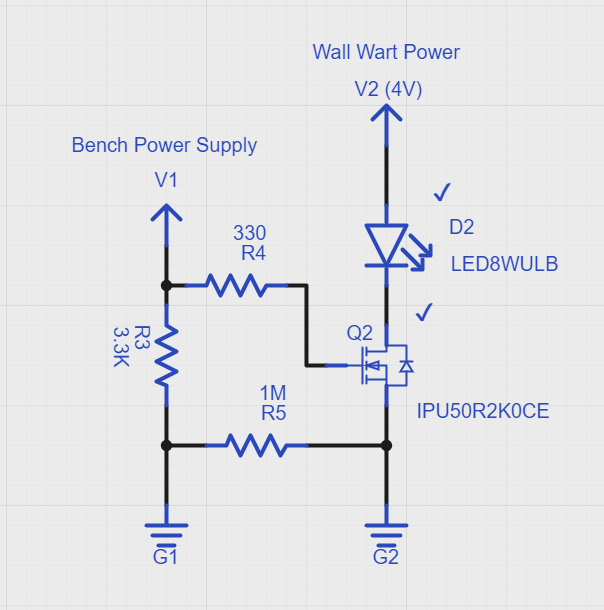 Iteration 3: Reasoning that I still wasn't closing the circle for the electricity flowing into the gate, I added a very high resistor between source and GND2 (The first/FINAL schematic). This works exactly as I wanted it to. With bench supply at 1A. At 0V, LED is off. At 3V, LED is on. At 4V+ LED flickers. I'm looking into this and whether it's a result of Vg > Vd (For example, learning about source-follower configuration and whether it applies for my transistor; It's not essential that I understand the ins and outs of this at this moment).

This toy example provides the necessary tool for me to join low voltage low current logic circuits to high voltage high current flow/load circuits. Unfortunately, I'm still at a loss as to why it works and under what parameters. Just beyond the source pin, it would seem that I am encountering electricity from both circuits. How do I dictate what electricity returns to GND1 via R5 and what electricity returns to GND2? Currently it doesn't seem to matter because I'm using low voltage low current on both sides. However, I need my understanding to increase so that in the high voltage high current flow/load circuit case, I don't overwhelm the GND1 return path or the resistor R5.

Many thanks for bearing with me.

The oscilloscope PCB doesn't appear to have anything that resembles an optocoupler.

Most don't so you have to be careful that you don't connect the ground clips to anything that is at a voltage other than ground. Otherwise you will create a short-circuit, a high current might flow and damage result.

Digital multimeters are fully isolated and have no reference to Earth. You can connect the two voltage probes to any points in a circuit.

... OR-ing a second power source with a Schottky diode.

This is fairly common.

Figure 1. OR connected power supplies. Whichever supply has the higher voltage will power the lamp.

Usually "back-powering" or backfeeding would describe where, for example, V2 > V1 and tries to push current into V1. The diodes prevent this. (Current will only flow in the direction of the diode arrow.)

Are there a set of DON'Ts/ best-practices that apply when using two power sources?

In general, connect the grounds of the two supplies together so that voltages all reference the same common ground.

I have a suspicion this [impedance] may be the answer to protecting my Pico (make it high impedance; not quite sure how one does that. MOSFET, since its gate is "high impedance"?). Am I on the right path?

Ask another specific question on this topic and include a schematic.

Really confused myself over this one. Answering my own question. Still not sure about the direction of the flow in my dummy circuit but I've concluded that it shouldn't matter because I should never try to use this outside of experimentation like this. The unknown concept that I feared (and that fried my pico) is that of "Ground Loop" (pp 7 & 8 from presentation below were helpful).

The answer is, use isolation ICs. I knew of photo couplers, but my concern was twofold.

I've since discovered that there are a whole family of ICs built just for this purpose, including isolated ADCs, with varying current, speeds, etc. depending on need. TI documentation was particularly helpful.

Not the answer you're looking for? Browse other questions tagged microcontroller power-supply impedance or ask your own question.

2
Switching 120V AC with Digital Logic on Isolated Power Supply
2
Power switch between two sources using mosfets
1
What is difference between Power-GND vs Pre-GND?
1
Use indepenent power sources for Arduino and for breadboard
1
How to power from among several sources and monitor which sources are active?
0
Should an unused VCC pin with a higher voltage be left unconnected?
0
RS485 isolated circuit - forgot connections. Will this work?
0
Joining the output of 2 different power regulators