Okay here I go. I just started learning nodal analysis technique but I feel its difficult in solving the circuits consisting of dependent current and voltage sources.

Im unable to solve this circuit. 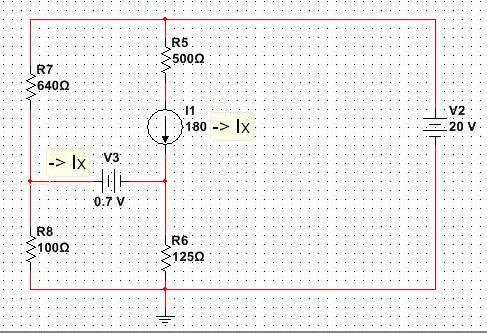 Generally to solve this type of circuits we find a relation to express Ix in terms of node voltages / resistance. example Ix = (V2 - V1 ) / 500 ohms . But here there is no resistance in the 0.7 v branch voltage. I am unable to find a solution to solve it. Could anyone kindly explain me the solution to this circuit.

NOTE I have found a solution by finding the thevinin's resistance across 0.7 v battery and replaced it with Rth in series with 0.7v and I have got the solution but I want to know, Can we get it using only KCL equations (nodal analysis) ?

Please help me in solving this circuit and kindly explain it with the KCL equations. Your help is greatly appreciated. Thank you

Of course, 10 equations is a bit too much to solve by hand (I generally use Gauss-Jordan elimination to do this part), but as far as I've seen, this method works in situations where the usual 'text-book' approach using nodal and mesh analyses fail. Furthermore, we don't have to deal with the painful Thevenin equivalent/Super-mesh workarounds here...

On the downside, I'm not quite sure if this approach works with every possible circuit (so far I haven't seen any where it fails), so any negative feedback on this part is welcome :)

The problem with solving this circuit by nodal analysis is not the CCCS, it's the voltage source V3. In nodal analsyis, voltage sources can't be directly accomodated but have to be accounted for bye creating "supernodes". In this case you'd combine the nodes at the left and right of V3 to make a supernode.

But of course that means that Ix is no longer a variable in the analysis.

Luckily, the basics of nodal analysis give a clue how to solve this. We just need to apply KCL at one of the nodes connected to V3.

For example, if we define the currents through R7 and R8 as I7 and I8, both defined in the "top-to-bottom" direction as the circuit is drawn, then we can easily find

Since I7 and I8 can be written in terms of the node voltages, we can now continue with the nodal analysis.

In nodal analysis the unknowns to be solved for are the node voltages. In your circuit you have 4 nodes. The reference node is clearly known. The 20V voltage source reduces the unknowns by 1. The 0.7V source further reduces the number of unknowns:

In MNA, you would write KCL at each node (except ground) and consider the currents in the voltage sources as additional unknowns. To compensate the increase in unknowns you would add equations similar to (1).

Not the answer you're looking for? Browse other questions tagged analysis circuit-analysis or ask your own question.