I have just gotten a URM37 ultrasonic sensor. 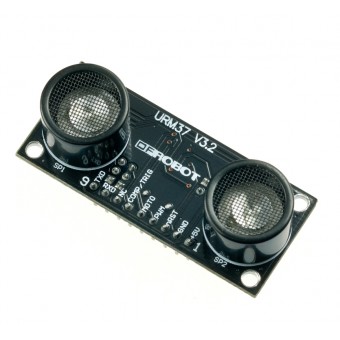 I need a way to measure the distance to an object from two sensors (for maneuvering). Can I know if ultrasonic sensors with 2 sensors are suppose to be able to measure dual distances?

Or do I have to get one more sensor?

Also, If i do get one more sensor, does that sensors pulse affect the other ultrasonic sensor?

The URM37 appears to be a typical "ping" module and does not have two sensors, rather it has a transmitter and a receiver.

You could build a system with one transmitter and two receivers if you got into the details of amplifying and detecting the signal yourself, rather than relying on the module to do it.

You might be able to slave additional modules to the primary one by removing their transmitting transducers and firing them all at once, though the circuit might misbehave without some loading.

The easiest solution would be to use multiple modules and take turns firing them so that they don't confuse each other. Just take the normal measurement interval and double it so that you are taking a measurement at that rate, but each sensor is firing half as frequently.

Not the answer you're looking for? Browse other questions tagged arduino sensor ultrasound or ask your own question.