Preventing op-amp outputs from affecting one another

I built this op-amp circuit that takes in 4 inputs and outputs 3 sums by using op-amp adder and difference circuits to achieve a gain of 2x. In a simplified circuit, I boiled it down to the bare op-amps being used for the circuit in this image in an effort to show what I'm trying to achieve.

When I ran this circuit in LTspice, sending small inputs results in expected outputs. For instance, I sent in a 100-mV peak-to-peak sine wave (500 Hz) in at input A (while setting other inputs to ground), and I get a 200-mV peak-to-peak sine wave at the outputs. Furthermore, the output signals don't seem to affect the previous op-amps in the chain. (i.e., when putting a signal into A, the resulting output from OA6 does not affect OA5).

However, when I tested my circuit in real-life on a PCB, the results are strange, specifically when it comes to inputting a signal into C and D. When I input a 100-mV sine wave signal into A and B (again, 500 Hz), I get the expected 2x sine wave outputs. However, when I put in the same signal into C, I get a 3x gain instead of a 2x gain at output 2 from OA7. Furthermore, when analyzing the circuit when inputting the signal into D, somehow OA4 outputs a tiny 50-mV sine wave even though A and B are grounded. I think that somehow, part of my output signal is being fed back to the op-amp unintentionally which causes excess gain and strange signal outputs. What can I do to isolate each op-amp circuit so that they don't affect one another? 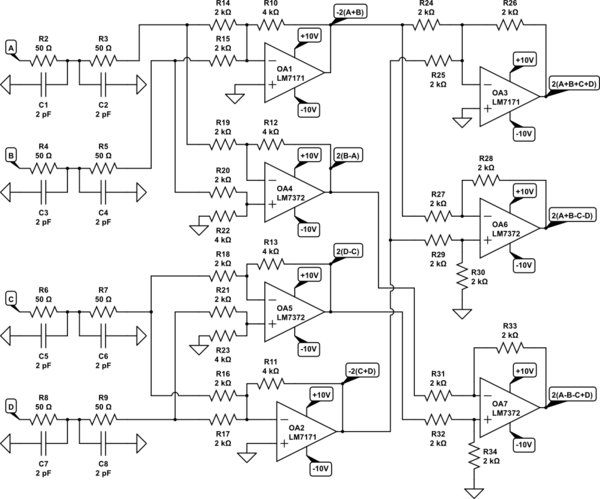 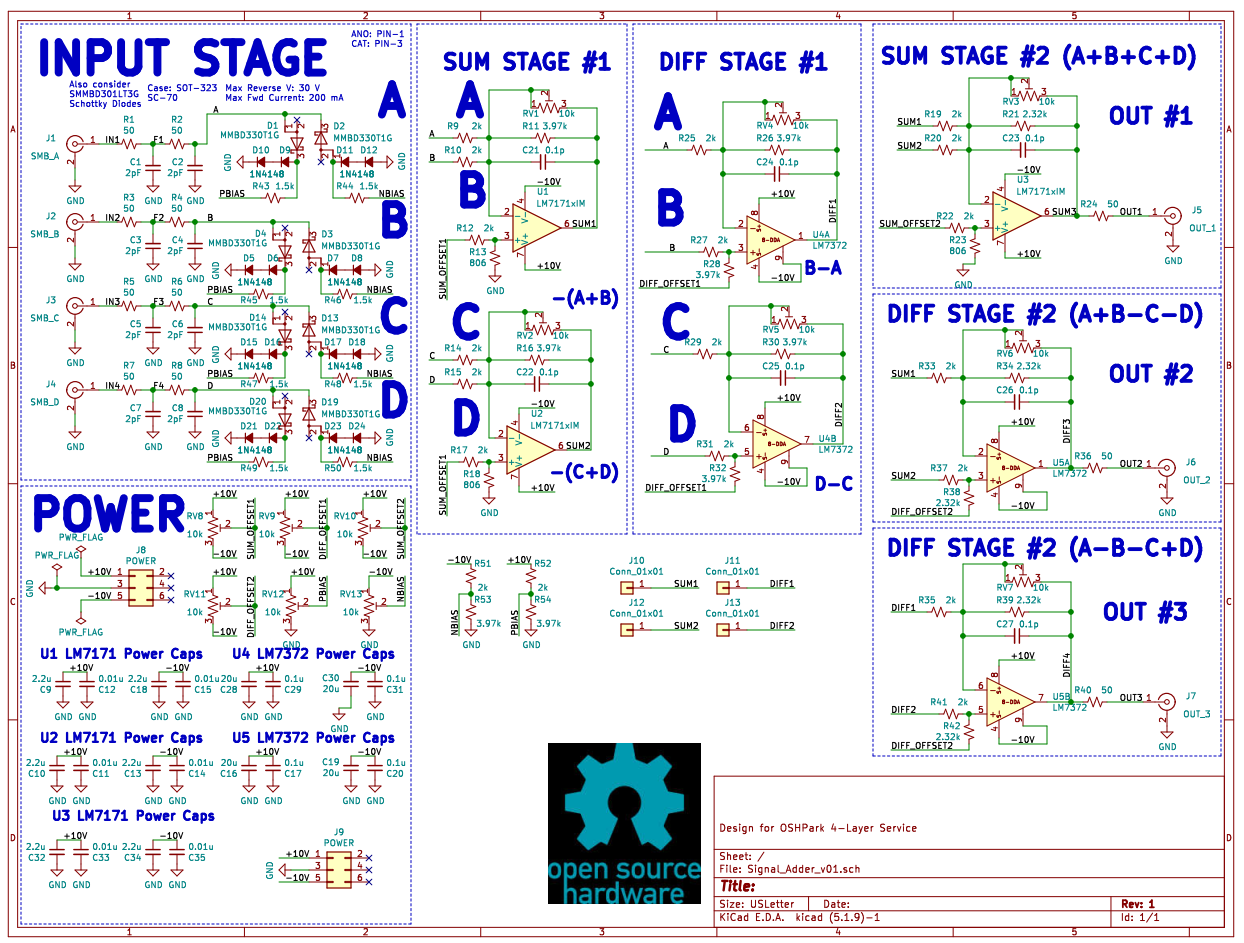 EDIT: I posted my rough, simplified schematic in circuitlab and showcased my entire schematic from my CAD software. To be clear, my op-amps have a potentiometer in parallel with the feedback resistor, but on the board, I only have one. I just made room for the potentiometer for troubleshooting purposes here; in case the gain was an issue, I could remove the fixed resistor, put in the pot, and adjust the gain to my liking. Regarding the offsets, I'm using a potentiometer to control them, but from what I saw, they don't seem to be a big issue. The voltage at the offsets should be very close to ground in the single-millivolt range or less.

EDIT 2: So, upon observation, I think that the issue stems with the difference amplifiers. Somehow, when I inject my test signal into D, OA4 outputs a small sine wave, even though A and B are shorted to ground. Perhaps this is what is causing all my problems, as all the problems seem to stem from the difference amplifiers. Why does this phenomenon occur and what can I do to prevent this 'feedback'?

EDIT 3: As requested, below is a picture of my 4-layer board. While it doesn't show a ground plane, rest assured that there is a ground plane present. It's just not filled in order to show the traces. I tried my best to add some silkscreen so that you can see the traces and follow along as best as possible. The left side has the inputs while the outputs are on the right side. Each input goes through the appropriate low-pass filter circuit as well as a diode clamp. From there, you can see how the traces are routed to each op-amp as per their scheme. The silkscreen makes each component identifiable, but it may be hard to read given the trace overlaps. 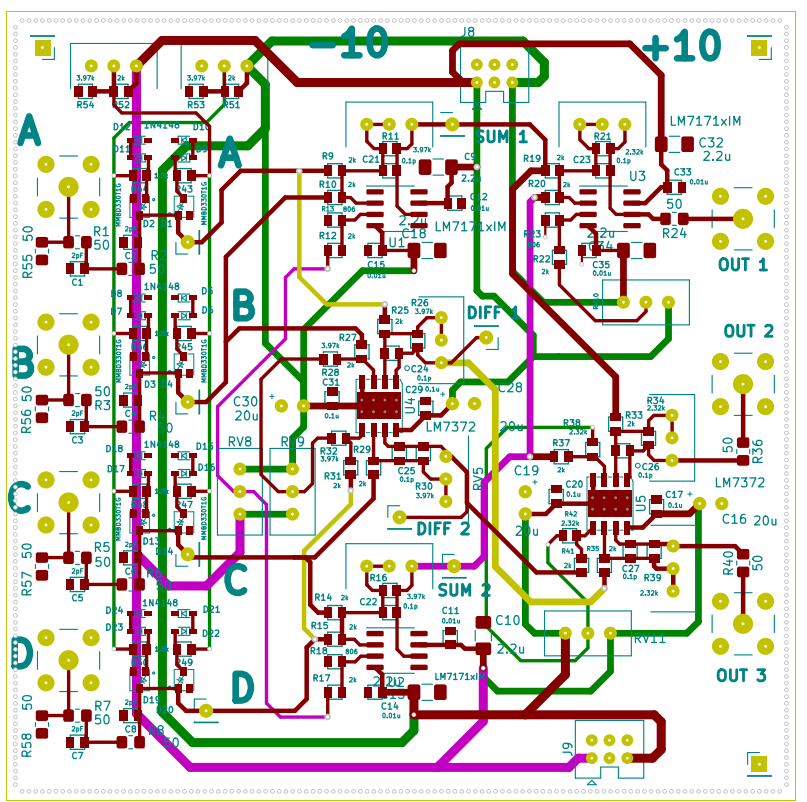 There is a path through R28 and R32 to give crosscoupling between Diff1 and Diff2 that is giving the small signal in OA4. The two opamps share the same offset adjustment.

Any signal coming in the D input goes through R31, the R32 to the offset adjustment. Because that acts like a 2.5k resistor to ground there is about a 4:1 attenuation to this point. (expect about 25mV for 100mV into D).

From there the unwanted signal goes through R28 and R27 experiencing another 3:1 attenuation bringing the signal to about 8mV into the non-inverting input of U4A.

U4A has a gain of about 2 or 3 depending upon the setting of RV4. This should result in an unwanted signal of about 20mV at the output of U4A. This is less than the 50mV you say you have measured, it is not obvious why it would be that much.

You can test it by disabling the DIFF_OFFSET1 signal and putting it to the ground.

The output of the offset adjustment pot does not have zero impedance - since it is a 10k pot it will act like a 2.5k resistor to ground when set to the center position. I'm surprised you think the offset adjustment is necessary. These days you can get amplifiers with just microvolts of inherent offset.

Also, adjusting the gain of a differential stage by only varying one side (RV4,5,6,7) will compromise the accuracy of the differencing.

Not the answer you're looking for? Browse other questions tagged operational-amplifier feedback inverting-amplifier negative-feedback non-inverting or ask your own question.

5
Trouble chaining multiple low noise op amps
4
Op-amp circuit has lower gain at low frequencies
2
How to null offset on op amp without affecting gain?
10
Another Failed Differential Amplifier
0
Funtional role of op amps in a ADC filter circuit
1
Amplifier power problems, power supply limitations, or end stage base current draw
2
Can I rely on a the simulation of an op-amp based differential amplifier without looking at my op-amps common mode signal
3
Help figuring out an op amp circuit with two loudspeaker outputs
0
Unable to stabilize waveforms on oscilloscope