I am working on a project that uses a transformer in flyback mode to create plasma arcing. It's based on a simple circuit that's available in a lot of DIY kits which uses a MOSFET to switch voltage on and off across a transformer: 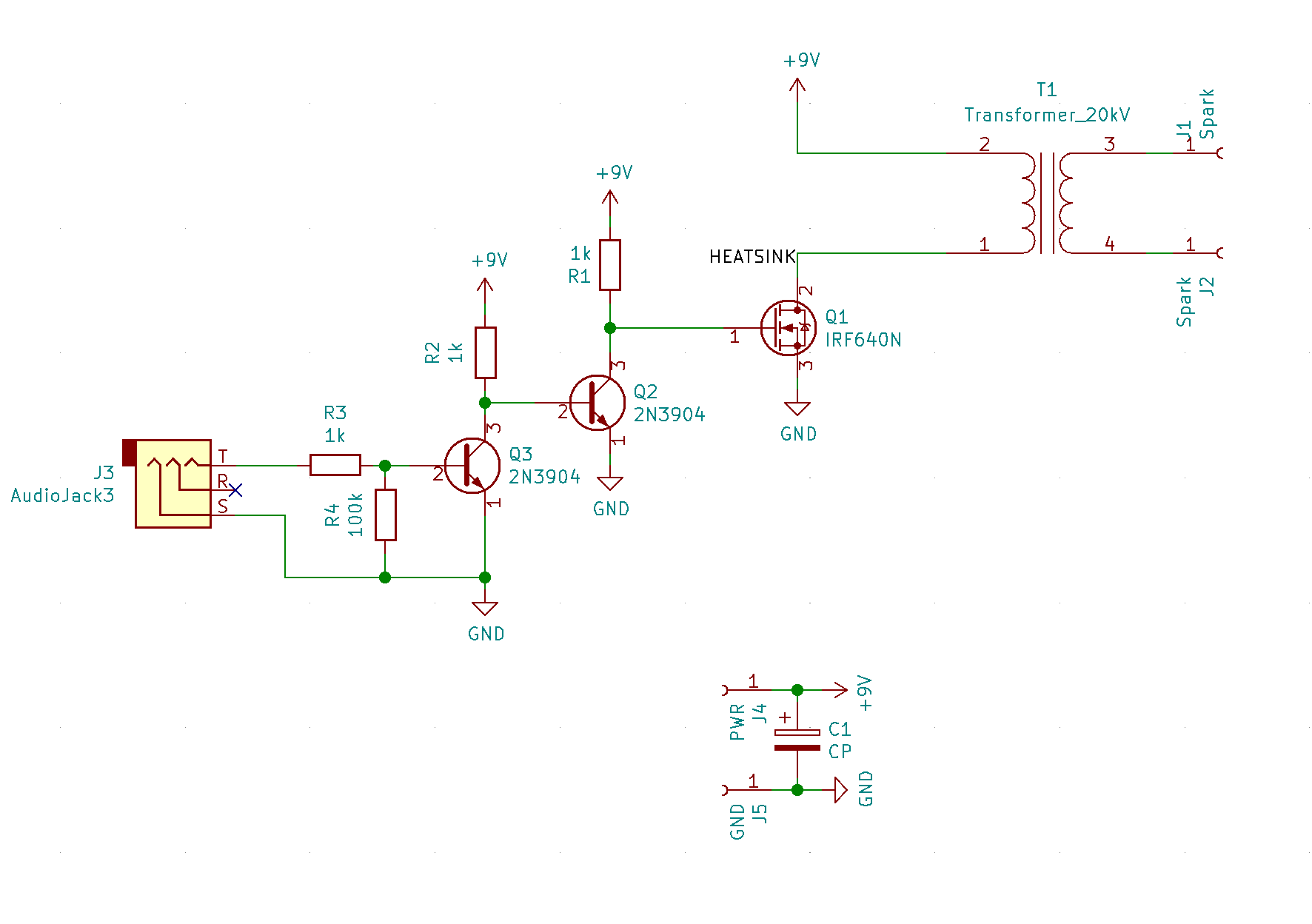 Main thing here is Q1, which is being used to switch the transformer on and off at a given frequency, creating a variable frequency plasma arc. The rest is just some level shifting. The transformer I'm using has very low resistance across the primary, something like 2-4 ohms, so the main factor here is selecting a MOSFET that can handle a lot of current.

The DIY kit I based this design off of uses an IRF640 MOSFET, but this part is not available from my SMD manufacturer. From their parts library I selected the following transistor, which had the highest power dissipation rating and the lowest drain source resistance: https://datasheet.lcsc.com/lcsc/1809192013_Infineon-Technologies-IRFS4115TRLPBF_C53417.pdf

Is this the right way of thinking about selection for this component, or are there other factors involved that I should be considering?

Your schematic is possibly faulty and you should concentrate on managing the flyback voltage before tackling the actual MOSFET: -

But, it's even worse if you look at the data sheet graphs: - 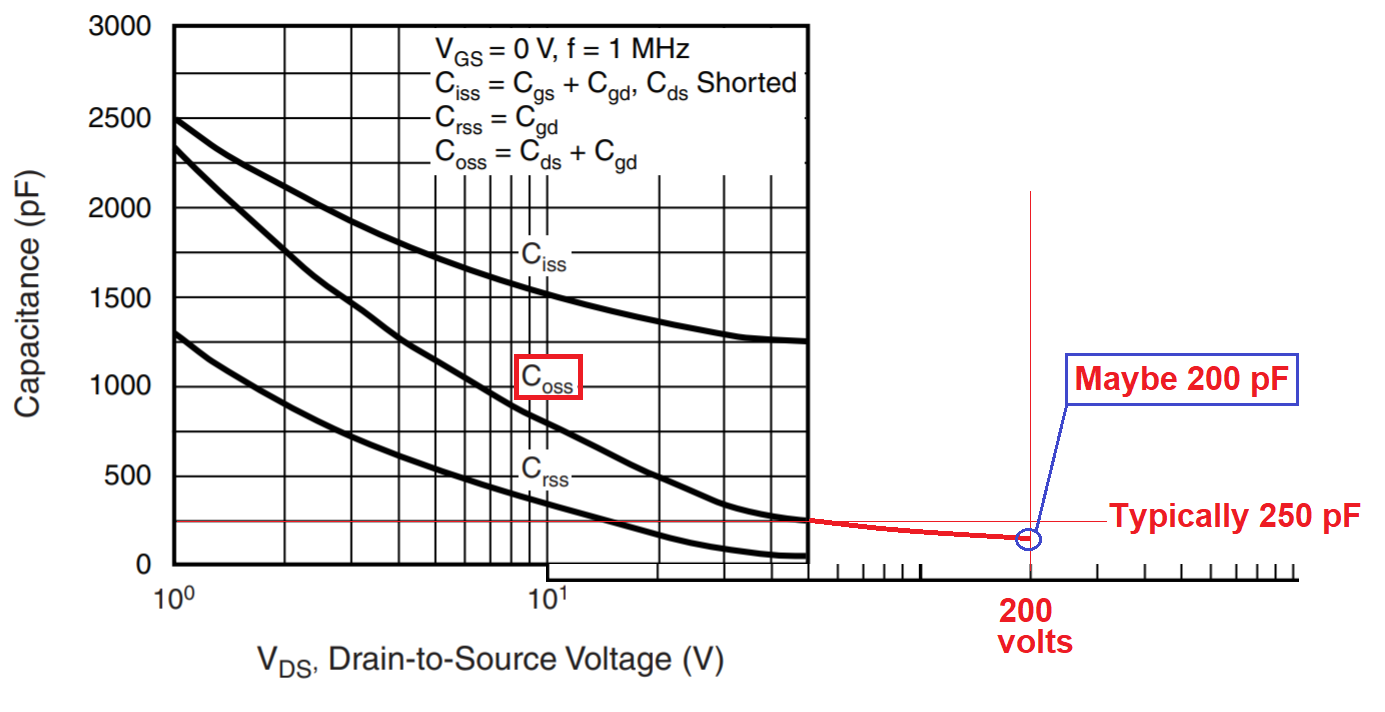 By the time the drain voltage has risen to around 200 volts, the drain-source capacitance may be typically 200 pF and quite possibly as low as 150 pF. Now, with 150 pF, the peak voltage could be as high as 300 volts and who is to say it might not be 500 volts with a little more leakage inductance or, even a thousand volts. These circuits are notoriously prone to damage and it is the flyback voltage that causes the vast majority of failures and magic smoke.

The design, as it stands is flimsy and you should fix it first before moving on with the MOSFET choice but, it's probably a good idea to check out the output capacitance of a few to see what sort of ball-park capacitance they have. The proposed replacement MOSFET is stated as having an output capacitance of typically 490 pF so, it's going to be in the same ball-park as the IRF640 i.e. problematic but even more so because it's only rated at 150 volts.

Nobody should advise you on the MOSFET choice until you have reasonably demonstrated that you have the flyback voltage properly under control.

A MOSFET transistor should not be dissipating a lot of heat if it works as a switch, has a very low ON resistance (RDS(on)), AND is much faster than the signal that drives it.

In this case, the original transistor had about 0.18 ohms or 180 milli-ohms ON resistance, while the primary has at least 2 ohms, meaning if you ran plain DC current through it, it would be dissipating about 11 times less heat than the transformer primary.

At 9V and 2.2 ohms (total with MOSFET), that would be about 4.1A current, 36.9 watts total, 33.6 W on the primary and about 3W dissipation on the transistor. This would be your worst case scenario, and you would need a large heatsink for the MOSFET. Nearly all MOSFETs in a TO-220 case are capable of dissipating at least 40-50W, provided they have a sufficient heatsink.

The MOSFET you have selected as a replacement has about 10 times lower ON resistance, meaning 10 times lower dissipation/loss than the original, or about 300mW (milli-watts) in which case you don't even need a heatsink.

The above-calculated levels of dissipation would happen only if the MOSFET remained ON all the time, or was shorted. The actual current and dissipated power would be much lower, and would depend on the switching frequency, the duty cycle and the INDUCTANCE of the primary (it is this inductance that is the primary limiter of the current during normal operation as it offers much more resistance to high frequency AC - Alternating Current, than to the DC).

The only problem you might have is with the inductive kickback from the primary, which is a voltage spike that happens at the moment when the MOSFET switches off, and it can be many times larger than the supply voltage. From my experience, it is usually about 10 times the supply voltage, and at 12 volts I have measured over 120V spikes, but this depends on the circuit and the components in it.

In your case, the spikes may be well below the 150V rating of your MOSFET, but that's not guaranteed. I would suggest to measure those spikes if you have a scope, and just try the IRFS3415, I believe it will work just fine.

I would suggest you place a snubber made out of a capacitor and a resistor in series, across the primary. The values are typically 1-10nF and 10-100 ohms (1W or so). The capacitor should be rated for at least 150V, but no more than 250V is needed in your case. This snubber should reduce your inductive kickback spikes. In fact, the reason the original schematic requires the MOSFET rated for 200V is because it doesn't include a snubber. With a good snubber, you could get away even with a 60V MOSFET, or even less, but most snubbers waste a small amount of power, so there are trade-offs.

As a last note about MOSFET selection, you can also consider its input capacitance, turn-on and turn-off delay times, and its rise and fall times, but chances are it won't make much difference in this case, depends how high is the driving/switching frequency.

P.S.: At first, you said the primary resistance was 8 ohms, but now it is 2-4 ohms, so I have edited my answer accordingly.

Not the answer you're looking for? Browse other questions tagged mosfet transformer components flyback component-selection or ask your own question.