This is one of the circuits in the Electronics 9/10 class. 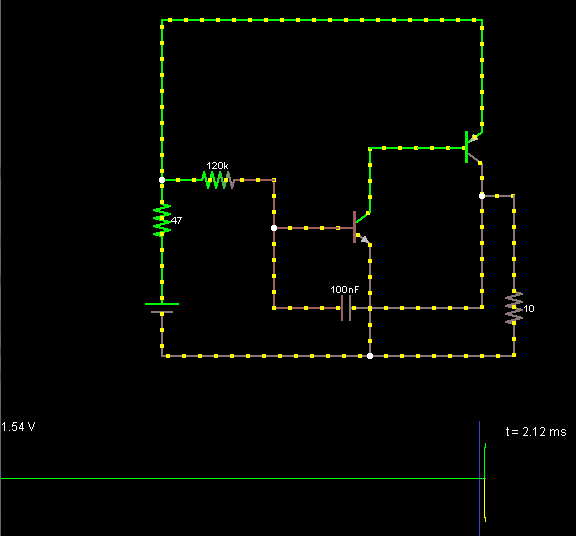 The package did not explain how transistor combination worked and why the capacitor will reverse its current.

Can you explain this circuit? Why I can't make a transistor combination with only two NPNs?

The cap charges through all three resistors, until it reaches a voltage where the NPN base-emitter junction starts to conduct. At that point, the NPN allows current to flow into its collector, which means it begins to draw current from the base of the PNP, turning it on, too. Now, the base of the NPN will be somewhere in the range of 0.6 to 0.8 volts while that transistor is on, and that's one leg of the cap. The other leg of the cap experiences the I-R drop that occurs on the 10 ohm resistor. The closer the PNP gets to saturation, the closer the top of that 10 ohm will get to being a voltage divider formed with the 47 ohm resistor. Now I don't see the battery voltage here, but I'd bet its at least 5V. At 5V, the voltage at the top of the 10 ohm will approach 5*(10/(10+47)) = 0.88 V (discounting Vce-sat of the PNP). This means that the capacitor now sees a voltage higher on the right side, so current begins to flow the other direction. While charging up, the cap built up a charge with (+) on the left and (-) on the right, so the capacitor now looks like a tiny battery in series with the 0.88V on the 10 ohm, so it basically discharges into the base of the NPN, helping keep that transistor on. Once the cap has charged up in this opposite direction, it ceases to conduct, and behaves again like a DC open circuit, leaving the NPN biased only by the 120K, which isn't enough to keep the transistor active. So the NPN shuts off, this kills the PNP, and we're back to the start .. only you can see that the capacitor not only has to charge 'up', it has to actually discharge the reverse-polarity charge first.

It looks to me (with quite limited electronic circuit analysis skills) like the 100nF capacitor charges until it reaches a voltage high enough to forward bias the BE junction of the NPN transistor. When this happens, it discharges its energy through the BE junction to ground until its voltage drops below the minimum BE voltage, thus switching off the NPN. The capacitor reverses its current because that's what they do when faced with a falling DC voltage.

Unfortunately I'm not really sure where to start for your second question so I'll have to defer to someone more experienced (and hope they don't have too many corrections to make about my original circuit analysis). :]

Not the answer you're looking for? Browse other questions tagged capacitor transistors oscillator or ask your own question.