Why is my infrared transmitter/receiver circuit not working?

I tried to make this circuit, but it didn't work like it should. I thought my connections were right but maybe it not.

This is the circuit diagram:

This is my layout. (I used other components as placeholders) 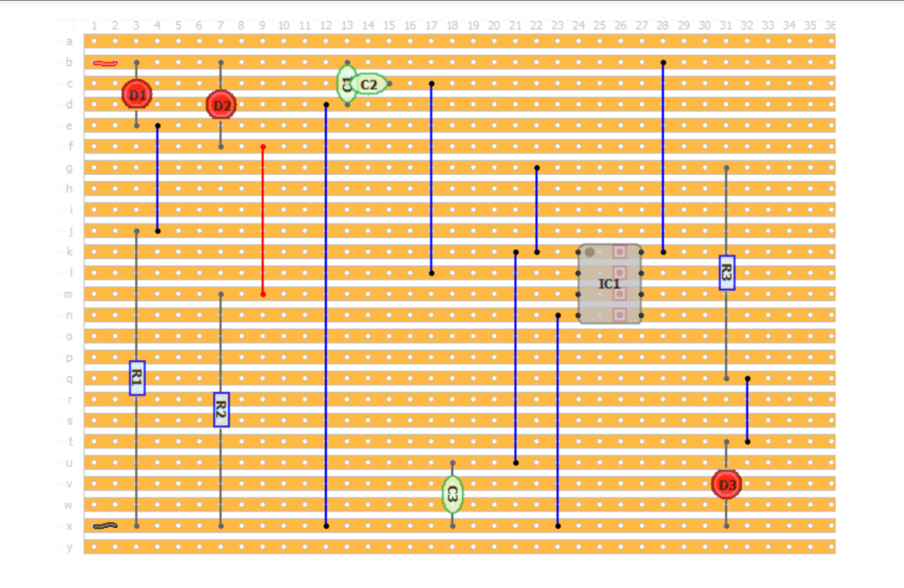 What is wrong with my circuit? Is something off and disconnected?

You seem to have used a 22Ω resistor for the LED instead of the 220Ω shown in your schematic, and the link between the LED and that resistor is missing (fortunately for that poor LED).

The graph of figure 10 on page 10 of this LM358 datasheet, it can be seen that the output is unable to swing to the positive supply voltage, when sourcing current. If your buzzer requires 30mA, and the LED draws another 20mA, for a total of 50mA, this is enough to cause the output to drop to 0V. If you're lucky, 4V out. Use that chart to determine what you can expect the LM358 to output, given the current you draw from it.

Here are a couple of better ways to drive a buzzer and LED from that output, which will alleviate the load from the LM358, and transfer the effort of driving the LED and buzzer to a separate transistor: 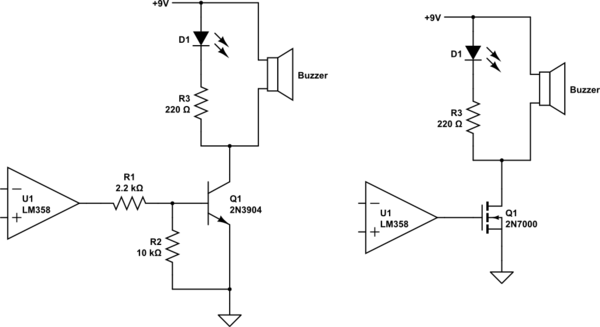 I doubt that a reverse biased LED or photodiode in series with a 10kΩ will provide enough current to "lift" the potential at the opamp's non-inverting input very far above zero, if at all, and that input is flirting with the input voltage range limits for the opamp.

Perhaps a larger resistor, like 100kΩ (R6 below) would be a better choice (yielding a larger voltage drop from that tiny photodiode current), even 1MΩ. You could probably benefit from artifically raising that potential to a volt or so above zero, with another large resistance (R7 below), just to get the voltages at the opamp inputs to something more appropriate for the opamp: 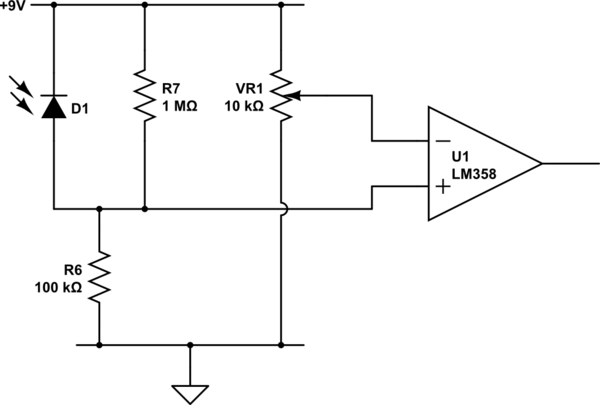 The 220Ω resistor seems too small for the indicator LED. Assuming it drops 2V, the remaining 9V-2V = 7V across the resistor will cause this current to flow (using Ohm's law):

The nearest appropriate E12 resistor would be 680Ω.

Point your LED and photodiode at each other, so that the photodiode receives as much light as possible. This will help troubleshooting, at least during testing.

Since the entire circuit is in the DC domain all you may need is a voltmeter to check voltages at the op amp terminals.

The LED is not connected to resistor, it is disconnected.

On the other hand, it looks like there is a solder bridge which shorts the LED directly to buzzer pin.

There might be other solder bridges as well at the op amp inputs, which may be the reason nothing works. It is also impossible to say if you have LEDs and the photodiode connected with correct polarity. You can use a mobile phone camera to see if the infrared emitter outputs light.

Not the answer you're looking for? Browse other questions tagged led stripboard buzzer or ask your own question.

10
Reducing number of resistors
7
Why doesn't this work? (Simple Circuit)
1
Line level voltage to drive LED display
2
Modifications to 555 LED Fade Circuit
0
led wont turn on in series circuit
1
Why will my led not light up & why does my input voltage fluctuate when I add a wire?
1
Connecting an IR receiver to Transistor for current control
0
Power Supply stopped working after soldering
10
How to drive 700mA LED cheaply?