I am making a simple lora transciever and absolutely want to fit it on a single side dual layer 0.8mm thick pcb. Which makes impedance matching a bit tricky with 53mil traces...

Here the form factor of the final case it will be in forces me to place the spring antenna a bit creatively, which works fine and is tested. I am doing a new board revision trying to improve on the design a bit and see if I an get better rf perfomance.

I am wondering if I should pull my GND and VDD polygon pours up the arm that is used to mount the antenna to get better impedance matching or if the planes would reduce the RF performance by being in the way even more than what my design is currently doing. 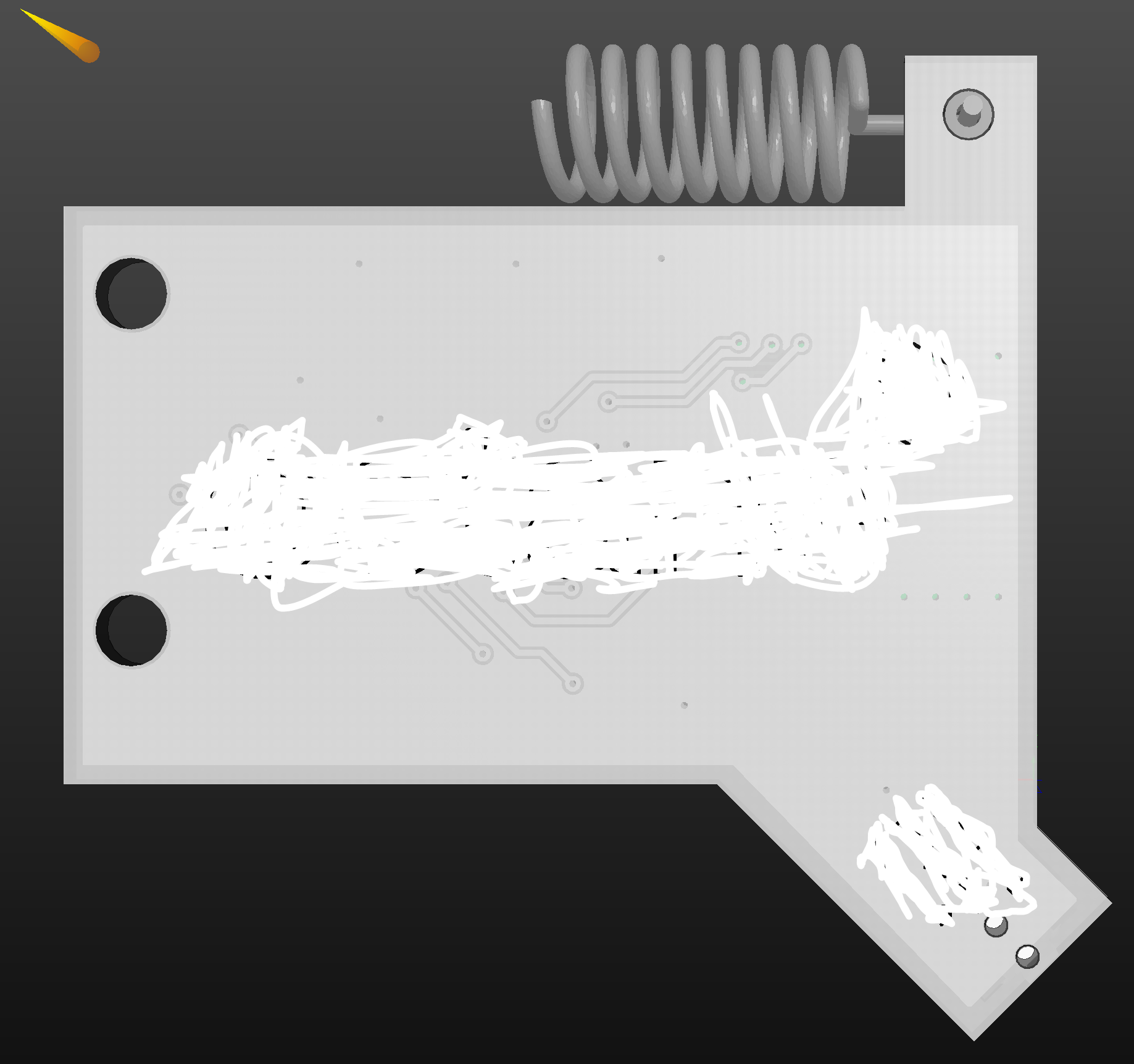 Any tips on this would be greatly appreciated! Thx

No, you should not extend your power plane pours. In fact, you probably need to remove some of of your copper (all of it, pours or traces) from the top edge of the PCB.

This isn't about impedance matching, and unless you are actually doing manual impedance matching (estimating with calculations or via simulation, or both), then nothing is going to 'help with impedance matching'. The only thing that will help with that is carefully determining the values for the matching network, which requires taking into account not just the PCB and antenna, but the enclosure.

Does that antenna have a datasheet? It should give a keep out area. Besides the feed line and the antenna itself, no other conductive materials should be within the keep out area. For the best antenna radiation and reception, this keep out area should extend all the way along the 'long' axis, or orthogonal to the feed line. That is what determines if you should put any pours on the top tab.

So don't do that.

If there isn't a datasheet, then you'll have to estimate the keep out area yourself. The rule of thumb is to make the keep out area (which is a minimum distance from any part of the antenna to any other conductor) is twice the reactive near-field distance.

The reactive near-field distance can be approximated like this:

Where \$ D \$ is the largest dimension of the antenna (which would probably be the length of the helix's axis in your case), and \$ \lambda \$ being wavelength of course.

For 868-915MHz, rounding up, twice that amount gives you about a 6mm of minimum keep out distance. So make sure you are meeting that reqiurement, the antenna looks awfully close to those ground planes at the board edge.

But also keep the plane a straight edge along the length of the antenna, but spaced with that 6mm gap. This is also serving as the ground plane for the antenna.

Also, are you using a plastic enclosure? You will want to ensure you maintain that 6mm gap (or more if possible) between the antenna and any plastic enclosure. Plastics of all sorts have much higher dielectric constants than air, and if any get too close to your antenna, it will effectively increase the electrical length of the antenna and detune it, pushing the resonant frequency lower (and thus, your radiation efficiency as well).

So there is probably little advantage to using an actual coil of wire like that. If it were at a right angle to your PCB, that is a different story, but mounted like this, I think you would probably get better performance by following app note from TI to make a PCB helix antenna. That way you have better control over dimensions and spacing, have the matching network already done for you, you can be sure you have things at their optimal position, etc.

Oh, and the best part about PCB antennas is that they're free. Unless you pay for boards by the square inch, then they're still probably cheaper than buying an actual physical antenna part. Also the antenna in that app note is teeny tiny but still quite good (64% EB efficiency typical).

Not the answer you're looking for? Browse other questions tagged rf antenna impedance-matching lora sub-ghz or ask your own question.