Do you have to use an instrumentation amplifier to measure voltage across a 0.01 ohm shunt?

I was planning on implementing a current sense feature on the STM32 Bluepill to measure the current output of a solar panel (150 mA short-circuit current, 14 V Open-circuit voltage) using LM358 single-supply op amps and a 0.01 ohm shunt. No matter what I tried however, I kept getting an inaccurate output value (way bigger than expected, 0.7 V below the positive rail).

That led me to the conclusion that the issue might be caused by the difference between the ground voltage of the op-amp and the measuring loop (schematic below). This made me question whether it was even possible to measure current across such a low resistance shunt using a differential amplifier, or if something else is causing my circuit to act unpredictably.

It is important to note that the resistance between the breadboard pins I am using is 0.07 ohms which is probably the culprit here; in addition, when measuring the voltage on the input pins of the op amp with respect to op-amp ground (the pin itself) I noticed that their values are different from the ones with respect to the ground of my power-supply, and the output seems to correspond to their values and not the ones I intend to amplify. In other words, there doesn't seem to be a problem with the gain of the amplifier, or at least as far as I know.

I would love to get some clarification on this, in order to decide whether to buy instrumentation amplifiers or not.

Note: I also saw people placing ceramic capacitors between the positive input and ground and between the output and ground in this configuration. I thought since the problem might be noise-related then it would probably fix this issue, but it didn't.

You don't have to use a differential amplifier providing you are careful about the voltage drops that occur along the grounds. If you return the bottom end of the 500 ohm resistor to the same point as the ground end of the sense resistor it should avoid most of those errors.

However, one of the first things to do with this sort of problem is to ensure that the voltage from the sense resistor is a good match for the sensitivity of the amplifier.

With a 10 m Ohm sense resistor and 150mA max current the sense voltage will only be 1.5mV. However, the offset voltage of an LM358 is in the region of +/-3mV. Double the voltage you are trying to sense. The circuit will not accurately measure the current flow.

Why choose a 10mOhm sense resistor with a 12V panel you can afford to have a much higher burden? 1 ohm would be a more appropriate value. This would give 150mV max sense voltage a very small amount compared to the 12V of the panel. To get a 3V signal then only requires a gain of 20. The amplifier offset voltage would only contribute about 2% error.

You should also use a better amplifier - low-cost ones can have less than 1mV offset. Also, the LM358 is not well characterized for 3.3V operation. As its output can only get within about 1.4V of the positive rail (depends upon load) the output voltage will be restricted to ~1.9V or less. A rail-to-rail output opamp is much better when running from 3.3V supplies.

Solar panels are convenient in that since both terminals are floating (ie not connected to the ground) the amplifier can be operated in inverting mode with the sense resistor connecting to the negative end of the panel - it will still give a positive-going output and gives the option for panel to charge the battery that is powering your circuit. I have used this approach on small solar-powered instruments where the charging current of the battery can be measured.

I also have the ability to short the positive terminal to the ground so that the short-circuit can be periodically measured to determine the solar intensity.

Here is an example showing how to measure the charging current while charging a battery that can power the amplifier as well as other circuitry. If the non-inverting input of the opamp is connected to the ground close to the sense resistor any ground shift is attenuated by a factor of 20 as it is relative to a 3 volt signal.

You have an amplifier with a gain of about +2000 and an offset voltage of as much as +/-3mV at room temperature. It might typically be +/-2mV (onsemi datasheet). Since the output swing with no load and a 3.3V supply is from some mV up to maybe 2V, the zero-current output could be about anything within that range. Your entire full-scale input signal is only 1.5mV, so 15uV represents a 1% error. That is very little voltage.

You don’t need an in-amp (though it would make it easier and allow sloppier design) but you should get an amplifier with a very low offset voltage and probably rail-to-rail output and input that includes the negative rail.

The “ground” on R2 is also extremely critical- it must go back to the sense resistor directly, and it ideally would be slightly divided as a differential amplifier, but here that is optional when you consider tolerances.

First of all, if you are measuring a sense resistor that is connected to wires, then there will probably be ground offset. You will need a differential measurement to handle that.

The op-amp circuit you have shown is configured for a single-ended measurement. It needs to be set up for a differential measurement to account for the ground offset caused by the wire resistances. Also you need to use separate wires for the current measurement and the power return (kelvin connection). If you let significant current flow in the sense wires it will create measurement error due to the wire resistance. 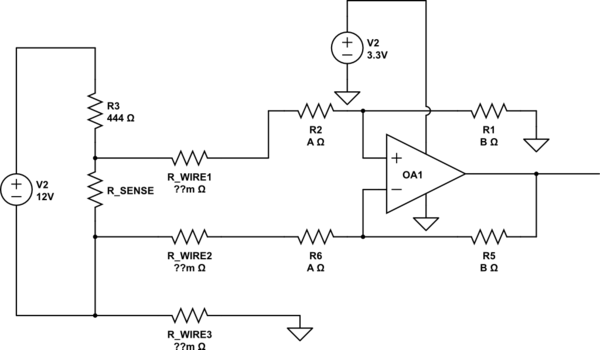 Additionally, using a large sense resistor will provide more accurate measurements. Even something as large as 1 ohm would be reasonable for a 12V circuit running only 150mA.

There are several options for making an accurate measurement.

Realistically, you need something better than what you're working with. tl, dr: you need a better op-amp and a better design. We'll get to that in a moment.

On the other hand you don’t need an instrumentation amplifier, which is a specific setup composed of 3 op-amps (2 followers and one differential) that is used for amplifying high impedance signals. Current sensing using a low-ohm shunt isn’t that.

I understand the desire to use a low value sense on the low side. You're trying to eliminate the ground shift at your Bluepill. You also want to limit the LM358's input range to its supply rails (and at least than 1.5V below the + rail.) That's a common approach that allows you to use an ordinary op-amp if the gain being asked for isn't large. The LM324/358 is great for that, as long as you understand its limits.

But you have a bit of an XY problem here. Your chosen op-amp quality, the single-ended topology, the low value sense resistor, and the huge gain (Av=2000) you're asking from that op-amp are all conspiring against you and making your life much harder than it needs to be. That LM358's input offset is killing you, swamping the tiny sense voltage you're trying to work with. It’s an old, cheap device not really suitable for precision measurements.

Let's re-frame the approach then. So, five things:

You could possibly do all this by an op-amp that has "over the top" capability, and construct a classic differential sense circuit. Maxim and Analog make several op-amps that can accommodate common-mode higher than the op-amp V+ rail, like the LT6015 for example.

But... there are excellent specialty amplifiers designed specifically for current sensing: low offset, can be used on either low side and high side, and "over the top" common-mode are all supported.

I've used the LT6105 on the +12V high side with good results. The LT6105 has current-source output, so it's very easy to scale the voltage range to whatever your ADC requires just by changing the load resistor. In your system it could be powered by the Bluepill's supply, by your voltage input, or any handy supply that gives you enough voltage compliance range.

The MAX4173 is billed as 'low cost' and is in an SOT23-6 package, so pretty small, smaller than the LM358 you're contemplating now. Same thing with the power supply, it won't care as it also does "over the top".

There are others, but you get the idea. It's a popular device type.

With this small shunt resistor you get tiny voltages, which needs special care to measure. As already mentioned, you need amplifiers with very low offset voltage and drift, e.g. chopper amplifiers like LTC1049 or LTC1050 (I once used these kind for a similar application to measure 400A precisely for a MRT magnet). Measuring such low voltages is possible, but needs to handle thermoelectric effects by carefully controlling temperature gradients and choosing material combinations with low thermoelectric coefficients. Unless measuring currents in the 100 or more amp range, just pick a larger shunt. Choose a resistance which gives you acceptibly power dissipation (e.g. 0.5W) at your maximum current.

The schematic is a well known application of op amps (bipolar supplies). Output voltage negative but can be changed by a classic inverting amplifier. A active virtual ground point can be used for unipolar supply (independant !) for the measurement system. 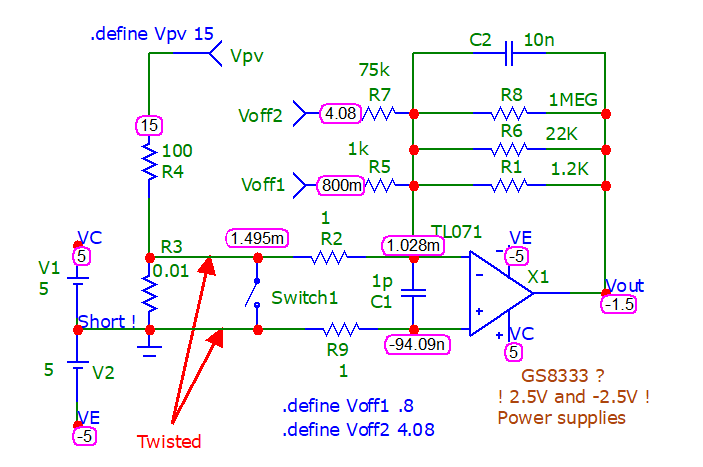 An with the use of a instrumentation op amp AD620 (simulated)

Not the answer you're looking for? Browse other questions tagged operational-amplifier current-measurement differential instrumentation-amplifier shunt or ask your own question.

1
Where has this current gone in my current-voltage converter?

0
Instrumentation Amplifier output mysteriously increases upon connecting across a resistor, compared to connecting the same voltage directly across it
0
Instrumentation amp not measuring voltage across capacitor, piezo energy harvester
1
How to measure the current delivered to the load by a high voltage (>50 V) non-inverting op amp amplifier?
1
Battery current measurement with shunt resistor
0
Why does the voltage across a shunt spike then settle?
0
creating a differential amplifier for low voltages (current shunt)