Is there a simple fix for summing 2 AC signals?

I have seen many mixer schematics. They are pretty much always the same - a stack of resistors.

Even some DJ mixers using the SSM2164 simply joined outputs followed by an opamp. The same thing always happens - the amplitude gets bigger after combining 2 or more signals.

Then I found this question.

I have read a little on the LM3900 and the application note, page 41, not sure about that one.

The guy mentioned something about using current instead of voltage, so I figured, let's try with an LM13700, since they output current.

The same thing still happens: remove one of the 1 ohm resistors in the summing bus and the amplitude drops to to 50%. 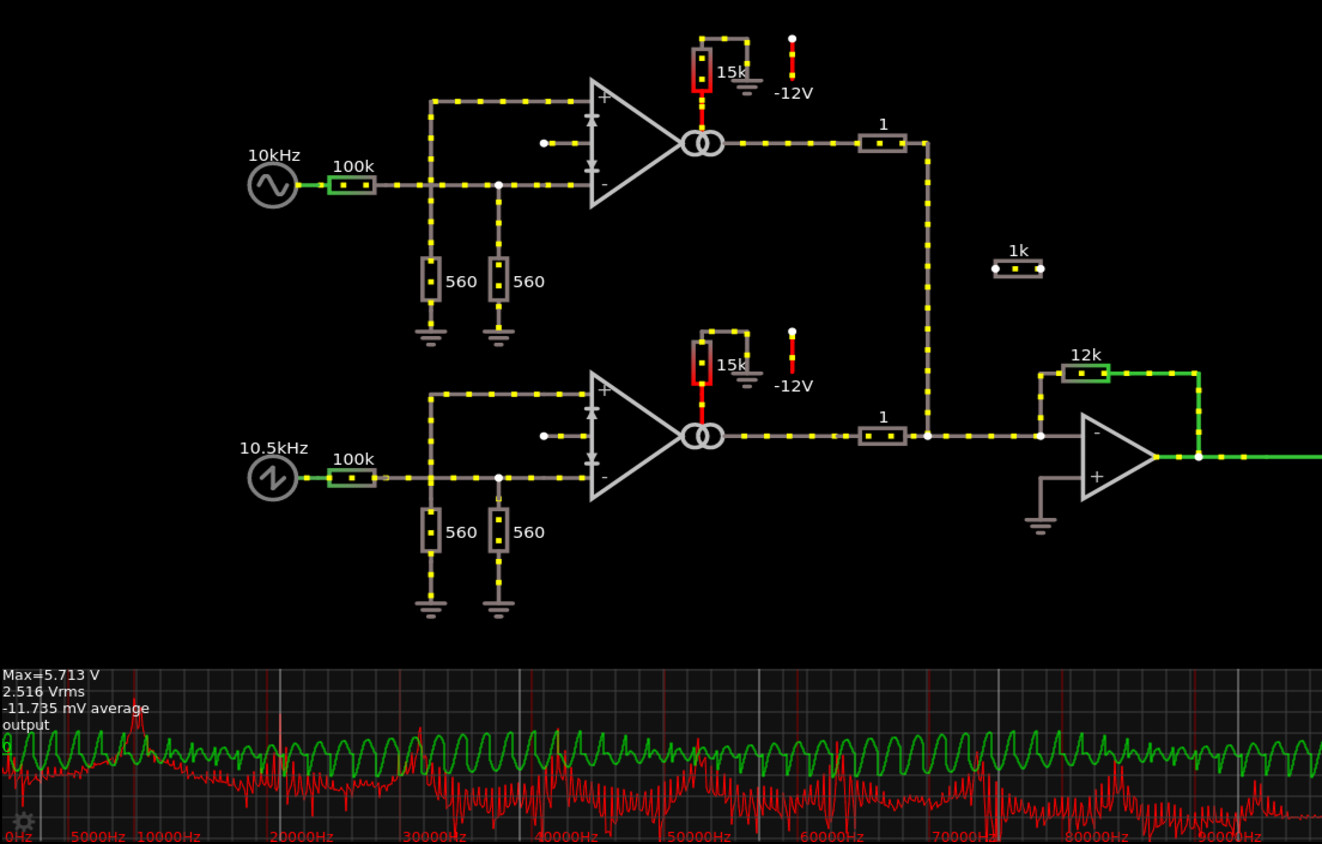 Does a (simple) fix exist for this, while keeping the LM3700, not using microcontrollers?

(I didn't do the AC coupling so far.)

The same thing always happens - the amplitude gets bigger after combining 2 or more signals.

...unless you reduce the amplitude before, during, or after mixing the signals. The simplest possible mixer (a resistor in series with each input, joined together at the output) does this automatically because it halves the level of each input.

But you linked to a question which asks about 'Combining 1, 2 or 3 audio signals so the output always has the same amplitude'. If this is what you really want then you have a dilemma. When combining two linear signals without distortion the peak output amplitude could be up to double the value of a single input. If that is not acceptable (eg. because it would overload a following power amplifier or speakers) then you must reduce the output level, and then each input will be weaker at the output.

So consider what you are asking for. A linear system must be able to handle the combined instantaneous levels of each input without distortion. If the combined signals may exceed the system's capability then you must reduce them, but if they won't then you don't want to reduce them. That means you need some kind of level control that adjusts the gain or attenuation to keep the output level constant no matter what the inputs do.

But with an AC signal the instantaneous level is constantly changing, and the circuit cannot predict what a 'random' waveform will do, so it cannot know what the peak level is until it has already occurred (by which time it is too late to adjust the gain). The upshot of this is that you cannot do what you want with a purely linear circuit.

So you have two choices:-

You could use manual level adjustment (eg. a volume control on each input) to suit different situations, or simply not worry about it. When two signals are sent through the same medium it is often expected that the combined level will be higher, and the system should be designed to handle it.

This 'automatic' gain control will necessarily introduce distortion while it is changing the gain. To act fast enough to catch transients the signal must be delayed so the gain control has enough time to act on it. But acting to fast causes more distortion. To avoid this the gain must be changed slowly - which produces 'breathing'.

Designing an AGC circuit that minimizes undesirable effects is not easy. It is generally only used in applications where manual gain control is impractical (eg. radio receivers, remote microphones), when some distortion is acceptable, or when the level is normally relatively constant.

The guy mentioned something about using current instead of voltage, so I figured, let's try with an LM13700, since they output current.

There is no advantage using an LM13700 over a standard op amp because the circuits are equivalent. With negative feedback the inverting input of the mixing op amp is a 'virtual earth' which the op amp keeps close to ground. That means the mixer resisters already convert the voltages into currents.

Not the answer you're looking for? Browse other questions tagged current mixer summing ota or ask your own question.

0
Combining 1, 2 or 3 audio signals so the output always has the same amplitude. LM3900