How do I stop buck converter voltage from dropping whenever current increases?

I built this buck converter circuit using the LM2596T-5 (5 V OUTPUT, 12 V INPUT) using the exact components mentioned in the datasheet's first page (schematic below), except for the diode.

I used the 1N5822 because the 1N5824 wasn't available at the store: the only difference between those two lies in the maximum current they can handle, which isn't a problem, since I'll only be driving a load that draws 2 A maximum.

The regulator works just fine with loads that draw anything below 1 A. Once we go past that however, the voltage drops significantly (even reaching 1 V if I insist on drawing more current.)

I immediately suspected that the inductor might be the root of my problem here (33 µH inductor, see pic below.)

I tried swapping it with another inductor of a higher value (1 mH inductor) but the problem persisted.

This probably means that the inductor is getting saturated and is no longer storing sufficient energy for proper operation.

I confirmed this when I changed the 1 mH inductor with a 100 µH inductor in a different package, which in turn, raised the bar to 1.2 A before voltage drop.

How do I deal with this exactly?

Unfortunately the inductors that are available in the stores near me do not have any sort of reference numbers or manufacturer names written on them (only inductance value codes) so I cannot see their datasheets, which is quite a limitation.

I've read in a different post that this issue might be caused by the ON/OFF pin when left floating, but I did check if that was the cause and it definitely wasn't.

Would making an air-core inductor be a valid option? As far as I know, those cannot get saturated, since they have no core, and if so, then would regular connection wires (covered with plastic or silicon) do the trick?

Note: The soldering traces might be the issue here (since I am not very good at soldering) but that still doesn't dismiss the fact that the current is dependent on the inductor. 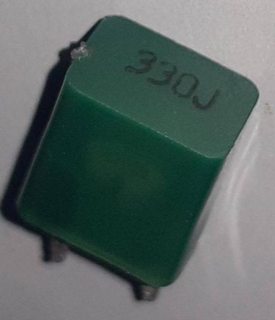 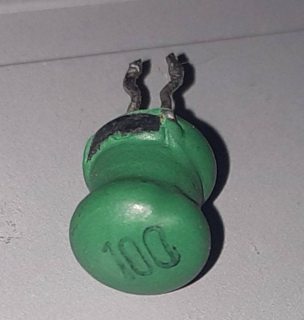 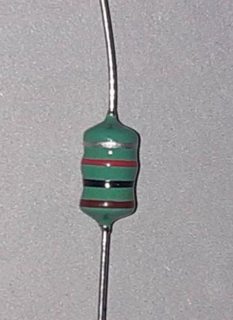 Here is the relevant graph: 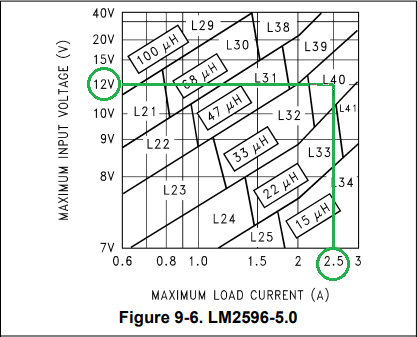 You'll see that I'm using a margin of an extra half amp of power, and the intersection falls at L40, which is 33uH at 3.5 Amps min continuous power. In that case, you need a beefier inductor -- my choice is Pulse Electronics Part# PA2729.333NL, 32.9 µH Shielded Wirewound Inductor, 6.7A Max continuous, 18.5mOhm Max, having 8.4A Saturation current limit, at $3.31 for one at Digikey.

An unshielded inductor may work, but may cause EMI or other problems.

Not the answer you're looking for? Browse other questions tagged switch-mode-power-supply inductor buck component-selection saturation or ask your own question.

7
How to measure coils without inductance measuring device?