Can two electromagnetic coils repel and attract with both like poles?

I was playing around with two EM coils where they have a steady flow of DC current through them.

Theoretically, both of them should be magnetised to have a stable north and south pole, a typical dipole field.

When I make both their like poles face one another, they are able to repel but when they get close enough, they somehow "merged" and attracted one another.

If I put them at a close distance but not too close together(~0.8cm,) they will repel as expected.

Why is this happening? I am using an Arduino with some drivers to drive the EM coils.

I have read this but it seems that for this case,the two magnets of interest have different magnetic fields. The magnetic field and current through the coils should be approximately the same but it is still happening.

Added photo of the two coils where the like poles are facing one another. 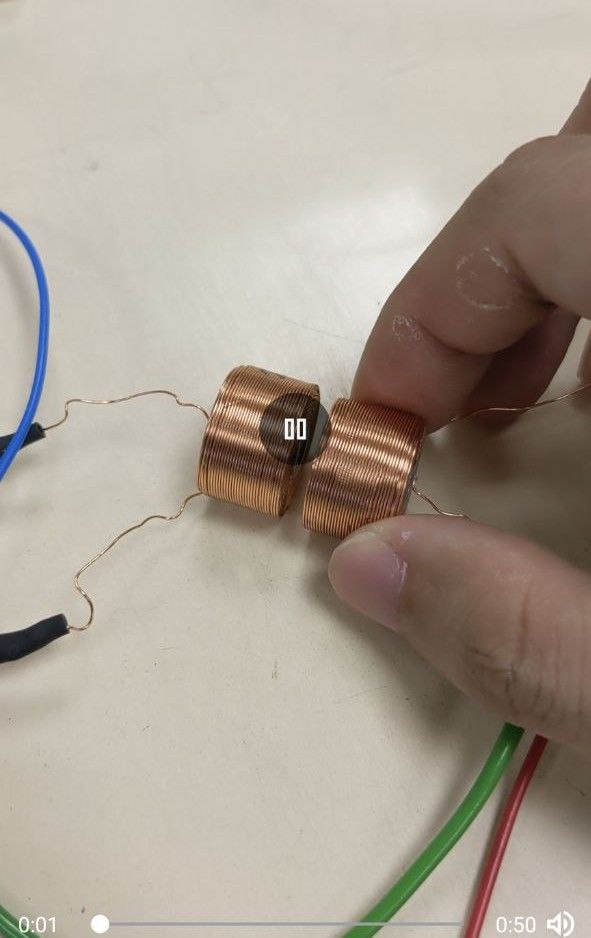 Look at systems where you can get force in both directions.

Dismantle a loudspeaker. There is one permanently activated magnet (in the 1930s this was usually a DC driven electromagnet) and a voice coil which can move in the gap in both directions.

Note also the design that concentrates the magnetic field in that gap where the voice coil acts on it directly, and never completely leaves the gap. This is quite an efficient magnetic circuit unlike the long air paths between your two solenoids.

There is no ferrous component in the voice coil. If there was, it would just glom onto the magnet regardless of whatever the current was.

Imagine one of your solenoids is DC driven and call it your magnet. It attracts the core in your other solenoid, regardless of the current direction in the magnet. Clunk! The magnetic field stores energy in the air gap between them (creating a force pulling them together). As they move together the energy is released and the magnetic reluctance decreases.

Current in the other winding creates flux which will either add or subtract to this attraction. The core reduces reluctance increasing the flux over an air core inductor, but you'll still need quite some current to cancel it out altogether and start seeing repulsion.

(For another style of voice coil actuator, dismantle a hard disk drive, and you'll see a rotary one that moves the heads in an arc across the drive surface)

Not the answer you're looking for? Browse other questions tagged arduino electromagnetism coil or ask your own question.