Using a MOSFET to power LED for low power applications

I'm creating a low-power IoT sensor node and I wanted to place some LEDs on my PCB. The chosen LED has a forward current of 2mA, which my MCU can easily supply, however I was wondering, as saving power is important, would it be more efficient to connect the MCU to the gate of a MOSFET and power the LED directly off the battery? (please refer to attached image).

I'm not sure if it'd be more efficient to power the LED straight from the MCU or to control it via an MOSFET.

I am aware typically MOSFETS are useful with LEDs that draw a current higher than an MCU can supply but I wasn't sure if this might be something else I'm unaware of. 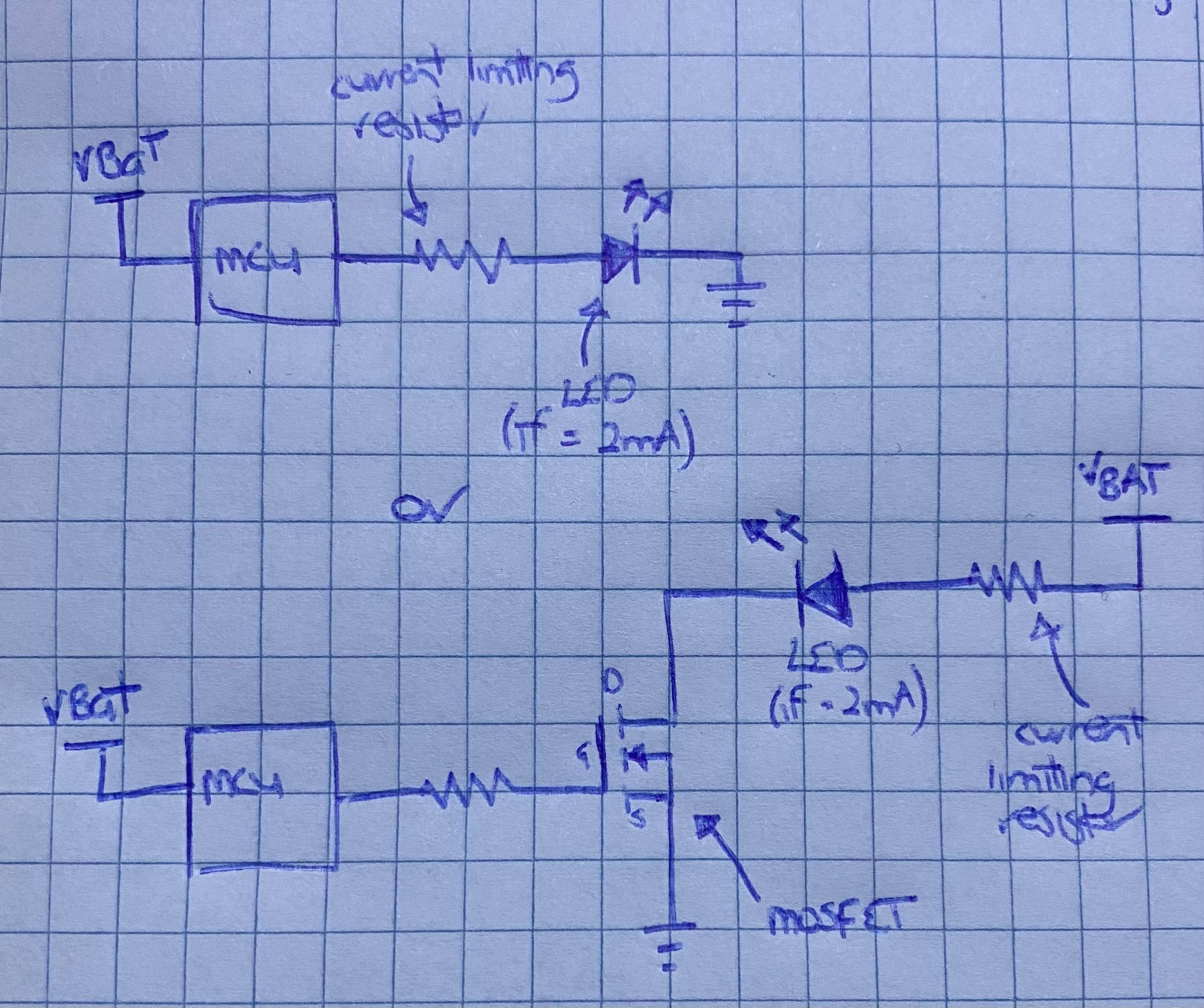 When you use a MOSFET and the LED is driven to be off, there will still be a leakage current through the MOSFET from drain to source. Go to your favourite MOSFET data sheet and look up the \$I_{DSS}\$ parameter; it might be 10 nA or it might be as high as several μA but, either way, it represents a slight extra long term energy loss compared to driving the LED from the IO pin of the MCU (if that can be done effectively).

When people drive MOSFETs, many folk will consider putting a gate-source resistor across the MOSFET so that when the MCU crashes or is in a power down situation during start up, the MOSFET doesn't inadvertently drive the LED. This is another loss when activating the LED.

You should also consider pull-up and pull-down resistors internal to the MCU and see if they are actually helping reduce power wasted.

If your MCU is powered by a DC-DC it would be more efficient to use it directly, if it could actually swing enough I/O voltage for the LED (more about this below.) If it’s using an LDO, it doesn’t matter, the sum of IR drop power loss through the LDO and load resistor would be the same as going directly to Vbat with the load resistor.

The problem in most systems is that LEDs need some minimum forward voltage (Vf), between 2 and 3V depending on color, plus enough voltage overhead for the load resistor to work properly with the variation in Vf. This may oblige you to use FET buffer anyway, and even then, to choose an LED with lower forward voltage if your voltage is, say, a LiPo with 3.7 ~ 2.7V out.

Not the answer you're looking for? Browse other questions tagged mosfet led low-power or ask your own question.

3
Tips on parts for a very low power LED blinker
10
Power MOSFET overheating at 1A
0
LED Cube - Drain Current Resistor for MOSFET Switch
3
Connecting two LED stripts with individual power sources to one MOSFET
1
Flash an LED with an extremely low power source
1
Power capacitor needed with high current LED
1
How can MOSFET drain be used as ground for a load?