What is this unusual NPN-PNP transistor pair?

I was looking for the datasheet for a transistor I'd discovered during some reverse engineering, a DK52T. Unfortunately I can't find its datasheet, but I found one for the DK52D. See the image below; this is some kind of weird combination NPN-PNP transistor I've never seen. I thought it might be something called a Sziklai Pair, but it doesn't fit that configuration either. How is this thing supposed to work?

It would seem to me the moment the base of the NPN goes high, the collector goes low, which in turn pulls the PNP base low, whereby it goes into conduction and turns the NPN base off. Basically the moment the transistor is turned on it shuts itself down immediately, WTF?

Is more specific information on the DK52T available (which should be very much similar to the datasheet I've attached)? 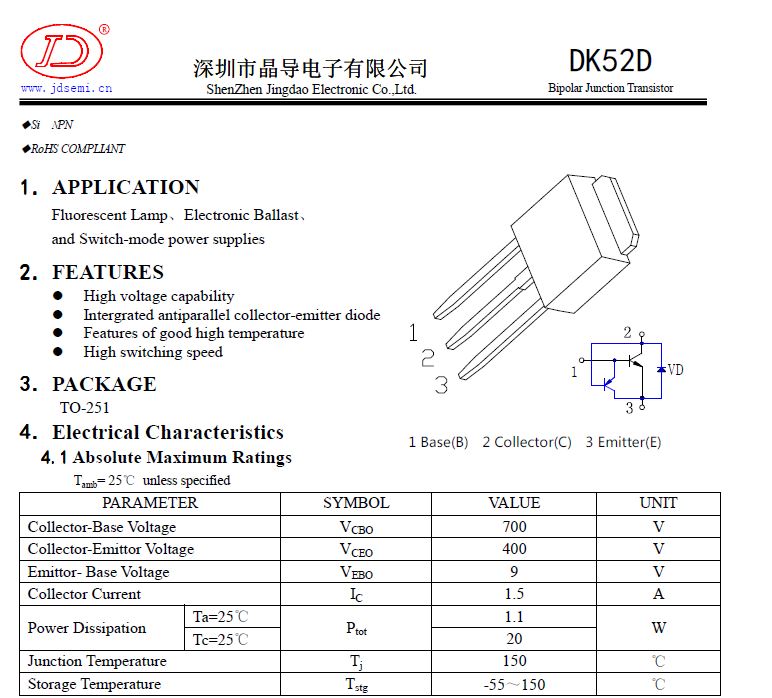 These transistors are devices which are highly optimized for use in ultra-low-cost and high-volume consumer products- off-line fluorescent lamp ballasts.

The anti-saturation network (for fast switching) and free-wheeling diode are integrated onto one die, minimizing the component count and silicon area required (the diagram shows two parallel 'fingers' of the composite power transistor):

The lateral PNP transistor structure prevents saturation and results in less Vce(sat) on the device compared to a typical multi-diode Baker clamp configuration. It does this by shunting away base current from the NPN when Vce drops below a volt or so. Note that the lateral PNP structure has a Veb breakdown voltage of at least 700V so it's not like any discrete PNP transistor (closest perhaps to a high-voltage PNP transistor operated in inverse mode).

More in this 1990s-era application note from Motorola (now Onsemi). In many datasheets they avoid showing the detail and just show a network within the part: 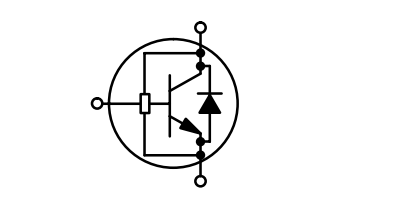 The transistor boasts "high switching speed" it gets this by having the lower transistor turn on and steal base current when the main transistor approaches saturation.

Thus it is a type of Baker Clamp

That is a strange part. At first I thought it was an integrated Sziklai pair, a type of Darlington with a lower saturation voltage. But your part is different.

When the collector goes below the emitter, the first transistor will turn on and short the 2nd transistor's base to its emitter, completing its turn off much faster by sucking out its base charge.

In the 60s and 70s, when PNP power transistors were expensive and sucked, a Sziklai pair was a way to use an NPN power transistor for both the pull up and pull down sides of a complementary output stage, called a quasi-complementary stage: true Darlington pulling up, Sziklai pulling down.

I don't think I've ever seen a datasheet for an integrated device; all of my experience is with discrete component equivalents.

Revised after some thoughts, "saturation clamping" makes more sense. The way how the PNP works in the circuitry (clamping) is effectively what Baker Clamp is for. Thus, the manufacture's drawing seems agreeable.

It would seem to me the moment the base of the NPN goes high, the collector goes low, which in turn pulls the PNP base low, whereby it goes into conduction and turns the NPN base off. Basically the moment the transistor is turned on it shuts itself down immediately,

The collector goes low, but only as much as Vbe - Vce on PNP base-emitter. Thus the PNP does not turn on.

The purpose of PNP is to prevent the NPN conducting when the device is reverse biased (reverse-active mode); Ve > Vc & Vb > Vc. This is the case when two of the devices are back to back connected (antiparallel/inverseparallel) for AC applications.
PNP splits NPN base current when the NPN gets saturated (thus the Vce decreases). 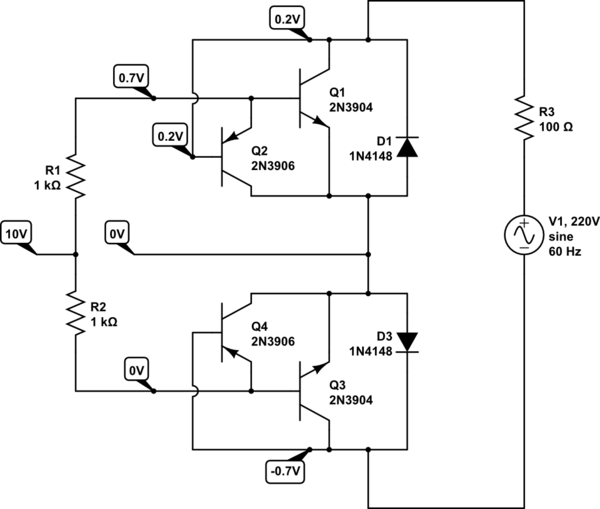 Not the answer you're looking for? Browse other questions tagged transistors bjt darlington or ask your own question.

2
H-bridge with BJTs: why do IC and discrete solutions differ (or Sziklai vs Darlington)
0
Circuit works with BC557 PNP transistor, but not TIP32C?
0
How to open and close PNP transistor with IO pin?
0
Why do most Passive Buzzer Modules for sale online use PNP transistor?
0
How do I implement a DPDT-switch here using NPN/PNP instead?
2
Light up an LED with an NPN transistor in active low?
2
Transistor toggle by NPN and PNP - how is it build?
3
Current mirror: is there a name for this NPN-PNP pair, and how does it work?
5
What advantages does the Darlington pair have over the Sziklai pair?
2
Is this a correct way to use an NPN transistor to disable a push button?