Doubts on Implementing a Simple Protocol for XBee Comms

A system that I'm developing will use XBee modules for a point to point connection between a micro-controller and a PC. Data will only be sent only in one direction -Micro to PC and at 10-20fps. The data portion of each frame will be 4 Bytes. XBee modules will be run in transparent mode(to begin with at least). On the PC side I'm using python to grab the data from the serial port.

Initially I wrote a very simple python program to grab data 4 Bytes at a time from the serial Port, which worked fine when tested with a virtual com connection (I haven't run any real world tests yet though), but I decided to experiment and ended up implementing a simple frame structure like this.

After some research I discovered HDLC and now I'm considering implementing something similar albeit simpler. Before I endeavor to do so Id like to hear what others have to say.

When is such a protocol merited?

What have you done when you implemented your XBee networks?

Being somewhat new to this area I'm sure there's some relevant specifics Iv left out, but at the same time I didn't want to make the question too narrow / system specific, but if necessary Ill update the question.

I'm going to be using Xbee modules. I'll be trying to use a point to multipoint network.

At the moment, I plan to have a transmitter identifier, payload type, payload length, payload and checksum - it would look something like this:

That's how I imagine it, the format might change but this will be the basic protocol in use.

When you come out of transparent mode, I assume that the XBee exposes the payload of 802.15.4 frames to your application. However, it's possible that your data will be packed into a ZigBee APS/NWK frame too. 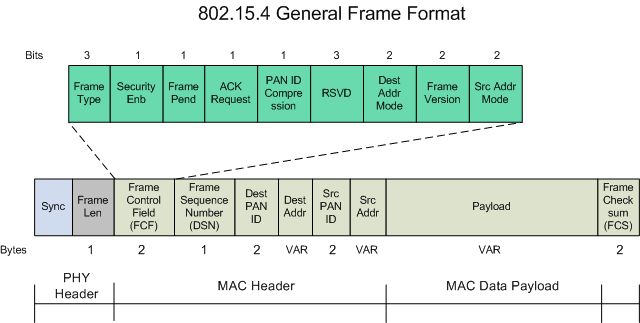 The maximum allowed payload size will be less than 128 bytes

Frame delivery and reception are unreliable

The XBee API may allow you to read the sequence numbers from the underlying packets. If not, you will need an incrementing sequence number and a retry mechanism.

My situation is a bit more complex (Home Automation system), so this might be an overkill for you, but I've decided to go with Binary JSON-based protocol. It's flexible, extensible and really easy to implement.

Not the answer you're looking for? Browse other questions tagged serial communication xbee rs232 or ask your own question.