hello im trying to make a usb receptacle for my microcontroller, im planning to use USB Type C, Although i only need USB 2.0 functionality i might as well design it to specification so that the mCu will work on any computer and any* possible cable configurations most importantly USB C - USB C and USB A-USB C.

The receptacle i have is a 16pin(12 legs) one, I have shorted the redundant pins such as GND, VBUS, D- and D+. But i dont know what to do with SBU1, SBU2, CC1, and CCC2. What should i do to those pins? I would also want that the board will work with USBC PD power supplies. The board only needs the standard 5v 1A (500mA is fine).

I have read that CC needs a pull resistors but i do not know the exact value, or is it best just to leave it floating? Does the USB specification what to do on devices only needing USB2.0 functionality but is using a USB C receptacle? 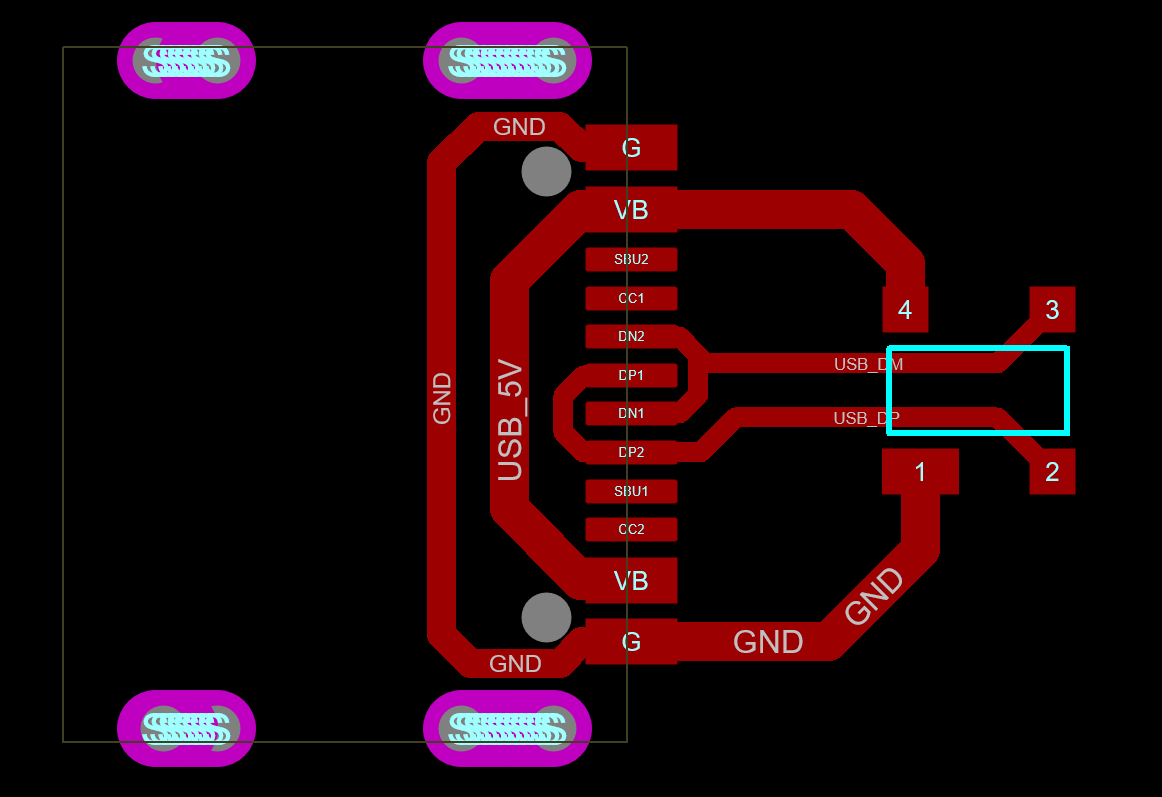 I'm assuming that your board with a microcontroller will take on the role of a USB 2.0 device (as opposed to a host). If so, it needs to wired up like so:

The RP2040 microcontroller (and the Raspberry Pi Pico) can act both as a USB device and a USB host.

For the USB-C connector, additionally changes are needed for the host role. CC1 and CC2 should have a pull-up resistor of 36kΩ to 3.3V (or 56kΩ to 5V) instead of the pull-down resistors.

As a host, the Raspberry Pico can no longer draw power from the USB bus. Instead, it must have an independent power supply and provide power to the USB bus.

Take a look at USB Type-C specification. What you are trying to do is a Sink-only UFP, without PD. Look at Table 3-5 and Figure 4-5. In short:

Do what is specified by the MCU manufacturer for external pullup/downs on DP and DM, if any.

Not the answer you're looking for? Browse other questions tagged usb usb-c or ask your own question.

1
USB2.0 EH with USB type-C in accordance with USB specifications? Reasoning?
4
USB Type-C configuration necessary for battery charging only
1
USB-C How to detect an Audio Accessory with Charge Through
6
Can USB Type-C 2.0 upstream (device) connect its CC pins and share a pull-down?
0
Simplest adapter resistors to charge a phone while the phone is an OTG host
2
USB-C as power source and negotiation with USB 2.0 and 3.0
0
Correct way to wire USB 2.0 Type C connector?