How does voltage operate in an electric circuit regarding conservation of energy? [closed]

Ask Question
Asked 3 months ago
Active 3 months ago
Viewed 115 times
2
\$\begingroup\$
Closed. This question needs to be more focused. It is not currently accepting answers.

I hope you all are having a great day. I have some questions regarding the physics of a closed electric circuit on a microscopic level. Specifically, how energy operates and how voltage is "split" across resistive components. My professors always told me something along the lines of "the electrons can sense the resistance and know to split the voltage across all resistive components of the system." It doesn't make sense to me and I'd like some more clarification. Below is my concept of how electricity (charge carriers) work statically and dynamically. It also contains my understandings of specific terms, such as voltage. I'm putting it here in case there is a misconception resulting in me not understanding it.

Why do charge carriers not convert all their electric potential energy into other forms the instance they encounter a resistive force? Why is it that voltage is split evenly across equal resistances, such as a voltage divider? How come the supply voltage is always split across resistive components in a way that the return path is almost zero volts? It all seems so perfect, yet makes no sense to me.

In hindsight, I may just not know how energy conversion operates, but I would still like to know how it works in electric circuits. Any references or advice is greatly appreciated. Hope you all have a wonderful day.

In a static state, the charge carriers contain their electric potential energy.

I think this is where the misconception comes from: the charge carriers contain .. charge. The energy is embodied in the field.

Charge carriers move slowly but persistently for the same reason that pachinko balls keep falling even though they keep hitting pins. They lose their KE, but they can keep gaining energy from the gravitational potential available.

Why is it that voltage is split evenly across equal resistances, such as a voltage divider? How come the supply voltage is always split across resistive components in a way that the return path is almost zero volts?

The short answer is that the field redistributes itself along the current path. The aggregate field is made up of the combination of the field of all the charge carriers, with the field at the terminals of the power source. Remember that voltage numbers are always relative to a reference point, not absolute; there is no "absolute zero voltage".

Edit: see also Is voltage the speed of electrons?

Why do charge carriers not convert all their electric potential energy into other forms the instance they encounter a resistive force?

How come the supply voltage is always split across resistive components in a way that the return path is almost zero volts?

The term "return path" is a bit vague to me. Perhaps you mean the point in the circuit that you've labelled as zero volts (say the lowest potential in the divider chain), or the point where the electrons (as opposed to positive charges assumed in the "conventional current" model) have the least potential energy. Either way, the "split", or "sharing" of potential differences across the various elements in the divider chain do not "almost" exactly add up to the voltage source across them all, the sum is exact. Sure, this is a statistical average over many charges, and some individual charges may have behaved in a manner contrary to average behaviour, but on average, the potential energy lost by 1C of charges travelling from one point X of potential \$V_X\$ to point Y at \$V_Y\$ will be exactly \$V_X - V_Y\$. In other words, if a voltage source has a potential difference of exactly 10V, then its electric field is endowing all charges at one end of whatever "thing" it's connected across with 10 Joules per Coulomb more potential energy than charges at the other end.

Consequently, under the influence of this field, and in a typical tendency to move in a direction that minimises their potential energy (as all things do), charges move, and each Coulomb of charges that completes an entire journey through that thing will have imparted 10J of energy to that thing. Not almost, but exactly 10J.

In practice, when the electric field propelling those charges is removed (voltage source disconnected), their kinetic energy doesn't magically disappear. It is manifest as inductance, causing current to continue to flow (in spite of the absence of an explicitly applied electric field to propel them). Flow continues, and energy continues to be dissipated in the various elements of the circuit as the magnetic field collapses, and the charges decelerate to a halt.

Why is it that voltage is split evenly across equal resistances, such as a voltage divider?

If you measure +110 volts at point X and +105 volts at Y, you are simply making an observation that each electron at Y (being negatively charged) has \$110eV - 105eV = 5eV\$ more potential energy than an electron found at X.

Take for example a conductor that consists of a single length, say 1m, of uniformly resistive material, that is 1Ω per centimetre. You measure 5V of potential difference between the two ends (points X and Y), meaning that each electron that enters the conductor at Y has 5eV more potential energy than it will have when it emerges at X. It's not difficult to see intuitively that at the 50cm half-way point, it must have already "expended" half of its potential energy as heat, and if you measured the potential at that half-way point, you would be measuring its remaining potential energy, which must be 2.5eV less than it had at Y, and 2.5eV more than it will have when it completes the journey to X. A voltmeter will measure that energy as a 2.5V potential difference from the centre point to either end.

Now when you consider this length of conductor to be a set of 100 series-connected lengths of 1cm, each being a resistor of 1Ω, it's clear how the potential at the junction of each pair of resistors must be \$\frac{5V}{100}\$ different from the previous junction. This is the principle of operation of the potentiometer used as a potential divider, where the wiper is simply "tapping off" the potential at some arbitrary point along an chain of tiny resistors.

Each unit of resistance traversed by a charge on its way through the medium "costs" the charge some of its potential energy, the same amount for each identical unit of resistance. That amount is related to electrical current, of course, but current is the same along the entire length, by Kirchhoff's Current Law.

You could view the chain of 100 1cm-lengths as two units of 50Ω each. The charge must lose the same amount of potential energy in traversing each unit, and consequently must have lost half of it when it reaches the junction of the two units. Alternatively, consider the chain as two units of 25Ω and 75Ω, one unit having three times the resistance of the other. In that scenario, each charge first traversing the 25Ω section will lose one quarter of its potential energy, and the remaining three-quarters will be lost while traversing the 75Ω section. Measurements of potential difference across these two sections will reflect that ratio of 1:3.

We need only two simple assumptions for current and voltage within a loop.

Neither current or voltage is lost or increased within a loop. 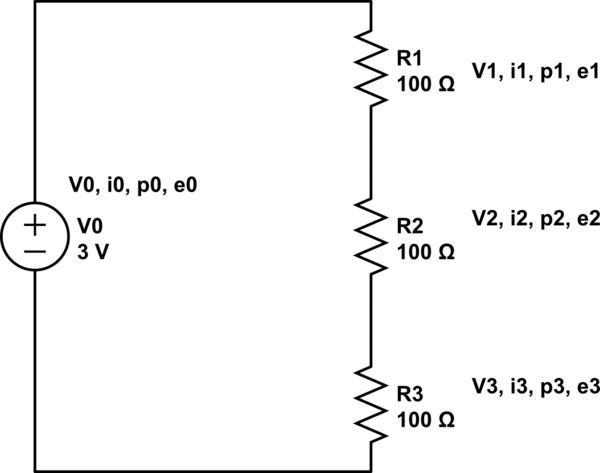 The currents through all resistors and the voltage source are equal. i0 = i1 = i2 = i3

All connections with wires are perfect, the voltage drop is zero. All insulations are perfect, no current flows between unconnected terminals. The behavior of equal resistors is the same.

Now to the energy conservation. If we multiply voltage with current to get the power:

So all power from the voltage source is consumed by the resistors.

Energy is the product of power and time:

So no energy is added or lost, energy conservation it true.

Not the answer you're looking for? Browse other questions tagged voltage energy or ask your own question.

26
Is voltage the speed of electrons?

2
How is energy consumed in a PN junction?
1
Energy direction in an electronic circuit
1
Why doesn't an electric charge use up all its potential energy travelling from positive to negative terminal?
0
How can a battery have electric potential?
1
Confusion about relationship between energy per coulomb, and the amount of coulombs in current
0
What exactly is electric potential (what's wrong with my picture of it)?
2
Where is the electric field in an \$LC\$ circuit?