How to find Thevenin equivalent resistance with dependent sources? 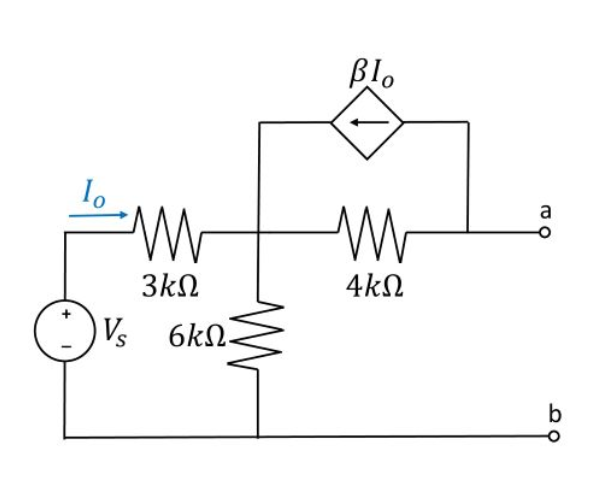 For this problem, Vs and Io are not given. Beta is equal to 8.

I want to learn how to find the Thevenin equivalent resistance with respect to terminals a and b. The correct answer is 27.33 kilo-ohms, but for the life of me, I can not figure out why.

I've tried disabling the independent voltage source and supplying a test voltage (Vt) between terminals a and b, as well as trying to apply a test current between a and b.

I then tried to leave the sources alone, and instead tried to find the open circuit voltage at the node next to terminal a, and tried to find the short circuit current between the terminals. However, I just keep ending up with too many variables and too few equations to work with. In class we did a similar example, except in that case, the source voltage was given to us.

Any help is appreciated.

EDIT: I ended up just assigning the source voltage to be 1 volt. If the Thevenin resistance is not dependent on sources, then I should just be able to put any real, nonzero value for the source.

This method worked and I received the right answer, but I also considered one of the comments that said to basically leave both the open-circuit voltage and short circuit current in terms of the source voltage, which should go away when looking for the final answer for equivalent Thevenin resistance.