We are going to build a telegraph which can communicate to an other telegraph. One of our communication systems exists out of a bell. The idea is that the sender can press a button and the receiver will hear one single ping. This bell will be operated by an electromagnet. We also want to send a few pings after each other.

There are two features I would like to implement. I want to add a capacitor discharge unit to power the coil with as purpose not drawing too much current from the 12 V line. (we would see LEDs flicker)

The CDU on it's own can power the coil. But if one is too send three pings, he might deplete the CDU too fast if hold the button too long. And the hammer might be touching the bell too long

For the second feature I would like to add a capacitor in the receiving line to let the button switch cause a pulse which can trigger an opto coupler. 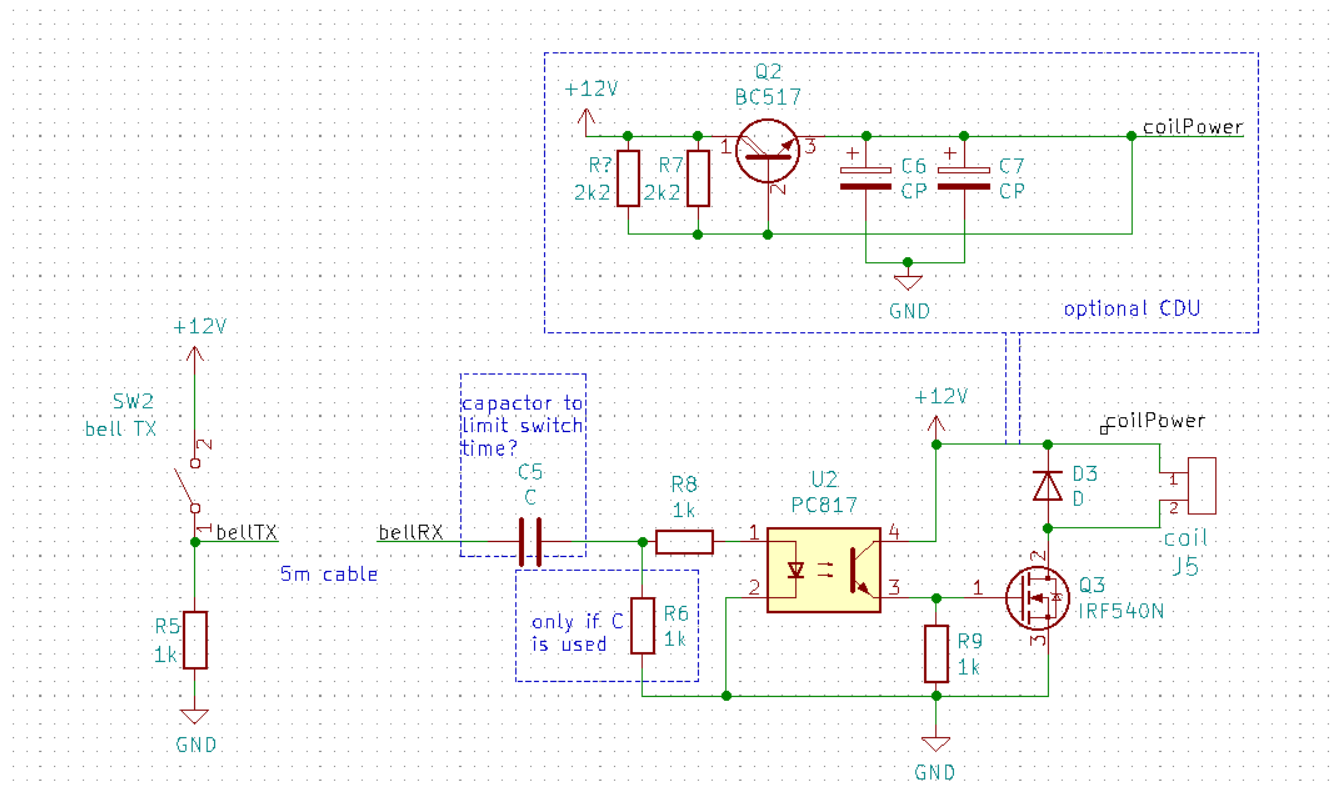 The operation in this circuit in order: One presses the button at bellTx, this causes a pulse on the receiver which triggers the optocoupler for a short time.

When the optocoupler is active, the MOSFET Q3 will be conducting which should sink the coil to ground.

When that happens the CDU should discharge the coil for as long as the pulse is active or the CDU still has energy.

What I want to know: Did I make any obvious mistakes in this circuit? I was not sure if I have to tie bellRX to ground via a resistor as well? How can I calculate the on time of the opto coupler when I press the the switch near bellTX

I do not yet know how long I should switch and how much energy I am going to need. I do can experiment with the opto coupler pulse, but I'd like to know how to calculate the resistor and capacitor values.

I figured it would also be a good idea to add a potentiometer somewhere in the pulse line. This would give me more control over the pulse time.

Did I make any obvious mistakes in this circuit? I was not sure if I have to tie bellRX to ground via a resistor as well? How can I calculate the on time of the opto coupler when I press the the switch near bellTX?

Sharp-eyed Andy has pointed out a flaw in charging the large reservoir capacitors. Q2 does nothing currently...the capacitors are charged via R7. Charging via these resistors is a simple, likely sufficient way to limit current from the +12V supply.

Does only one +12 V DC supply exist, feeding both transmit end and receive end? If so, the 5 m path from transmitter to receiver consists of three wires:

If two 12V supplies (one for transmit-side and the other for receive-side) are used, then only two wires are needed:

Calculating pulse width when using C5 involves a time constant calculation. Assuming C5 is discharged initially before the key is activated, charge current flows through C5, R8, and infra-red diode inside the opto-coupler, and back to GND.
Initial current flow will be about \$ {{12V - 1.5V}\over R8}\$. This current will activate the IRled inside the opto-coupler.
With key pressed, current will decay to zero with time constant mostly due to R8 and C5. \$ R_8 \times C_5\$, with units of ohms and farads yields time in units of seconds. The leading edge is quite fast, and initiates the bell's hammer. The trailing edge is slower...somewhat longer than one time-constant, and occurs when the phototransistor inside the opto-coupler decays its current so that the voltage across R9 falls through the MOSfet's threshold voltage (a few volts).

Recovery-time when the key is released involves a different current path through R6, and R5, discharging C5 to zero with time constant \$ (R_6+R_5)\times C_5\$.

This circuit barely meets requirements of the opto-coupler, which specifies absolute maximum reverse voltage across the IRdiode of 6 V. At the moment when the key is released, C5 is charged to 12V, and this is distributed evenly between R5 and R6, so the IR-diode momentarily sees a reverse-voltage of 6V (too close to maximum allowed).

Note that the "key" switch is assumed to be bounce-free. In practice, mechanical switches never open or close cleanly, with one edge, but bounce for a few milliseconds between the "open" and "closed" states.

As far as functionality is concerned, this circuit is overkill. While the desire to limit current drawn from the +12V source might be valid, it can be accomplished with simpler methods. An optocoupler isn't needed, nor is a MOSfet switch. Adding them might aid you in exploring their use in other circuits.

Not the answer you're looking for? Browse other questions tagged capacitor opto-isolator coil capacitor-charging or ask your own question.

1
Coil switching for resonance with an arduino controlled TRIAC
0
How and what kind of noise can an optoisolator filter?
5
Induced power supply noise on switch contact
0
What are the considerations for designing a capacitor bank?
0
Sensing doorbell directly off the secondary of the bell transformer, with an ESP
0
Can I change the voltage (12V) input into my optocoupler to 24 V?
1
Reverse engineer a TSOP 1730 IR Receiver Module?
0
Are my capacitors working properly or not?