How to simulate buffers (ABT) in ltspice

I would like to simulate this buffer in LTspice 74ABT244PW. I already got its model under the "support" section of the link. Now I'm new to LTspice and I had experience adding models before but how I did it in the past I first add a base component and make a directive from the external then link the base component to the directive. But now there is no buffer in the component list. 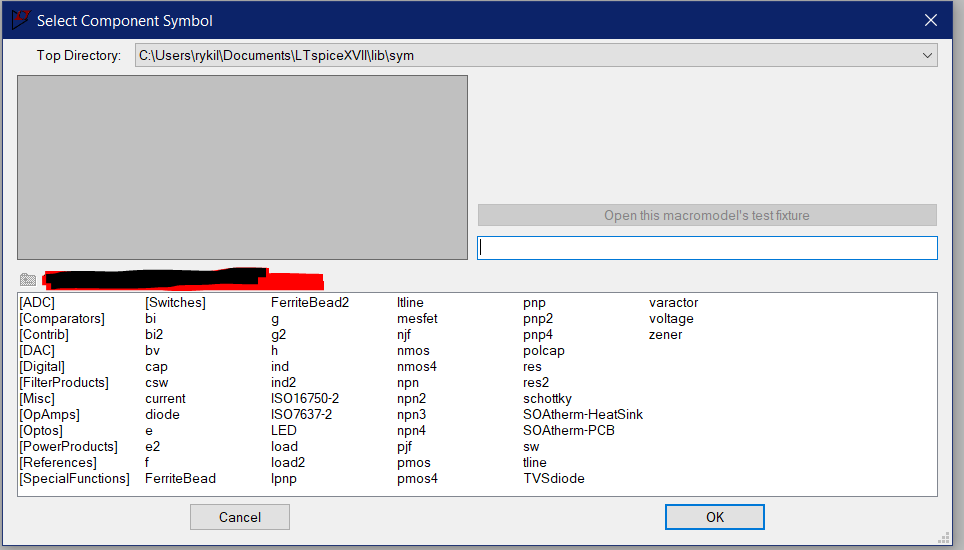 So how do I simulate that buffer component?

Their page has an archive with a SPICE model (not the IBIS one). In it there are two folders, HSpice and PSpice -- the latter is the one you're looking for, since LTspice is, mostly, PSpice compatible.

Inside there are a few library files (*.lib) containing lots of subcircuit definitions, many of them being used inside the actual model for the gate. It can look daunting, but there is also an abtps.cir file, which is a test circuit that can be readily opened up in LTspice, and simulated. It has no visual schematic because it's nothing but a netlist, but it does list the possible .lib combinations you need in order to build you own schematic, including some other files.

I don't know what and how you did it, but if you say you see no symbol it's because there is none included; you'll need to create one, yourself. Or autogenerate one, if it's to your liking.

One thing to notice: the test file (abtps.cir) uses a global net, $G_VCC, inside their subcircuits. Since you say you're new to this, a net name that starts with $G_ means it's global and is available at any level in a hierarchy, or subcircuits (i.e. here, $G_VCC used inside the libraries will be available at the "surface", or in the top level schematic); otherwise, labels are only available to the current level (i.e. a node named X inside a subcircuit will not be visible outside of it, and using the same X notation outside the subcircuit will not clash with the subcircuit one). I'm saying this to be careful when using that name.

So, for your case, here's one way to use the GUI to replicate their test file:

I haven't created any symbol, manually or autogenerated; instead, I used the readily available [Misc]/tetrode, because it already has 4 pins. If you look in their test circuit, the relevant line for the subcircuit is:

so any symbol with 4 pins will do. The order of the pins is input, output, positive supply, and negative supply -- that's how you see it now connected. But, since their test doesn't use a symbol (a netlist doesn't need one), you can circumvent that by adding a SPICE directive (S key) with the line that you see commented out, above (in blue text); that will substitute the need for a symbol.

Another difference is their usage of $G_VCC. I avoided that to show that it's not mandatory to use it, since my power supply uses, simply, VCC. But the availablility of $G_VCC remains, and if I were to connect something else with that node, it would interfere with the symbol -- so, be careful!

About the last difference would be the usage of the simulation card: .TRAN 500p 50n vs my .TRAN 50n. The former notation makes use of the legacy way of defining the simulation command (you can see it in the LTspice's help: LTspice > Dot Commands > .TRAN). In short, the 500p should add a hint to the solver about the timestep that should be used, but, as the manual says:

The first form is the traditional .tran SPICE command. Tstep is the plotting increment for the waveforms but is also used as an initial step-size guess. LTspice uses waveform compression, so this parameter is of little value and can be omitted or set to zero.

Emphasis mine. Therefore I used the latter form.

3
LTSpice: Silicon diode substitution improves Schottky clamp simulation
0
How to fit MAX941 macromodel to LTSpice "opamp2"?
7
Adding Photodiode to LTspice
8
Has LTspice been extended to support the modified-Chan, non-linear hysteretic model for coupled inductors (transformers)
1
Modeling a photomultiplier in LTspice with basic components
0
How can I change the standard .jft .bjt .dio .cap files in LT spice XVII
2
I am not able to edit existing LTspice directives; I always need to create new
2
LTspice darlington model