How do coupled combiners work?

I cannot seem to find this information anywhere.. basically my question is, how are the directional couplers used to combine power? Couplers pretty much take an input and split it into two different output ports, so this feels to me like they would just split power, and not combine.

Microwave101 talks about it briefly with no real explanation.. it just states " The coupled combiner seems simple enough, but each coupler needs a different coupling coefficient to be successful. "

Can someone please explain to me how the combining network is formed using directional couplers? I would like to know how things are connected.. which port of the coupler is connected to input and output of an amplifier? Is anything connected to an isolated port? 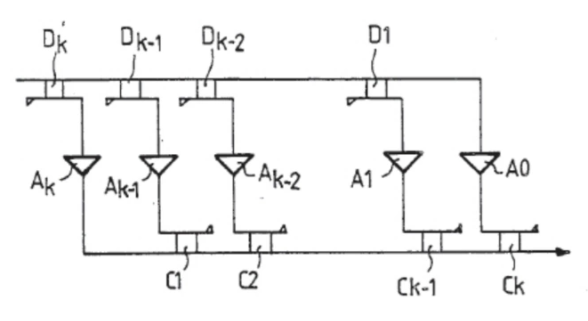 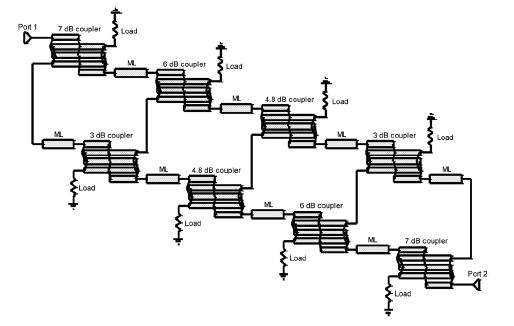 There are the examples. I am especially interested in understanding the diagram in the second image, which utilizes Lange couplers.

What you've illustrated is a Distributed Amplifier, a combination of couplers, amplifiers, and more couplers. This is usually done to allow low power amplifiers to be combined to produce a higher power.

All passive electronic networks, like couplers, are reciprocal. That is, you can pass the signals through in either direction.

When you use a coupler to split signals, then you automatically end up with the phase of the two outgoing signals in a specific relationship.

If you are going to use a coupler to combine signals, you need them in that phase relationship to combine additively. If you have them in a random phase, then some energy will likely end up in the load that is part of all splitter/combining couplers.

If you build a distributed amplifier, and the transmission phases of your amplifiers are matched, then the amplifier outputs will automatically be in the correct phase for additive combining.

In the second example, the couplers have different coupling coefficients, so that roughly the same power level passes into each amplifier. The input signal decreases as it passes down the main line, so a greater fraction has to be tapped off at each coupler to yield the same power output from each.

The fact that they are Lange couplers is just a detail of construction, some frequency ranges and construction methods lend themselves to particular types of coupler better than others. A Lange coupler allows a planar construction to deliver high coupling that a conventional edge-coupled coupler could not, in the face of realistic fabrication tolerances.

0
Any Way of Converting Several 2-Port S-Parameters Measurement to 4-Port S-Parameters
1
Unterminated RF Combiner Input Port
4
GPS splitter with 200Ω DC load and 50Ω RF impedance on all ports
0
RF Directional Coupler - definitions
1
Help interpreting a NASA design
3
Ensuring certain amplitude level of RF signal on a PCB board
1
How does this MMIC work?
5
How does this coupler work?
9
What is wrong with my 50Ω microstrip?
0
How does the TDA7265 (bridge amplifier) work?