When analyzing simple circuits to understand the theory of their operation, we often make use of the Heaviside step function, \$u(t)\$.

When we calculate a convolution integral, we must understand the time-reversed and delayed function \$u(t-\tau)\$.

The step function is one when it's argument is greater than or equal to zero, as the wiki page you linked to says.

When is this true? When

So really \$u(t-r)\$ is just a delay with respect to the variable t. There are some very good interactive tools for understanding this kind of stuff here. As you can see in the "Joy of Convolution" applet on the linked page, the step function is frequently used with respect to tau, in which case it is time-reversed as you mentioned.

Like Nick points out, it's a very simple function. Whenever \$t-\tau\$ is greater than zero, the value is 1, otherwise it's 0.

One more thing to point out though, is that when we use this function, we're usually calculating a convolution integral like 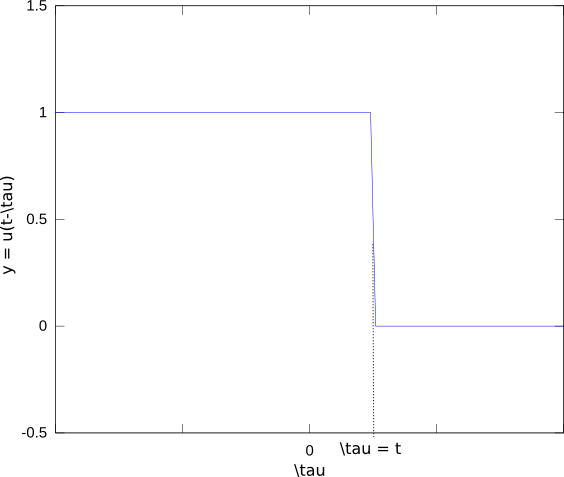 Not the answer you're looking for? Browse other questions tagged signal or ask your own question.

3
How to properly scale, time-reverse and shift a signal?
0
How to apply fourier transform to \$0.5^n u(n)\$
6
How is signal 'discarded'?
0
How to Clip The Negative Portion of a Signal?
0
How to measure the signalling speed of Gigabit optical ethernet?
0
How to calculate the speed of AC signal in different mediums?
1
Lionel Model Train Transformers: Request for explanations of how things inside work
1
Multiple Servo, Move when not powered on
0
Signal Theory paradox
1
Confused about the similarities between Fourier Series and Fourier Transform