How should I understand back-EMF in an inductor?

I have a circuit made of a MOSFET that pulls the lower side of an inductor to ground while the other side is connected to a DC voltage source as follows: 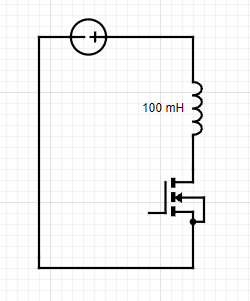 Then it is very simple to describe what's going to happen when the gate goes high.

Next the gate is discharged. Since this forces the current to go to 0 A in a very small time span, the EMF created by it according to equation above will be a single high voltage rectangular pulse for the same time span. Since this is back-EMF it is also a negative voltage.

But this is not what happens in simulation or the real world. Instead the current is driven to the exact negative value that it had ramped up to before and flows through the body diode. So the magnetic flux not only went to zero, but it now reached a negative peak.

How can this be explained?

If the MOSFET forces the current to 0 A, what forces it to its negative peak?

So the inductor gets demagnetized which is pretty clear since the current is driven to zero. What's causing the consequent magnetization, the inductor can't magnetize itself!

I'm nearly done with my bachelor, but this I still can't get my head through :P 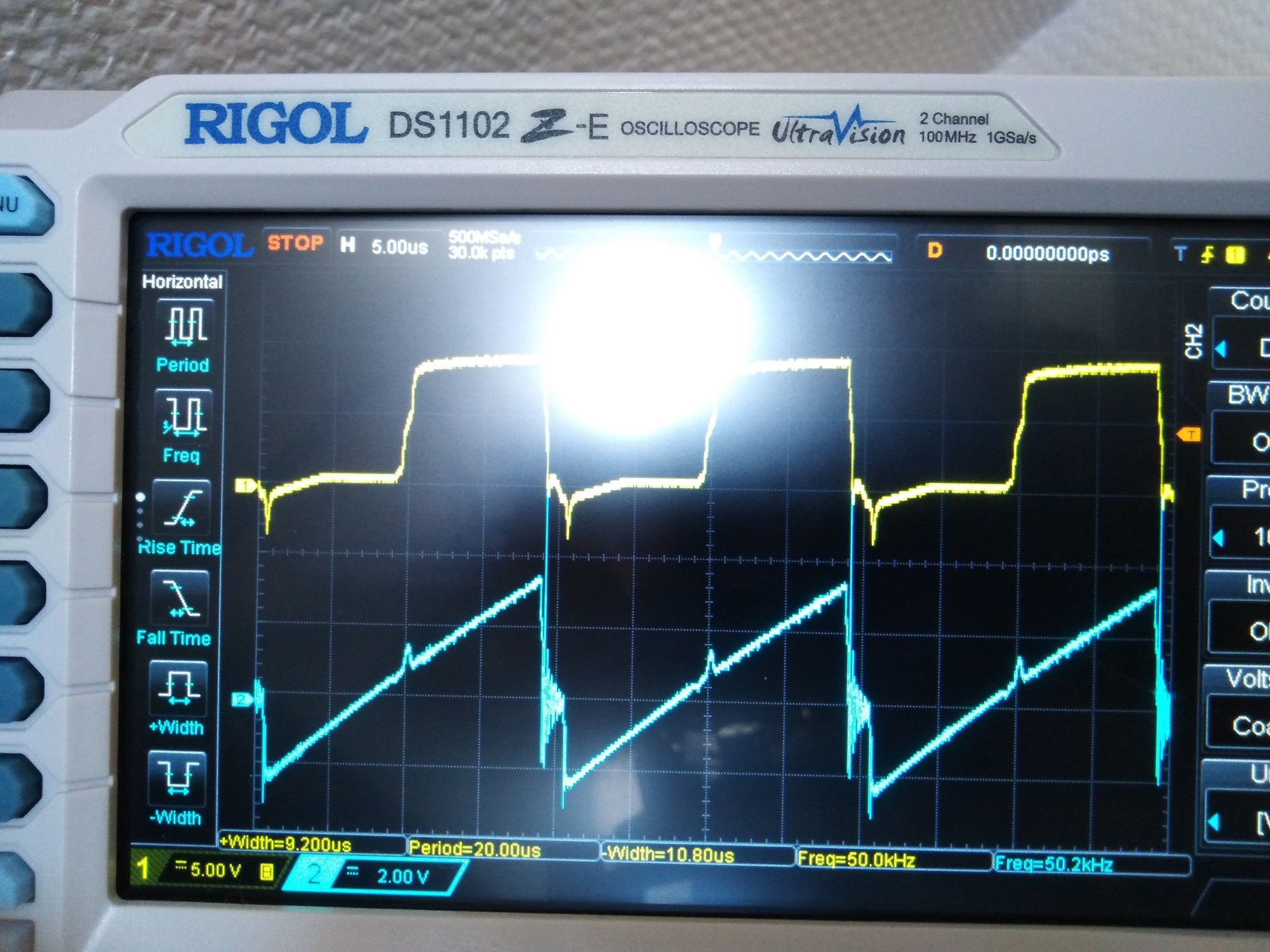 So this is the gate-source voltage driving the MOSFET and in blue the drain current through a 3 ohm resistor. This is the exact same setup as in simulation where the exact same thing happens: 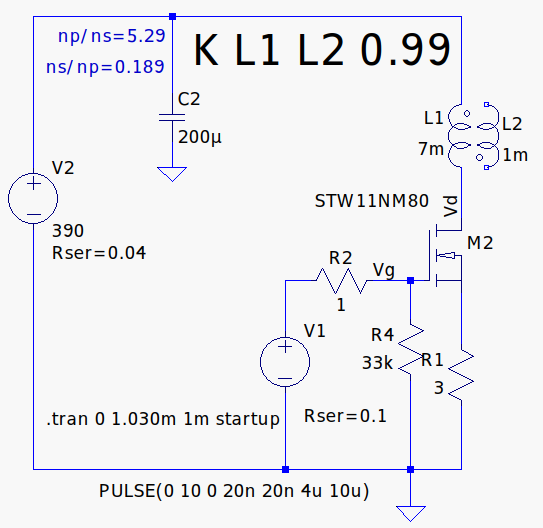 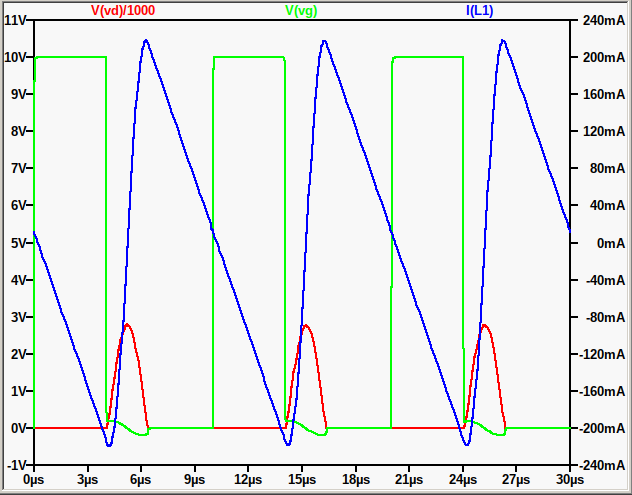 (the current is just inverted)

Here is the LTspice file if interested: One Transistor forward _basic

Thanks to @DKNguyen, the current can be mostly explained:

The current wave form is actually created by the parasitic drain-source capacitance (CDS) together with the body diode. When the MOSFET goes open, its CDS together with the inductor resonate in series while their peaks are decreasing:

When adding the body diode, the ringing is rectified and filtered giving the replica of the original current wave form:

Now the duty cycle can be adjusted to move them both together. I'm not sure why the slope equals the inductor slope though. There is more to this, but this answer seems satisfactory.

Big thanks to @DKNguyen and @devnull.

I reran the simulation with a 10 µH inductor and got the following:

which seems indicative of behaviour similar to reverse recovery in a diode, maybe the body diode itself, but I don't think the conditions are correct for that. I think it's the MOSFET itself...though the same thing also appears with a BJT. That said, I'm a little suspicious that the slope matches the inductor charge slope, but I guess it's not surprising it matches since it is a current spike that must flow through the inductor regardless even if it is the transistor that is responsible.

It appears you were unlucky in that you chose a frequency and inductance too high so the current never had enough time to build up and stayed at a magnitude similar to the reverse recovery spike and everything bled together. Here is your simulation at 7 mH with a much lower frequency:

I did just simulate using switches instead of transistors and it does not exhibit an undershoot. The model for the switch assigned to the "SW" component was:

via the Spice directive, as per LTspice: Voltage Controlled Switches.

With 10 µH, adding 200 pF Cds and Cgs to the switch produces the following waveform which roughly resembles what you have so maybe it's not reverse recovery anything, but just parasitic capacitances, but it doesn't look like ringing as much as I thought it would: 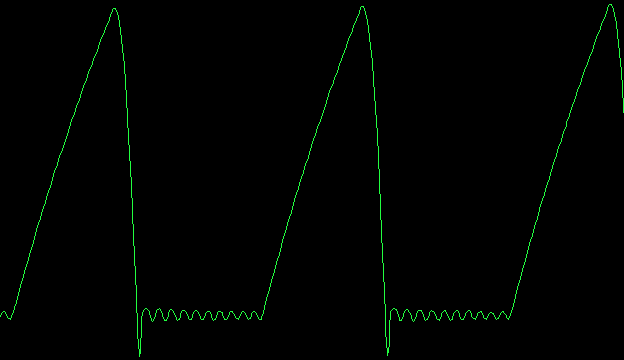 An inductor has two modes: As a load, when a source is pumping current through it, it stores energy in its magnetic field. While this happens, the inductor voltage resists the source voltage. This is the back-EMF. In your posted circuit, that is when the switch is closed, the current flows clockwise and the inductor voltage is + on top, - on bottom.

The MOSFET tries to open, but the collapsing magnetic field in the inductor generates whatever voltage is necessary to punch through in order to keep current at the remaining level. There is only finite energy so it can’t keep this up forever and current decreases as energy runs out. But the higher the impedance present, the higher the voltage required, the more power is required, the faster the energy in the magnetic field is expended, and the faster the current falls to zero. The inductor forces the MOSFET to enter breakdown between source-drain in the above circuit to keep current flowing.

At no point does current reverse and flow counter clockwise. The inductor voltage is the only thing that reverses when the inductor goes from having it's magnetic field built up/charged to having its magnetic field collapse/expended, but the current continues clockwise the entire time.

Does that clear things up?

The current is much like a moving freight train. You can have the engine producing a force that pushes the train along. But throw up a wall to try and stop the train and that train will produce an enormous force via its momentum and inertia to smash through that wall to try and keep the train going at the same speed. It does this even if you cut the engine and it does this even if the force produce by the engine was not enough to push through the wall on its own (i.e. starting from zero speed and just accelerating up against the wall), similar to how the flyback voltage can be much higher than the source voltage.

Inductors want to keep the current that is going through them constant at all cost (whether 0A, 100A etc.). When someone is trying to change the current, the inductor will inject a voltage to try and keep the current going. The faster you change the current, the higher the voltage spike becomes. If you have a free-wheeling diode, it does not take much voltage for the inductor to keep things going. The flux will die out slowly and current easily continues to go through the inductor, slowly dying out. Without this diode, the inductor is getting more and more desperate building up a higher and higher voltage. This is what an ignition coil does. The polarity depends on which direction current is getting changed. If the external factor is trying to increase the current, then the voltage getting induced by the coil is working against the power supply, trying to keep current the same. On the other hand if you are trying to decrease current (ex. turn off switch) then the inductor builds up a voltage to work with your power supply. I hope this makes sense. Btw. the capacitor does the opposite. It always wants to keep the voltage the same and will "inject" a current trying to keep it so.

Maybe this is not the solution to the problem, but it is worth noting that if we add a capacitor to the parasitic DS capacitance, the current doesn't change direction while Vgs is pulsing and the natural frequency changes considerably after: 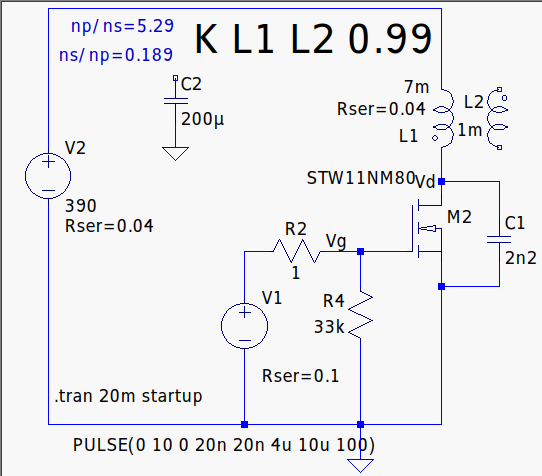 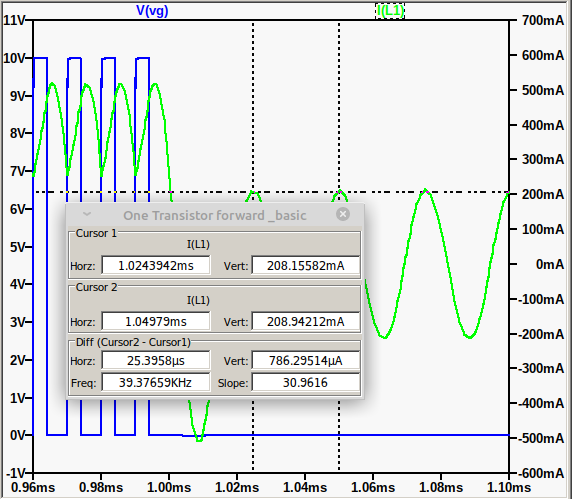 Not the answer you're looking for? Browse other questions tagged mosfet current inductor switching emf or ask your own question.

4
How to Power a Tank Circuit with Mosfet without the Inductor Undesireably Triggering the Mosfet
1
MOSFET source to drain Current
15
Back-to-back MOSFETs: common source vs common drain?
3
Reducing effect of MOSFET parasitic capacitance with resistor in series with gate
3
Purpose of MOSFET in this circuit
0
Effect of drain inductance on MOSFET turn off
1
How do these FET's work back to back?
0
How Dual MOSFETs are used in Power Management or Protection circuits?
3
Is it a problem to connect a controlled current source in parallel to a voltage source?