Slide says the above thing but I am not really able to grasp this. How can we send more data in digital than analog. And what kind of circuit are we talking about here?

http://home.ubalt.edu/abento/650/physicaldlink/tsld005.htm here is the slide which says so. I don't think this is unreliable source tbh. 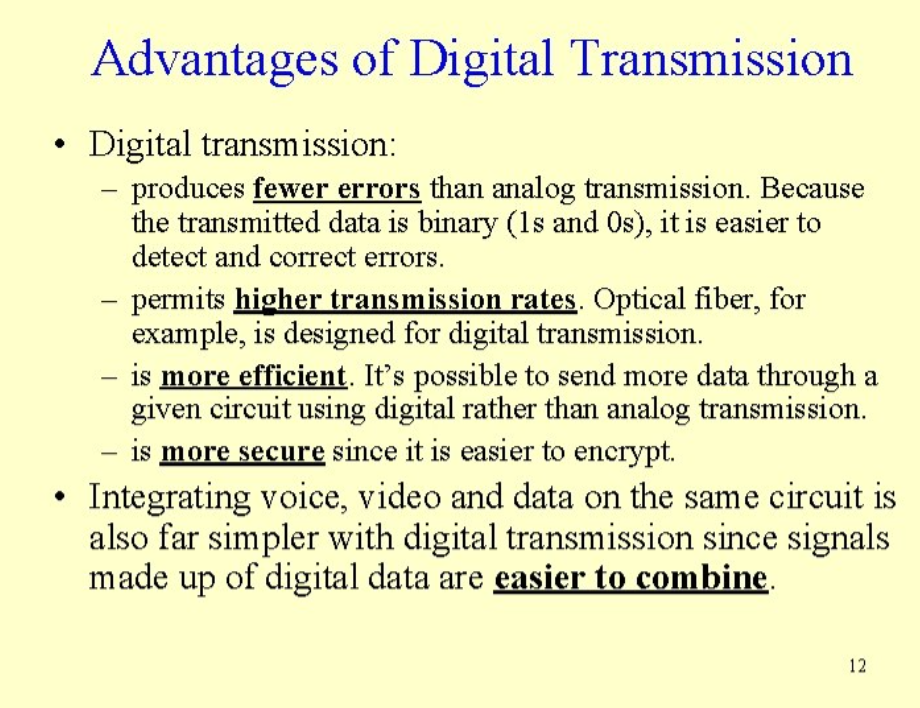 As a communications engineer (and someone dealing with a lot more digital signal processing than is good), this slides ... weak to wrong.

We have to be very clear here: when we say "data", we typically mean things that are already digital to begin with. Now, of course, some kind of digital data has an analog equivalent – for example, an MP3 file has the equivalent "analog sound". You could alternatively transmit that as an analogue signal. But how does an analog spreadsheet, or computer executable binary, look like? So, honestly, this slides premise is kind of from the 1960s...

So, all these comparisons only make sense for things that can be represented in both digital and analog signalling.

Since you say "circuit", I'm assuming you're referring to telephone; the third slide does seem to agree. Anyway, there's many other things, and this slideset very clearly ignores them without telling you.

So, for the rest of this, we talk about speech transported over 1970's telephone networks. None of this is relevant to any modern networks.

Not a good source, your slideset. Maybe learn from something else?

Because the transmitted data is binary (1s and 0s)

it is easier to detect and correct errors

is more efficient. It's possible to send more data through a given circuit using digital rather than analog transmission.

The reason this is more efficient for voice is that we have excellent ways of encoding voice as digital signal, and it was hard back in the days to which the slide set allures to multiplex many analog voice channels onto one cable, so you could only have so many telephone calls on a single trunking line, but with digital audio/PCM you can interleave really easily. That makes it more efficient.

Anyway, these discussions are over: there's not been an analog telephone multiplex built in easily 30 years...

The question and the slide deck are purple monkey dishwasher.

‘Digital’ transmission, if anything, is less efficient than analog in terms of spectrum usage for conveying an uncompressed baseband signal. Compare for example sending 3kHz audio vs. 64kbps digital for telephony, which requires at least 32KHz bandwidth. Clearly, the baseband audio is more efficient.

On the other hand, careful encoding of digital data into analog allows a modem to send data at 64kbps over that same 3kHz POTS line.

What’s going on? Every communications medium has an information carrying capacity determined by its bandwidth and its signal/noise ratio. This is called the Shannon Limit. The equation is as follows:

So through the magic of adaptive DSP processing, the modem squeezes the maximum information throughput from that POTS line, getting pretty close to its Shannon limit.

Great, so we’re thinking about information and not getting stuck on the false analog vs. digital dichotomy posed by this naïve slide deck. Now what?

Working in digital allows us more degrees of freedom to analyze the information and remove redundancy prior to placing it on the line. This is the process of compression. Then whatever digital + analog method used to encode the information can use a lower symbol rate.

So we could take that 3kHz voice, digitize it, compress it using something like G.729, then re-encode with a modem and use perhaps 1/4 the bandwidth of the POTS line. Or, we could carry 4 audio streams on the same line.

Another more aggressive example is MPEG-2 video encoding which compresses video data about 200:1, allowing 1080i HD video (about 1Gbit/s) to be transmitted in the same bandwidth as a 6MHz legacy analog video channel.

Neither would be possible without some way of managing the entropy of the data stream through compression.

This is a very interesting question, and I particularly enjoyed reading the comments and see the difference between an academic's attempt to "simplify" a networking concept versus the accurate interpretation of the slide's words by practitioners.

So here is the situation - what the slide is trying to say, clearly not very successfully, is that when using digital transmission, in general, it is "easier" to send data due to noise tolerance. Because of that, all kinds of improvements can be made, hence making digital transmission more common than analog.

Specifically, if your line has 1V noise and your "1" is 3V and your "0" is 0V, you can send 8 bits and convey a number. Each bit will be "noisy", so if the first bit is 1, and the value is 2.6V, it is still a "1". So as long as your transition from 0 to 1 is "sharp", the transmitted result will be exactly what you sent. On the other hand, if you use the analog value to convey the same range of information, you are subject to the full noise in the line and you will never get the identical result.

Because of this simple fact, you can increase bandwidth but just flipping bits faster, as that is easier than cleaning the line. And you can do all kinds of other improvements to the transmission line, such as encryption, bit correction, etc.

But there are tons of exceptions and for every example, one can find a counter-example of a situation where the analog transmission would work better. And if you want to be strict, all transmission is analog, signals are continuous voltages. However, you have to draw the line at some level of abstraction so you let the lowest layer take care of how to reliably convey the "0" and "1", the deal with the rest of the transmission as digital, thus reaping the benefits.

Not the answer you're looking for? Browse other questions tagged analog signal design transmission or ask your own question.

2
Analog vs digital wireless newbie questions
12
How to add a controlled amount of jitter to a signal
9
Why does more bandwidth mean higher bit rate in digital transmission?
0
External Power Supply Grounding Scheme
0
Switch between two serial ports
0
Digital filtering after analog to digital conversion (ADC)
4
Why is an analog circuit more susceptible to noise than a digital one?