Why is the bias input current of an op amp a constant value?

I read this text on op amp input bias current. It says:

Often the input bias current is modeled by this kind of model: 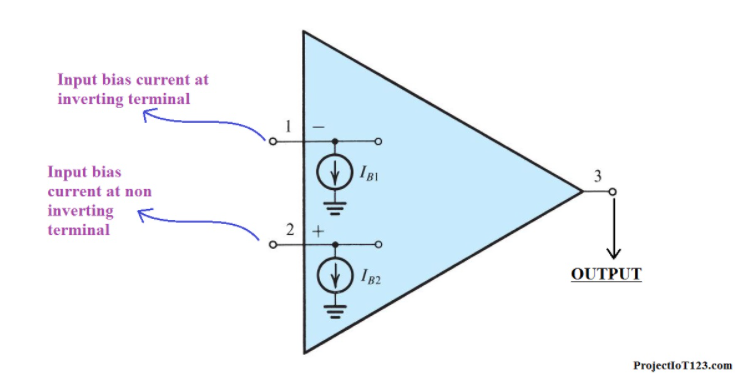 The bias current of an op amp is mentioned usually in the datasheet. But why is it constant? If the bias current is connected to the base-emitter junction of a transistor inside the op amp, shouldn't its value be dependent on the input voltage? Why can it be modeled in a circuit using a constant current source?

If you think of the simplified input circuit of a bipolar-input op-amp with a differential pair- the transistors are operated at fairly constant and equal collector currents at balance, so the base currents tend to be fairly constant. (image from here) 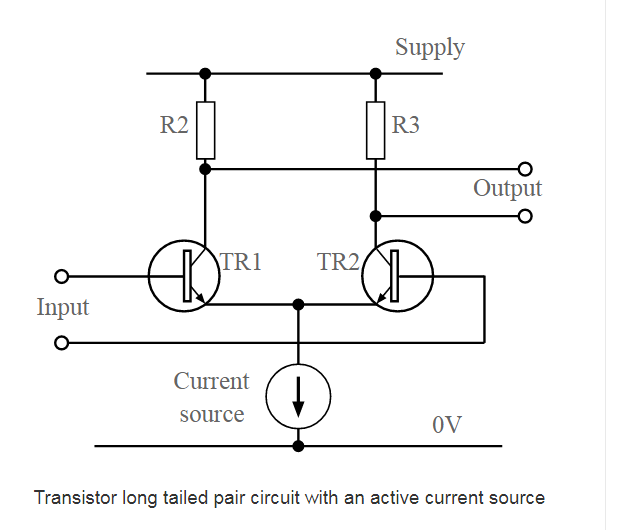 CMOS and JFET input op-amps are another matter- the input bias current consists of leakages in input transistors and protection networks so you would expect them to vary with input CM voltage.

Getting back the bipolar types, a real op-amp such as the LT1013 has characteristics like this:

As you can see the bias current varies by about 2:1 with common mode voltage typically (+5V supply), and varies significantly with temperature as well. So they're not really all that constant.

Take an older "precision" op-amp design, the LM725 which actually has something close to the simple textbook differential pair with current source as the front end (and no bias current compensation): 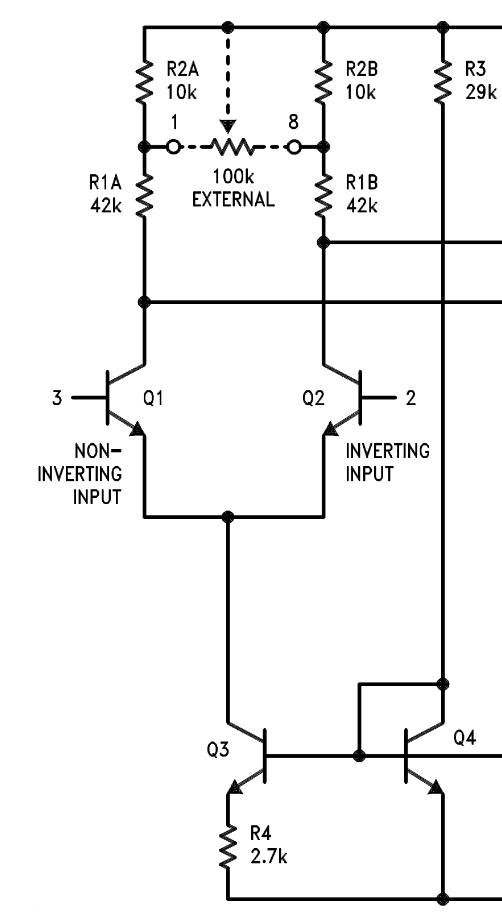 You can see that the input bias current varies by 4:1 over a wide temperature range. 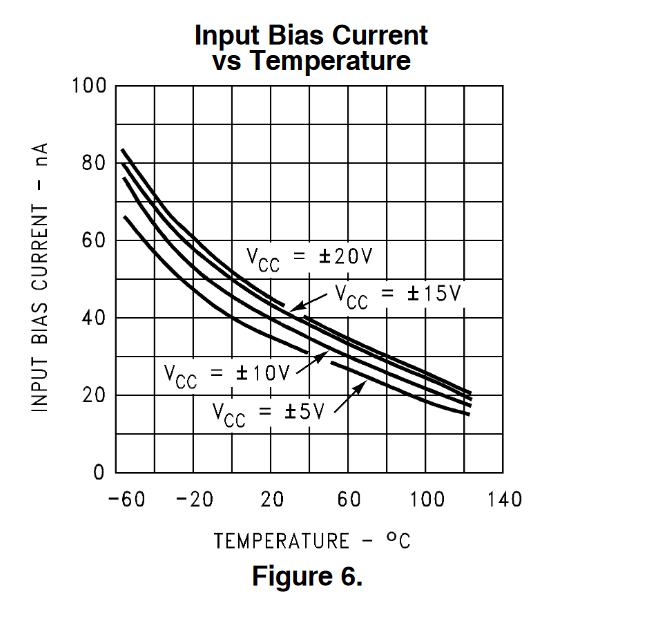 You refer in particular to the LM741- here is the input bias current as a function of temperature for the Fairchild uA741 from the Nov 1970 datasheet: 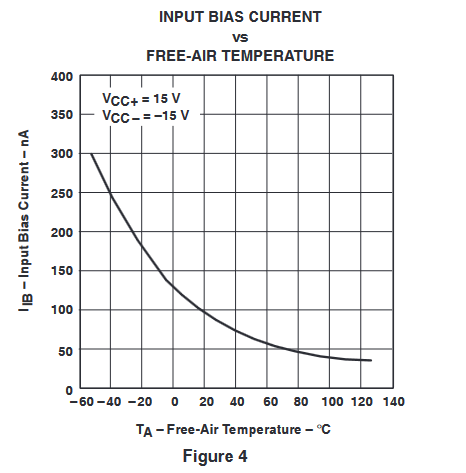 Maybe 8:1 change over temperature. Note also that if you unbalance the op-amp (say the output saturates) then the input bias current of a given input of a bipolar input op-amp will change significantly.

Rail-to-rail input bipolar-input op-amps have even more "interesting" characteristics in that the bias current typically changes sign depending on common mode voltage. The shenanigans look like this for the LT1218: 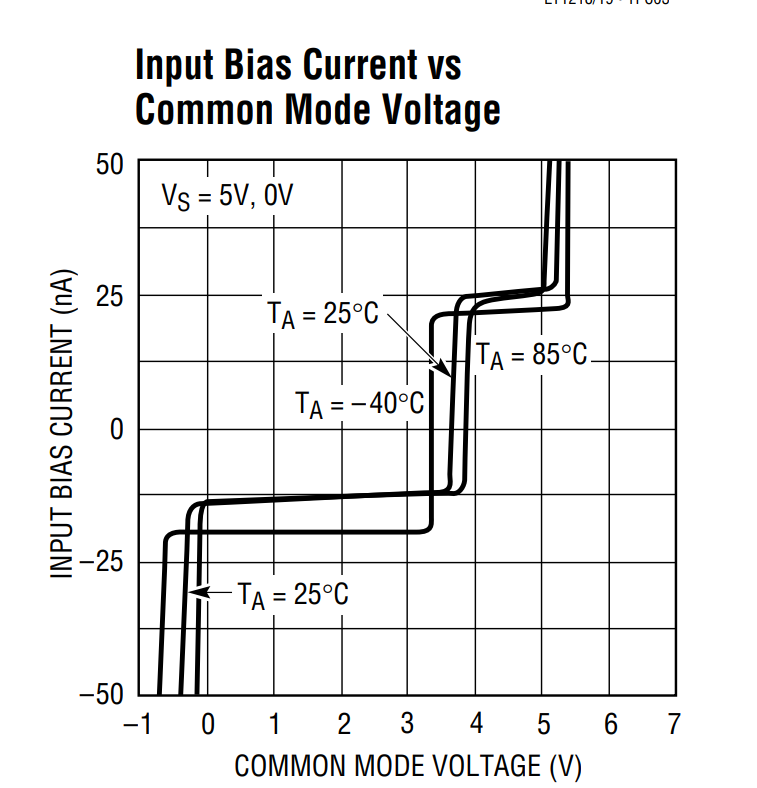 Compare with the much cheaper LM358 where the current changes only about 20% typically with CM voltage, and in a smooth manner.

P.S. do not take the "simplified" schematics without a large grain of salt. Even the venerable LM358 has a more sophisticated current source arrangement than shown (3 current paths rather than one), which has a large effect on the bias current change with differential input voltage.

A typical structure of an op amp input looks like a differential pair; a simplified model of how one generally looks is shown below: 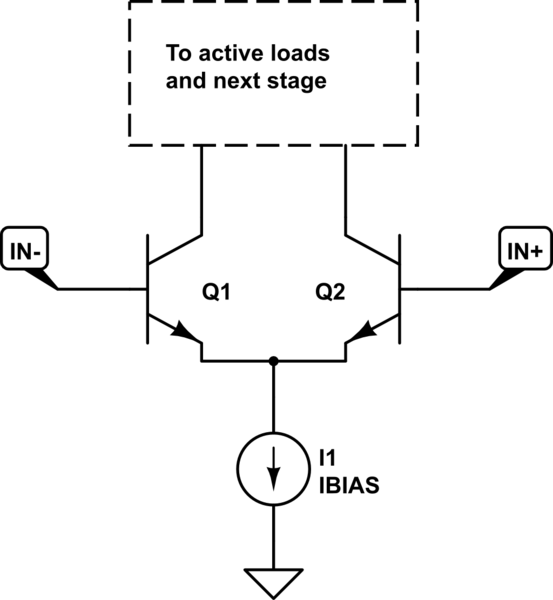 The two transistors Q1 and Q2 are laid out carefully for optimal matching using techniques like common-centroid, interdigitation, etc - their saturation current, beta, and other relevant parameters are held as close to identical as possible.

The differential pair bias current is split equally across the two branches, and is constant1 as a result of the construction of the differential pair; this means that as long as the two transistors remain in their forward-active mode, each will draw a base current of \$I_{BIAS}/2\beta\$.

It's worth noting that the input bias current isn't necessarily sunk into the chip; it may be sourced from the chip, e.g. in the case of a PNP differential pair.

Of course, as we relax the simplfications, we lose the constant behavior. Non-idealities of the tail current source (or in the worst case, a pseudodifferential pair or a common tail resistor) will lead to a varying current, and more advanced input structures can also make the current vary with common-mode voltage.

As a result, designers should generally assume that the bias current is an unknown value up to the datasheet guarantee (a worst-case value). By also assuming that the input bias is matched across both sides, it's then easy to null the effect of the input bias current by ensuring that both input pins "see" the same driving impedance. My existing answer shows an example of how this analysis and design trick can be applied to an entire op amp circuit used for gain.

The LM358 datasheet does note that the bias current is essentially constant - of course it will vary based on temperature and supply voltage etc, but assuming they are constant and the input stage is ideal, the current is constant.

That is because the emitter is biased with a constant current source or sink (depending on if the input is PNP or NPN stage) which in theory has infinite source impedance, so emitter bias current will be constant and thus the base input current will also be constant, independent of the base voltage.

Of course with real world components and power supplies, the bias current will be approximately constant when the input voltage is within some safe limits.

Bipolar input current polarity depend on whether input transistors are PNP or NPN.

Most often, "-in" and "+in" pins go to differential pair consisting of two identical transistors...their emitters are fed with a constant current source. When the opamp is running linearly, each differential transistor conducts half the current source's current. Since both these transistors have identical current gain, their base current is the same, and is constant, just as emitter current is constant.
Be aware that bias current can change once the opamp exits from its linear range.

The OP's image is misleading. Bias currents are shown going to "earth". They actually return not to earth, but to one of the DC supply pins (often called Vcc, Vee)

Not the answer you're looking for? Browse other questions tagged operational-amplifier biasing or ask your own question.

4
Define input current of Op-Amp
0
Confusion with understanding the fixed bias circuit
1
Where do input bias currents flow and what voltage drops do they create?
0
Modeling input bias current in op amp
0
Explanation about op-amp bias resistor and bootstrapping
2
Why is the output of an Op-Amp given by the open loop gain multiplied by the input differential voltage