Background: I'm attempting to control an ATX power supply. I want to read its 5V power good signal and send it to a 3V3 Raspberry Pi Pico GPIO input, and simultaneously power an indicator LED.

I think I've worked out the individual components of this circuit but I'm having trouble putting it all together.

From the ATX spec: 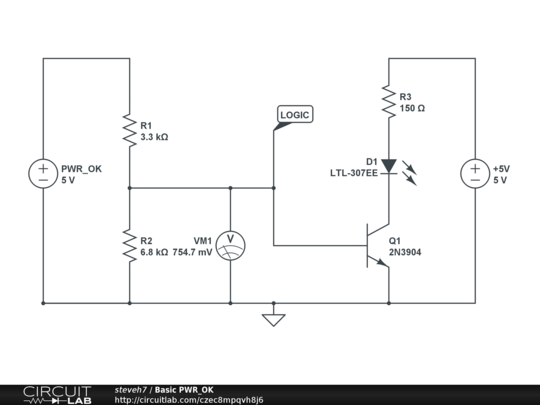 The simulator reports 750mV at LOGIC, which isn't going to work. Playing around suggested a digital buffer might be appropriate. I have no real idea, but this provides 2.9V to LOGIC, which is sufficient: 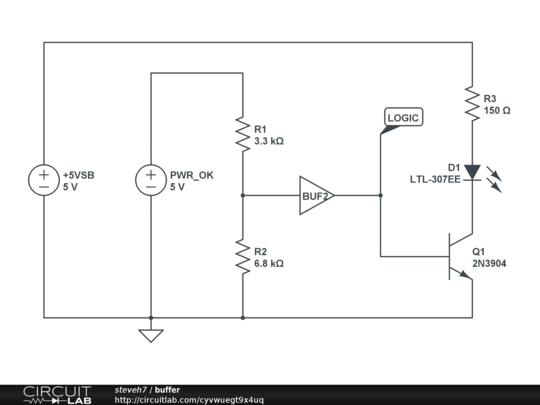 Changing the buffer for another resistor and dropping the values by 2 orders of magnitude gets me closer to the right voltage but I'm really just guessing at this point.

You should consider using an N channel MOSFET instead of a BJT to drive the LED. MOSFET gates have much higher impedance than a BJT base and would therefore moot concerns of the impedance having some impact on the level of the output of the divider.

I suggest feeding the PG signal into a logic buffer. As the PG signal does not make much sense without the power supply being turned on, a typical motherboard has a pull-up resistor of say 4k7 ohms from PG pin to 5V (not the SB5V). The logic buffer can be powered from the SB5V, and you can decide if a buffer with Schmitt trigger input is beneficial and whether you like an inverting buffer. The buffer output is strong enough to drive a LED with 5V and a voltage divider to drop the output to 3.3V for Raspberry Pi 3.3V input, or the buffer could be one with open drain output so you can use built-it pull-up resistor on Raspberry Pi. Simply a transistor would also do in place of logic gate, just decide where the output LED or pull-up resistor would go to, 5VSB, 5V, 3.3V, or the Raspberry Pi 3.3V. If you use a buffer, and power it with 3.3V (from Rpi or 3.3V or from 5VSB via 3.3V regulator), make sure the buffer input can tolerate 5V. Also make sure the buffer won't try to push 3.3V into GPIO pins of unpowered Raspberry Pi.

Fundamentally, you have the right concept here: take the 5V logic, step it down, and fan it out to the inputs of your circuits of interest. However, there are a couple technical details getting in the way of your implementation. I will try to summarize below.

For this application, I would recommend looking for a type of device called a level shifter or digital transceiver. It essentially would replace the voltage divider + buffer portion of your circuit in the second image you shared. These ICs are designed for this exact application, where you have an input and an output device that don’t share the same logic levels, or even logic styles. Essentially you hook up the 5V power supply to VCCA pin of the level shifter, the Pi’s 3.3V power supply to the VCCB pin of the level translator, and then you can connect your ATX pin to the A-input pin of the level translator and the pi GPIO pin to the B-output. This will ensure that the high and low logic voltages will be in the correct range for the Pi, and referencing the same high and low supplies as the pi. The CD4504B may be a good device for you to consider, although it’s quite old and doesn’t have a very user friendly data sheet. There are a lot of newer ones out there these days, the only catch being most of them are in surface mount packages.

Lastly, addressing the LED driver portion, once you’ve included the base series resistor, you could use a level translator with two or more channels, hook up the ATX signal to two A-input channels, then drive the Pi with one B-side output channel, and drive the LED driver with the other b-side channel. This would be consider better practice as you’re sort of isolating the BJT current from the Pi GPIO current. That way any excessive current draw from the BJT wouldn’t effect the signal being received by the pi GPIO pin.

Not the answer you're looking for? Browse other questions tagged digital-logic raspberry-pi atx or ask your own question.