What colors is an RGB LED actually able to emit? Obviously, it's not able to represent the whole spectrum of RGB (it will not be black, or brown). 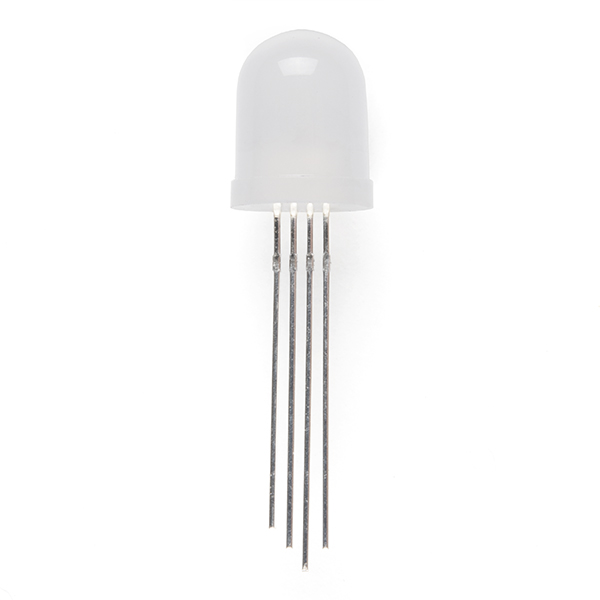 I found the following characteristics at https://www.analog.com/en/technical-articles/control-color-of-led-stage-and-architectural-lighting-easy-accurate-13-bit-color.html: 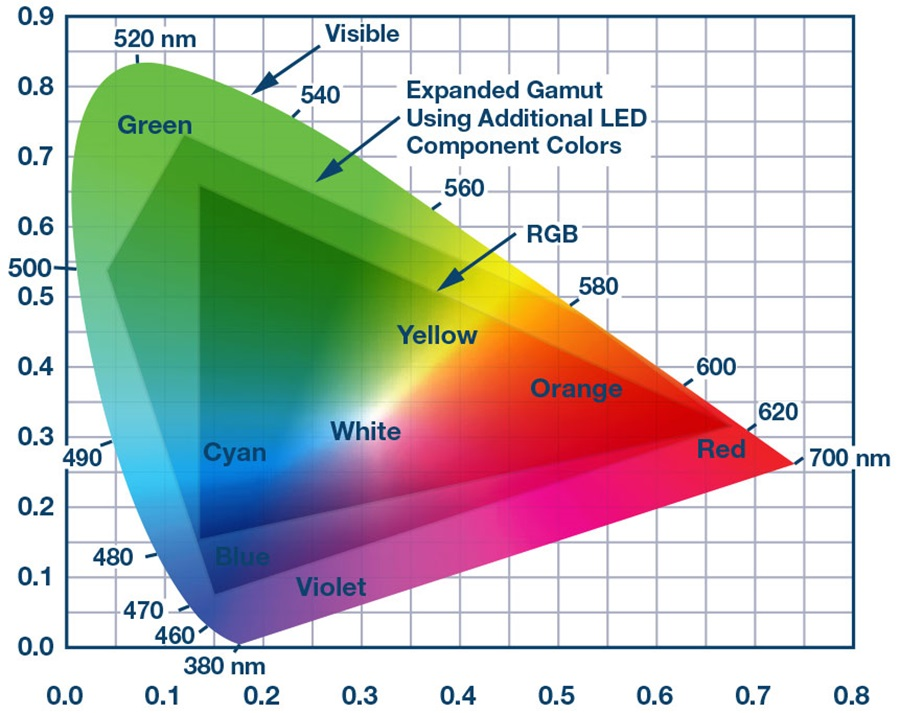 Is it true that a single LED is able to emit colors as the smallest triangle on the illustration above shows?

If this is the case, how does LED monitor display colors like brown?

The simplest answer is… in the LED datasheet! Usually they give the emission spectrum of the single channels and from it you could work out the useful gamut of the led.

You might consider asking for binned parts if you really need consistence in your device emission.

An RGB LED cannot emit light at the yellow wavelength (around 590 nm). But it can emit a mixture of green and red light which looks exactly the same as yellow light to humans.

This is because our eyes do not sample the entire spectrum. We are trichromats and our three types of colour photoreceptors sample around the wavelengths for red, green and blue. 590 nm yellow activates both our green and our red receptors in a certain proportion. Any mixture of light that activates them in the same proportion will look the same as monochromatic, 590 nm yellow to us.

Interestingly, other animals may not agree at all, and some may be able to perceive the "RGB led yellow" as both red and green superimposed, without any yellow in it.

LEDs (pure color types without phosphor, which eliminates white, pink and some other odd colors) are almost monochromatic with some thermal broadening, so they emit light that is near the spectral locus of the CIE chromaticity diagram which you have reproduced above (the oblong shape with wavelengths listed for various points). The green color is not as close to the perimeter because of the curvature of the spectral locus in the vicinity of the center of the green LED wavelength distribution.

The gamut of reproducible colors of an RGB LED is a triangle joining the three LED colors, like this (the outer dashed triangle-- image from Fig 19.2 LIGHT-EMITTING DIODES, 2nd Edition, Cambridge Press): 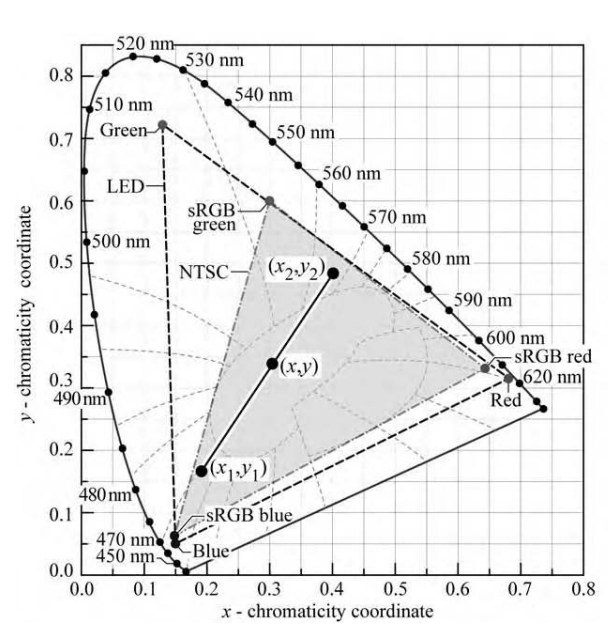 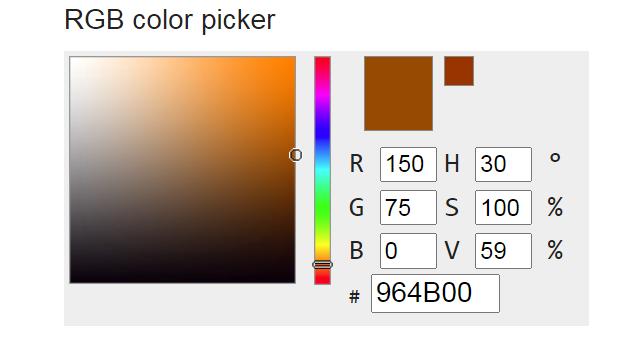 Human perceived color, converting between color spaces such as the two described above, and so on, is a fairly complex subject. There are good books and some good info on the web such as this site.

Brown is simply dark yellow or dark orange, and looks brown when juxtaposed with brighter colours.

I recommend this YouTube video. However, it just takes 21 minutes to say what my first paragraph says, with some illustrations and humour.

You're misinterpreting that graphic

That colour space is showing hues of equal saturation and brightness. Brown is merely one of those hues with lower brightness.

In colours, RGB is certainly how light emitters and receptors work. However it's a bad representation of how we perceive colours after the brain has done its image processing. HSV or HSL are far better "natural" representations - and as you'll see from the Wikipedia graphic, all the hues tend to fade through brown on their way to black (zero "value" or "lightness").

LED stage lights have been around for a while. The appeal is clear from a lighting point of view, because you can sweep between colours easily and instantly. And from an installation point of view, power consumption means you don't need kilowatts of power distribution, and you don't need lots of expensive faders (which are always electrically noisy and screw with your microphones). And it's better for performers, because those kilowatts mostly went into heating the stage up.

But after people had started using them, they found some obvious flaws. RGB LEDs aren't perfectly balanced, so it's hard to get a good clear white - and more than that, it's hard to accurately get a tinted white light. The tint is important, because a blue cast gives you the effect of moonlight, a yellow cast gives you sunlight, and orange gives you sunset. Following on from that too, it's also really hard to get good accurate shades of yellow from RGBs, and that's important because yellow is what gives us "warm" or "cold" light. Human eyes have high resolution to hues between red and green, so we can easily notice when something isn't quite right there.

So better stage lights aren't just RGB - they're RGBWA, with additional white and amber LEDs. That lets the lighting technician set the "lightness" in HSL space (between fully white and fully black) much more accurately with the white channel, and the amber channel gives much better control of the hue and saturation for anything between red and yellow.

LED TVs have picked up on this too. It's taken longer of course, because it's really technically difficult to make an LED TV screen, and just getting decent yields from RGB was hard enough to start with! So far I'm not aware of any which use full RGBWA, but RGBW screens are certainly available and advertise sharper whites and crisper colours.

You should consider the behaviour of the human eye when "different" subsections of waves come into the eye.

Think about magenta: what RGB LED emits is some amount of red and blue. But the brain mixes them and the final image in brain is magenta.

For your question, you are thinking about only one pixel. In the final image displayed on the TV, what you are seeing is not the colour of a tiny pixel. Instead, it's a mixture of the colours coming from adjacent pixels.

So, for brown, a single LED does not generate brown by mixing red and green with some amounts. Instead, adjacent pixels generate different colours to "approach" to brown so that your brain can mix them together for a "browner" image.

If this is the case, how does LED monitor display colors like brown?

It's interesting to note that this isn't how LED monitors work, but actually it kind of is.

"LED" monitors do not use RGB LEDs, they use white LEDs (which are themselves actually blue LEDs coated with a yellow phosphor) to backlight an LCD panel. However the LCD panel has red, green, and blue filters so all the answers about color mixing still apply.

OLED displays DO have individual RGB OLEDS for each pixel, as do microLED displays.

Not the answer you're looking for? Browse other questions tagged led color or ask your own question.

32
Why can't RGB or bicolour LEDs produce a decent yellow?