I want to open a solenoid electromagnetic lock using an IRFR024NPbF MOSFET.

Generally speaking, I do understand why flyback diodes are needed when controlling an inductive load with a relay or MOSFET. I also know how I should connect the flyback diode.

Let's take a look at the symbol in the datasheet: 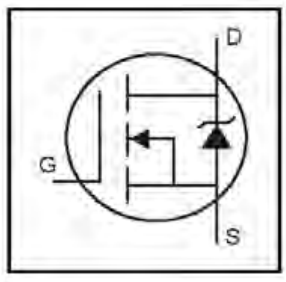 and assume that I want to use this as a low side switch. Now, if that diode would be a regular diode, then it would be of no use regarding the flyback effect. The current flows from drain to source during normal operation, and when I "open" the switch, the diode does not help, the MOSFET still dies.

But, on the symbol we can see, that it is not a regular diode, but a zener diode. A zener diode can conduct current in both directions without actually burning up. And I have read somewhere, that if it is a zener diode, it would help and protect the MOSFET. 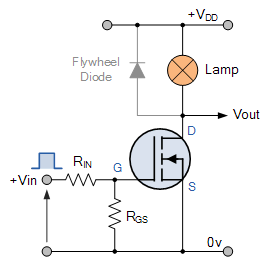 where the MOSFET has the zener body diode, there is no flywheel diode, and the lamp is actually some inductive load, would that work? (Vdd = 24V, In=0.16A)

(the specific MOSFET here is an overkill, but important is the concept rather than the actual application)

My questions are the following:

is the body diode a zener diode? Because in the datasheet it is not specified, only the symbol represents a zener diode

No. It is an intrinsic diode due to manufacturing process, so it's not a zener, you can find the forward voltage and current characteristic in any MOSFET datasheet.

I have also read that the diode is actually a byproduct during production. Do all MOSFETs have a body diode? If so, are all of them zener diodes?

Exactly, none of them are zener.

25
Correct use of Flyback or Snubber diode across Motor or Transistor?
2
Intrinsic Zener diode in MOSFET
3
Mosfet Snubber with Inductive Load
1
Body Diode of a MOSFET
4
Check for if I've picked the correct flyback and zener diodes for a solenoid valve driver
9
Use of Flyback Diodes
0
Identify the maximum voltage that can be applied across a Zener, MOSFET and transistor
2
FET protection when switching an inductive load with an inductive power supply
0
MC33887: Zener diode on output avalanche protection