How to shunt 1500 joules when voltage exceeds 75 VDC

I have an alternator that charges at ~58 V at 100 A. If its load (a lithium bank) cuts out suddenly (bms cutoff), I need a way to shunt power for 200 ms to a dummy load to prevent the current from falling to 0 A and voltage spiking to 230~280 V (after about 100 V it begins burning out the alternator diodes and destroying everything else connected in parallel, so it doesn't rise to infinity).

Ideally the voltage would be kept from going beyond 75 VDC. 200 ms is how long it takes the alternator field to dissipate after the regulator quickly cuts power to field, so that's how long I need to shunt energy away from the main circuit.

For 12 V and 24 V alternators, this is an $89 device made by a company called Sterling Power, but nothing exists for 48 V. I've been told the physics of 48 V make it much more difficult.

A manufacturer of a 48 V alternator regulator gave me the following data for a 200 V alternator "load dump" scenario. My alternator is 100 A max, so I only need that much protection:

"You will want to see about suppressing the voltage to below 100 V or so max, else will be out of the range of viable to most devices to survive. The detail here is a multi-joule 200 ms or so event, not just a HV/LC event – most devices already have protection for that in them. Suppressing a 200 A 48 V alternator for 200 ms at 100 V comes out to 3,000 joules, if I have done my math correctly. That is the goal here. 100 V suppressing, with a 3 kJ rating."

I found many voltage suppression devices for 48 V (Transtector was great about looking into their diverse 48 V suppression offerings) but their devices are for microseconds events, not 200 ms. So it's really getting into the area of sustained, albeit brief overvoltage, and not so much a transient.

Any ideas? I thought of maybe a 72 VDC converter with a 65 VDC minimum input (90 Vmax) but wasn't sure if it would be fast enough to begin shunting current to a dummy load attached to its output.

There must be a way to build a large inductor or an RC network that could absorb that kind of energy after the voltage crosses a set threshold.

It seems perfectly feasible to dump the load into a 1 kW wirewound resistor using a mosfet.

This is a 1 kW wirewound resistor rated for 10x overload for 5 seconds. This will have no problem handling 100 Amps for 200 ms as long as you don't do it over and over. Cost is around 80 US dollars in single unit quantity.

This is a 100 V MOSFET with 2 mOhm Rds(on). Ignoring switching losses, the dissipation will only be 20 Watts (assuming Id = 100 amps) for 200 ms. That should be no problem. Cost is under 10 US dollars in single unit quantity.

Those are the key components. You will also need a comparator, maybe a gate driver for the MOSFET, and a voltage reference. And, I guess, probably a 10 or 12 V regulator of some type for the gate driver and reference and comparator. You will want to make sure the MOSFET latches on and stays on long enough to dump all the energy. So the 12 V rail for the comparator might need a diode and capacitor to hold it up at least until after the field collapses.

With this power level, you will need to do some failure mode analysis (regardless of what solution you choose). What if the load dump mechanism fails in the "on" position? Do you want to detect that fault and suppress operation of the alternator? Blow a fuse and just have no load dump? Etc. That is your responsibility because you know your system. I don't.

While it's certainly possible to design a shunt load to absorb that much energy, it would require a somewhat large and expensive pulse-rated resistor and a nontrivial semiconductor to switch it in.

Instead I would take the approach of accelerating the regulator's woefully slow load-dump response: Use an op-amp or comparator to detect an overvoltage condition (above 70 V, say), and respond by short-circuiting the alternator's field winding. This only needs a modest FET, BJT or SCR since the field current will only be single-digit amps. You'll want to add a circuit breaker or PTC resetable fuse on the upstream field supply unless it's already current-limited. Depending on the dynamics you may need to make the field short-circuit latch for a few hundred ms even after the overvoltage trigger condition has gone away, or use hysteresis.

This is known as a "crowbar" overvoltage protection scheme and is common in aircraft power systems to protect expensive avionics from alternator regulator failures. Slightly different application here but it should work just as well.

Option: you may short all the alternator windings upstream to the rectifier to the minus rail, it may be simpler in regard to transistor selection.

I would think a thyristor/SCR crowbar circuit on a heatsink could survive for 200ms.

Except instead of crowbarring a short, crowbar into a resistance. If you're really worried you can use water submerged resistors (like hot water tank heating elements). We use something like this at my work for a continuous 4kW loads. Our setup is 4kW and is two 10 gallon buckets and four 1500W hot water heating elements. Since yours is a pulse you could probably just stuff all the heating elements into a single bucket. I don't even think you need the water to be honest but it's a safety net during testing. Also works as a dummy test load. You could make one bucket that draws the same current as your battery when charging and then crowbar into the other bucket.

This is a traditional crowbar circuit except a dump resistance has been added. They often don't have this and are just a short. It clamps the circuit to near zero which causes an overcurrent which blows the fuse.

The dump resistance is in case the thyristor can't survive the surge by dissipating the power within itself. Unlike MOVs and TVSs which must do so and are far more stressed.

You may not need a dump resistance at all if the thyristor can handle the surge until the fuse blows and crowbars often do not use one. Clamp voltage will be far lower that way.

Even if the thyristor can't handle it, as long as it is big enough so it does not fail by exploding and leaving an open-circuit, it will fail short which is what you want anyways.

So you basically want the voltage to stay at 58V or lower when the crowbar latches. A couple of volts will be dropped across the thyristor which leaves 56V at 100A. Which means you need 0.56 Ohms or lower.

For example, the large thyristors such as the VS-T90RIA10 come in packages that accept screw terminal wiring and bolt directly to the heatsink. They cost between $50-$200 depending on the part. The part mentioned here costs about $50.

And in the datasheet it states it can handle a non-repetitive half-sine wave surge of more than 600A for 200ms. 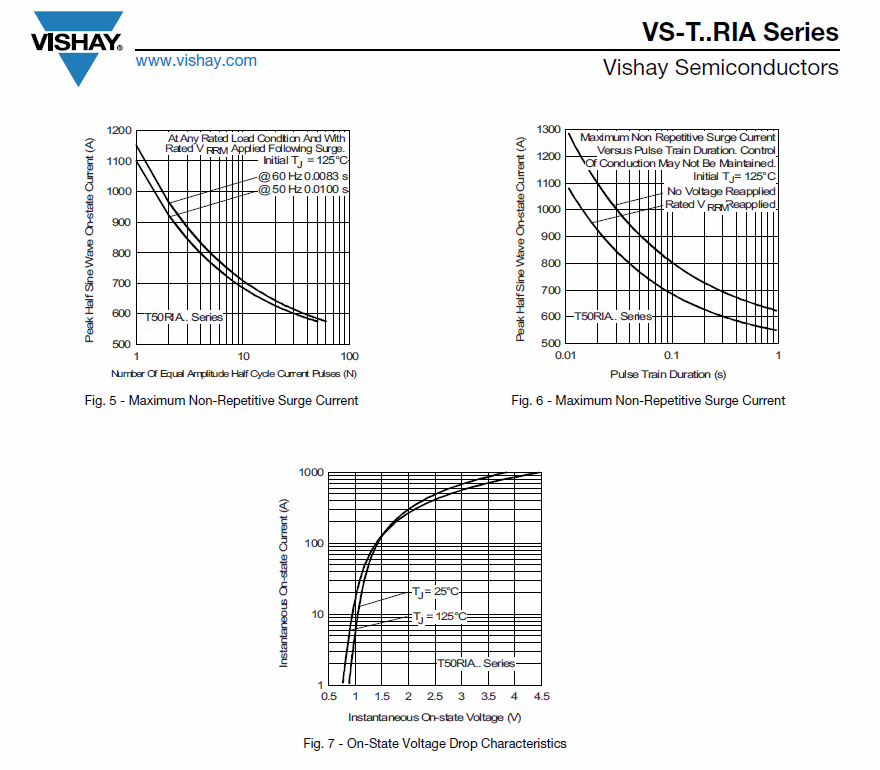 I don't think it should cost more than $200USD: thyristor, some hot water elements, some buckets, and an aluminum block to act as a heatsink for the thyristor. No point in an actual heatsink with fins since the pulse doesn't last long enough for air cooling. You just need thermal capacity so the heat from the thyristor has somewhere to go other than the thyristor.

Not the answer you're looking for? Browse other questions tagged power voltage-regulator power-electronics energy transient-suppression or ask your own question.

3
How to improve load transient response of an LM317 voltage-regulator powering an audio amplifier?
0
How does a DC generator vary power output to suit load
0
Driving an RL circuit with an audio power amplifier
1
Capacitor charging and energy
6
270a DC inrush, 130a DC nominal load. 14 vdc supply. Ways to limit circuit to no more than 11.5 vdc?
0
How can the charge time/startup time for a boost generator be calculated?
3
Getting the energy consumption in joules over a period when having current and voltage