Why are base current and emitter current the input current in common emitter and common base configurations respectively?

I am a high school student learning about semiconductors (diodes and transistors). I have been facing a lot of problems to understand the configurations of BJTs and the simplest amplifier circuit. These confusions have risen perhaps due to unclear explanations in my textbook for which I have assumed some of the explanations. Now it seems that the assumed explanations are mostly incorrect.

In the examples you quote, "Input" and "Output" and based on designer intent.

The "input" is the side you hold, the "output" is the side that's on the bolt, but that's not a property of the wrench, it's decided by the way you use it: if you flip the wrench around, the labels will switch sides too.

Now look at this emitter follower:

Now, if the emitter resistor R4 was not constant but instead variable, and the base voltage was constant, and the intent was to have the transistor set a constant voltage across this resistor to measure its value by measuring current flowing through it, said current being sent into the collector resistor... then it would be called "common base", but the circuit didn't change much.

#3 If you put an AC current source on the emitter to measure its output impedance, then the output also becomes an input.

#4 If you put an AC voltage source on the collector to measure the Early effect, or the supply rejection ratio, of your emitter follower, then the collector is also an input.

#5, the differential/LTP. What we're interested in is collector currents, so we decide it's the output. We input some signals on the bases, so they get an "input" label. The transistors themselves don't care, and besides, the question of what the emitter is in this case is quite interesting: it is an output because each transistor works as a follower, but it is also an input because each transistor influences the other's current through its emitter. So it combines common collector and common base.

So, basically, all three pins are both input and output, and it's more about impedances, gain, and intent:

Collector: For BTJs in forward active mode (or FETs), Ic depends very strongly on Vbe, but not much on Vce. This means the collector is useless as an input: if you put some signal there the transistor will try its best to ignore it. Low dependence of Ic on Vce means the collector behaves as a high impedance current output. It is only considered an input if you're interested in the effects of some of the transistor imperfections like Cbc, Early effect, etc, on your circuit.

Base has high-ish impedance and low current capability, so it's not generally usable usable as an output. It is however very convenient as an input, so that's what it is used for. Its impedance depends on the circuit.

In common collector (follower) mode, emitter voltage follows base voltage, so the base's input impedance is quite high (ie, hFe * emitter load). Then it behaves as a high impedance voltage input that draws a bit of parasitic current that's annoying but you got to live with it.

In common emitter mode, since Vbe is quite constant, base voltage stays pegged to emitter voltage. So input impedance is low: you can feed current into the base and it won't move much. So it behaves as a low impedance current input.

The emitter is the most versatile since it's low impedance IO.

Why is emitter current the input current in common base configuration but not collector current?

Because you use common base when you want to do that, it's simple as that.

Common base is a current conveyor. Say the previous stage outputs a current, but wants to output that current into a constant voltage (or known voltage) node. A common use case is to use a resistor to turn voltage into current: you use the emitter of a transistor to define the voltage on one side of that resistor.

Another use case is the cascode: 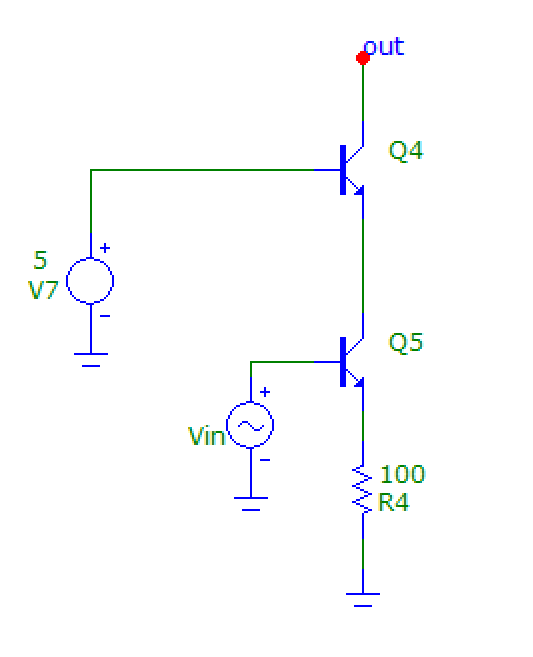 Here Q5 acts as a current source controlled by Vin, it will output AC current on its collector equal to Vin/R4. If its collector is directly connecte to a load that has large voltage swings, then perhaps its Early effect or collector to base capacitance will cause problems. So, cascode Q4 takes Q5's collector current as input on its emitter, and just outputs it on its collector. All it does is keep Q5 at a constant Vce, which solves problems caused by Early effect and Cbc.

Why is IB considered to be the input current in common emitter/collector configuration?

These are all routine questions frequently asked but perhaps hard to search. Don't doubt your textbook until you fully understand.

The transistor has many non-linear characteristics that with certain configurations can be linearised, somewhat with R ratios or kept nonlinear and used as a switch. As a switch, the current gain reduces up to 90% or 10:1 to 50:1 at best unlike a relay, which can switch with a current gain of >>5000 taken to the limits. e.g. 25A relay with 5 mA coil.

CB details CB Simulation At the risk of too much info, here is a CB amp with a 50 Ohm gen. Note that Vbe still modulates Ic but Vb is constant and Vbe is relative small change. So effectively we say it is linearized with Av=Rc / (Rbe+ Re) but Rbe is controlled by Ic is the small nonlinear dynamic resistance. Thus gain here resulted at 85% of Rc/Re by choosing Ic >1mA Vc near Vcc/2 and Rth base Thevenin Req/Re about 75% of hFE. Your mileage will vary with these choices. 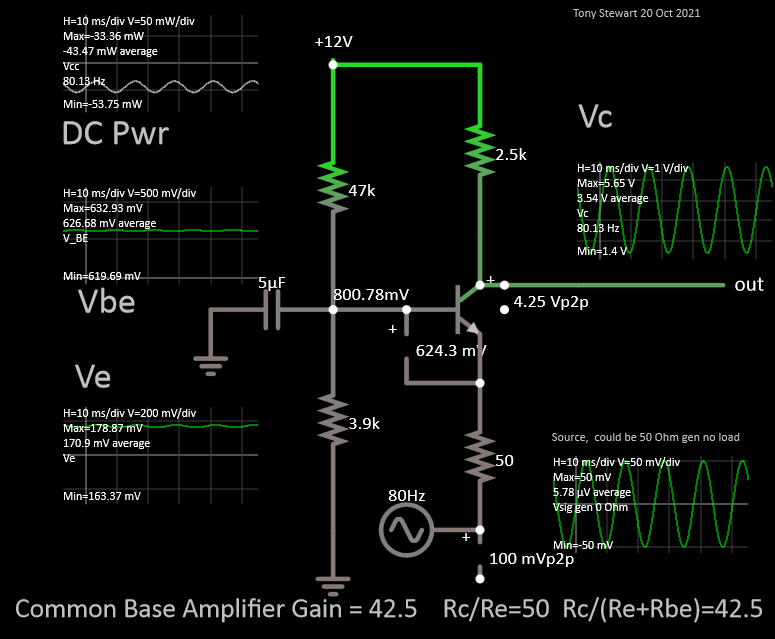 Some search results may be helpful.

Notice that by swapping ground on CB input Cap. with Re signal gen. I can go back to a CE amplifier. again with a voltage gain of 42. (4.22Vpp/ 100mVpp) 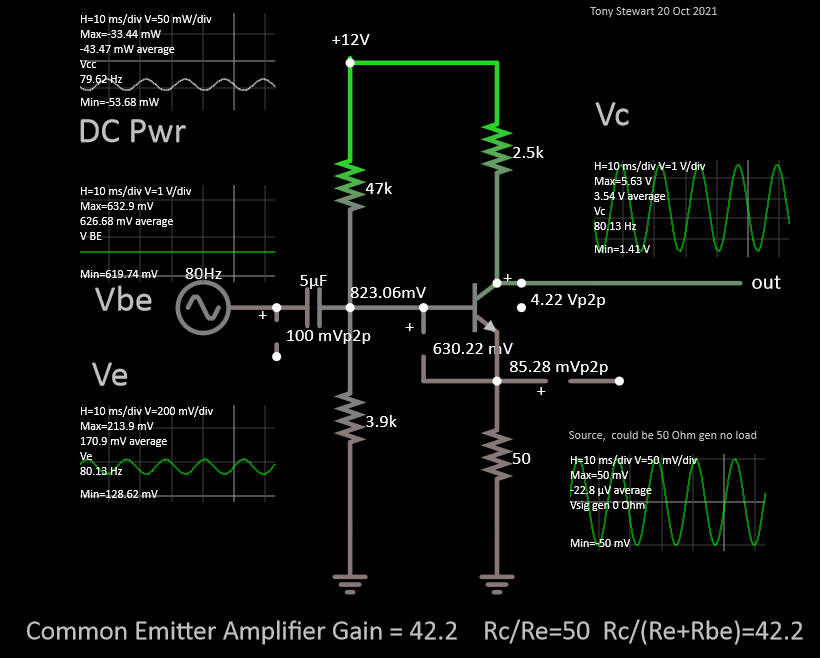 Keep up the great questions. This is the root cause of every great engineer.

MSKB - the answer to your question is relatively simple and can be rather short:

The transistor is a 3-terminal device (C,B,E). When properly connected to supply voltages the current between C and E can be varied with a control voltage Vbe between the base and the emitter. The control function is an exponential function as given by W. Shockley Ic=f(Vbe).

The main theme pervading your questions is "why consider something an input or an output in a transistor circuit?". The principal answer is "the output is the one where current and/or voltage appear amplified in relation to the input, because otherwise why bother with a transistor?".

Now of course transistors are not linear devices, so there may be a number of other reasons for using them that cannot easily be classed as input/output (for example, a transdiode, namely just tying together basis and collector of the transistor, obviously has no separate input/output, and circuits like a constant current source stretch the input/output definition). But for the standard amplifier configurations, one can with some justification determine a pin working as input and an output pin that carries in some form an amplified version of the input.

Not the answer you're looking for? Browse other questions tagged bjt common-emitter common-base or ask your own question.

8
Confusion regarding signal amplifier
0
Why is the voltage drop across the collector emitter junction of common emitter configuration the output voltage instead of that of load resistance?

1
Input impedance is higher in Common-Emitter than Common-Base?
0
Why are the considered signal and current input of common base and emitter different although both take \$V_{EB}\$ as input?
3
Why is the common emitter input insensitive to base width modulation?
3
Why is Ib proporional to Ic in a bipolar transistor?
0
Transistors - The change in the base current
0
Why are both bias resistors considered parallel in a common emitter amplifier?
2
When base is open, is the base-emitter junction reverse biased? How does leakage current from collector to emitter flow?
0
Why does a Common Base amplifier gives non inverting output?
0
Difference between CE, CB and CC transistor configurations
0
Why is the voltage drop across the collector emitter junction of common emitter configuration the output voltage instead of that of load resistance?