Time constant of this circuit

Can someone tell me on why the time constant of the below circuit is not R2*C? 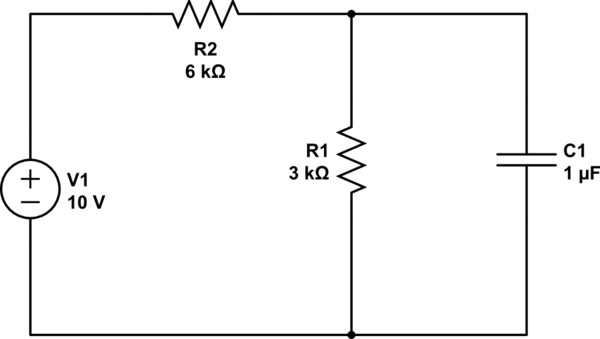 My understanding is that, the Capacitor C1 is getting charged only through R2 and I feel that R1 isn't playing any role. I tried to find answer in this site and got this link. But I am not sure on the logic why we should calculate the time constant with the parallel combination of the resistors.

How to go about finding the Time constant of this circuit intuitively?

I tried to reduce the resistor network, but not sure on how to proceed.

What follows is completely lacking in rigour, but you asked for intuitive, and here it is. I'm going to make these observations:

That value of "one third" is key. It comes from the term \$\frac{R_1}{R_1+R_2}\$. I cannot think of an intuitive way of relating this to the combined parallel resistance R1 ∥ R2, except to point out:

I confess I can't see how this helps, but at least you can see how the time constant is related to this parallel combination.

We can replace the entire network consisting of V1, R1 and R2 with its Thevenin equivalent circuit:

These two circuits are functionally identical. If you enclosed them in a box, with only nodes A and B exposed, there's no way from the outside of distinguishing one from the other, because they behave identically. Any conditions you impose at nodes A and B of either box will yield exactly the same results.

So, if you connected a capacitor C1 between A and B, it would charge in the same way in both cases. Yet, in the second Thevenin equivalent circuit, clearly the time constant will be:

Basically you need to determine the thevenin equivalent resistance which feeds the capacitor.

It would just be more obvious if for example they were both 6k resistors and both would charge to separate 10V supplies.

Time constants in linear circuits, in the case of a single reactive component C or L, are by definition calculated in this way:

A "no brainer" solution method would be to use some mathematical software like Maple to help you solve node equations and inverse-LaPlace transform. Call the voltage at the top of \$C_1 \$ for \$V_C \$. The node equation is

Short out the capacitor. The current through the cap is obviously 1.667mA. That's what happens when the power is first applied (assuming an initial condition of 0V across the cap).

That resistance times the capacitance will give you the time constant.

My understanding is that, the Capacitor C1 is getting charged only through R2 and I feel that R1 isn't playing any role

Let's say that is true: so when the capacitor \$C_1\$ gets charged, there will be a voltage across it and since \$R_1\$ is in parallel there will be voltage across it too; and consequently a part of the current will be increasingly flowing through \$R_1\$. The only case when \$R_1\$ would not matter is if it were \$\infty\$ or an open circuit or in other words not there at all. Only then will your assertion be valid.

For ac analysis, the voltage across \$C_1\$ would be given by the following ratio,

and putting in the standard pole-zero form:

0
Why is the voltage of a capacitor equal to the voltage of a battery connected it?
0
Identifying Parallel Resistors from Series
0
Different time constants for charging and discharging of modified RC circuit