I'm trying to design an op-amp circuit to sum up four voltages by using a non-inverting summing configuration. You can see it in the circuit below, though for illustration's sake, the resistor values are just 100-ohms. I'm having some issues with deciding what values to use. 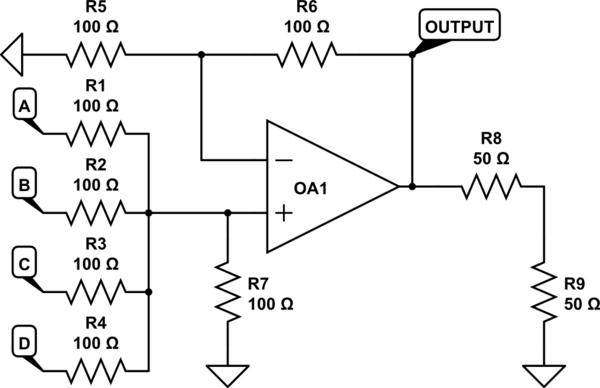 Assuming all resistors are equal, the resistors cancel each other out, and that simplifies to \$V_P =\frac{V_A+V_B+V_C+V_D}{5}\$

The inverting terminal \$V_N\$ follows the basic formula for a non-inverting sum, with the gain being determined by R6, the feedback resistor, and R5:

Altogether, the output voltage can be written as a sum of the input voltages. Depending on your pick for R5 and R6, unity gain seems to be achievable.

With all this, you can determine the net gain from the resistor values, but how should I begin in determining what values are appropriate to use for the op-amp? In this topology, how do multiple inputs affect the bandwidth, and how do you pick resistor values that maximize bandwidth? Would bandwidth still be affected by the net gain as shown in the last equation, or is it only dependent on the gain term from R5 and R6? I've tried following this guide that helps design summing circuits, but the methodology used seems to indicate that R7 should not be included, so I'm unsure.

Assuming the voltages are all to have equal weights, you have R1 = R2 = R3 = R4. There's no need for R7 unless you need to reduce the voltage at the non-inverting input, so leave it out for now.

When all the voltages are equal to (say) 1V, the voltage at the non-inverting input will be 1V. To make it a summing amplifier you need a voltage of 4V, so the ratio of R6/R5 must be 3. If you include R7 you'd just have to increase the gain, which would reduce the bandwidth and increase the noise and DC errors, so leave it right out.

Now you have two sets of ratios but there are still two degrees of freedom. You can pick some reasonable and easily available in precision resistor value like 10K for R1..R4. Now the impedance seen by the non-inverting input is 2.5K. You can pick R5||R6 = 2.5K (and R6/R5 = 3) to equalize the impedances seen, or for some op-amps that's not particularly important because bias current is so low and you might pick R1..R4 much higher to minimize loading, for example.

For a given op-amp bandwidth (and maybe phase margin) will be improved by reducing resistor values. Too low and power is wasted or the op-amp may not be able to drive the low resistance or the input loading is too much on whatever is driving it. So, it's a trade-off. If you're dealing with MHz the resistor values will typically be much lower than if you're dealing with DC-audio.

The disadvantage of the non-inverting summer is the possibility of crosstalk between inputs : for example if signal A was fed from 10 ohms source impedance, (R1 / 10) and signal A was used elsewhere, the voltage at the summing point would be added to A, attenuated by only about 20dB, and clearly audible to anything listening to (or recording) channel A alone.

If this matters to you, then you can keep R7 low (e.g. R1/10, attenuating the summed voltage by another 20dB) and live with a low amplitude at the summing point, making up for it with increased gain (R6/R5 + 1). This has the disadvantage of poorer noise performance, as a tradeoff for somewhat improved crosstalk between inputs.

However, the major advantage of the inverting summer is the virtual earth, which avoids the crosstalk issue altogether (though careful layout is still necessary to keep crosstalk below -80dB)

So the best choice depends on situational information that only you have.

Not the answer you're looking for? Browse other questions tagged operational-amplifier bandwidth non-inverting summing gain-bandwidth-product or ask your own question.

3
Solving an Op-amp circuit
2
Op amp non inverting summing amplifier
3
Input impedance of a non-inverting op-amp
0
Summing Amp Response in a Cascaded Butterworth Notch Filter
2
MOSFET voltage follower for non-inverting op-amp biasing
0
Non-inverting-Amp bias current: understanding output error
0
resistance range to voltage range with single op-amp
3
Why is CMRR effect multiplied by gain in this non inverting op amp configuration?
1
Is this Non-Inverting integrator correct?
1
Is there a limit to the number of inputs that can be summed with an op-amp summing circuit?