I am trying to understand the noise induced in wires running adjacent to a mains power line. For that purpose, I took about 4 meters of extension cord and 4 meters of RG6 coax and tied them next to each other with cable ties. I plugged in the extension cord, but without a load, so I expect predominantly capacitative coupling. I connected the ground of my oscilloscope probe to the wall outlet ground, and probed the center conductor of the coax. The shield of the coax is not connected to anything.

I expected to see a sine wave, together with some harmonics. What I did not expect was how "dirty" the signal was. 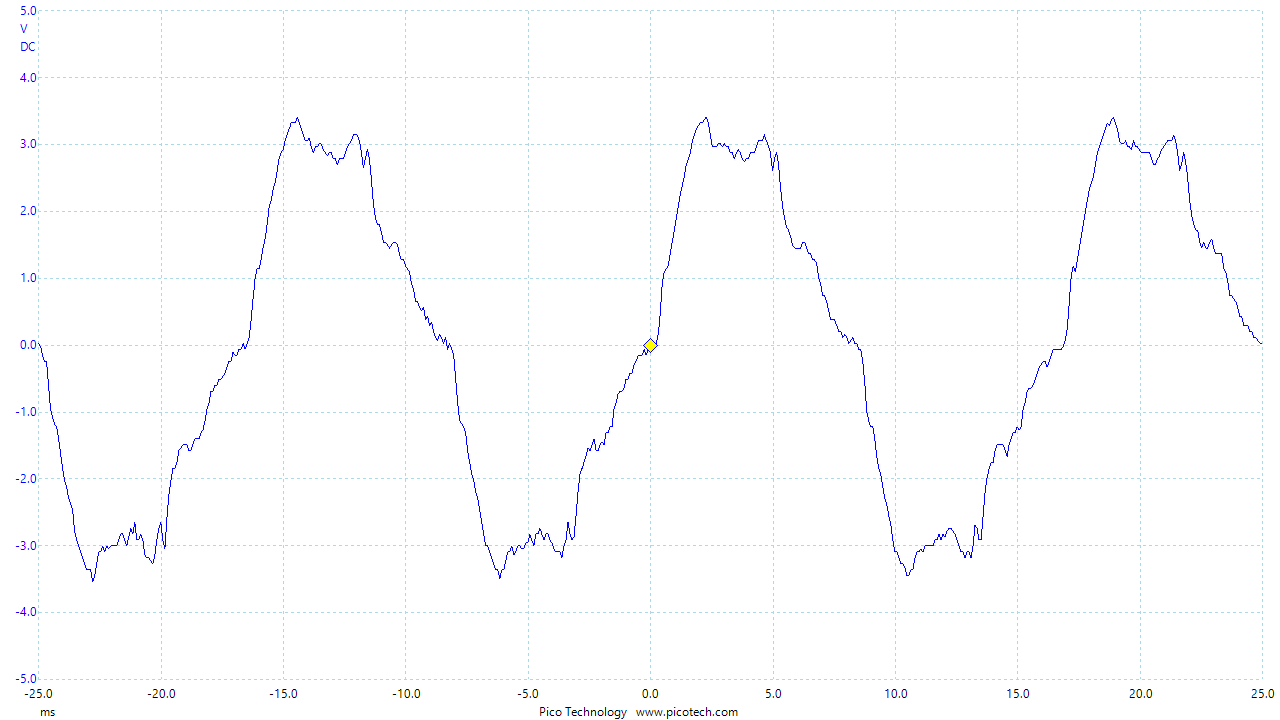 The frequency analysis has me a bit stumped. 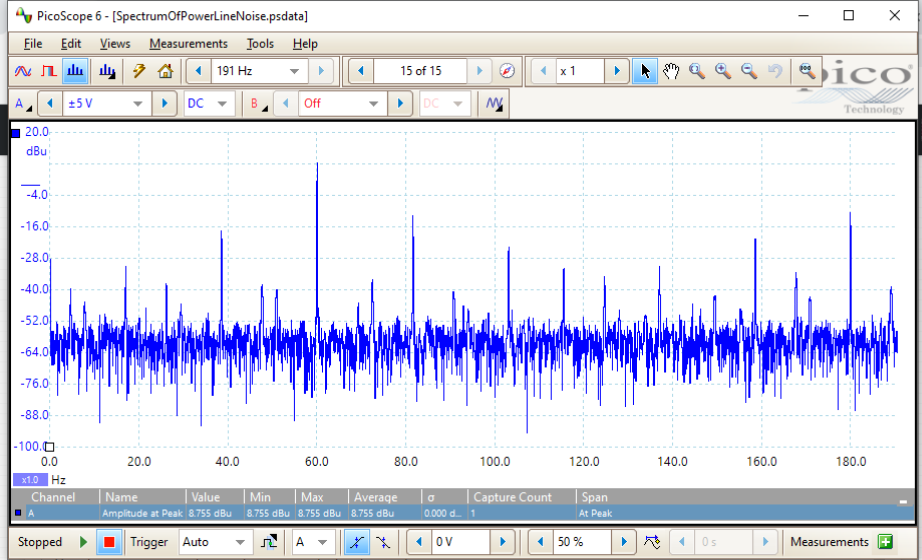 I live in a building with 200 units, but I can't imagine what is causing signals at such odd frequencies. Perhaps slip frequencies for induction motors? The frequencies seem to low for noise from switching power supplies, but I'm willing to be convinced. This will perhaps be forever a mystery, but if anyone has ideas for what could be causing these odd-frequency signals, I would love to find a reasonable suspect for their cause.

It was suggested that the dirty waveform is to be expected when probing a floating object. However, it seems that in this case the waveform comes from the capacitative coupling between the coax and the power extension cord. If I unplug the extension cord, the waveform is quite flat, even though it is "floating". 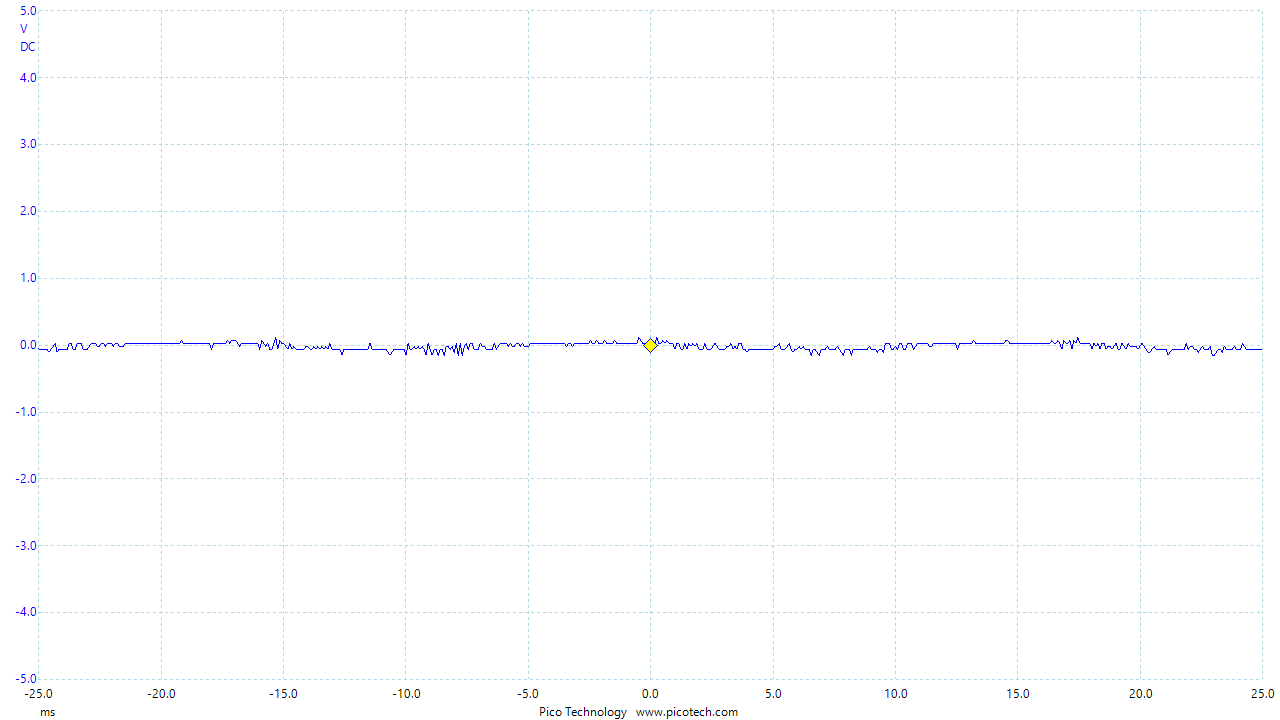 So, it appear that it is not "floating" that causes the signal, but capacitative coupling to the high voltage in the power lines.

That being said, it is still a question why such capacitative coupling should give such a dirty signal if the mains voltage is cleaner. (Will make a voltage divider and look at the mains voltage tomorrow, but I expect it to be cleaner.)

It was also suggested that the odd-frequency peaks in the spectrum were the result of aliasing in my scope. Sadly, I think this is the case. As suggested in an answer below, I turned the "max frequency" control up to 3 kHz, and zoomed in. The oddball frequencies are noticably absent. 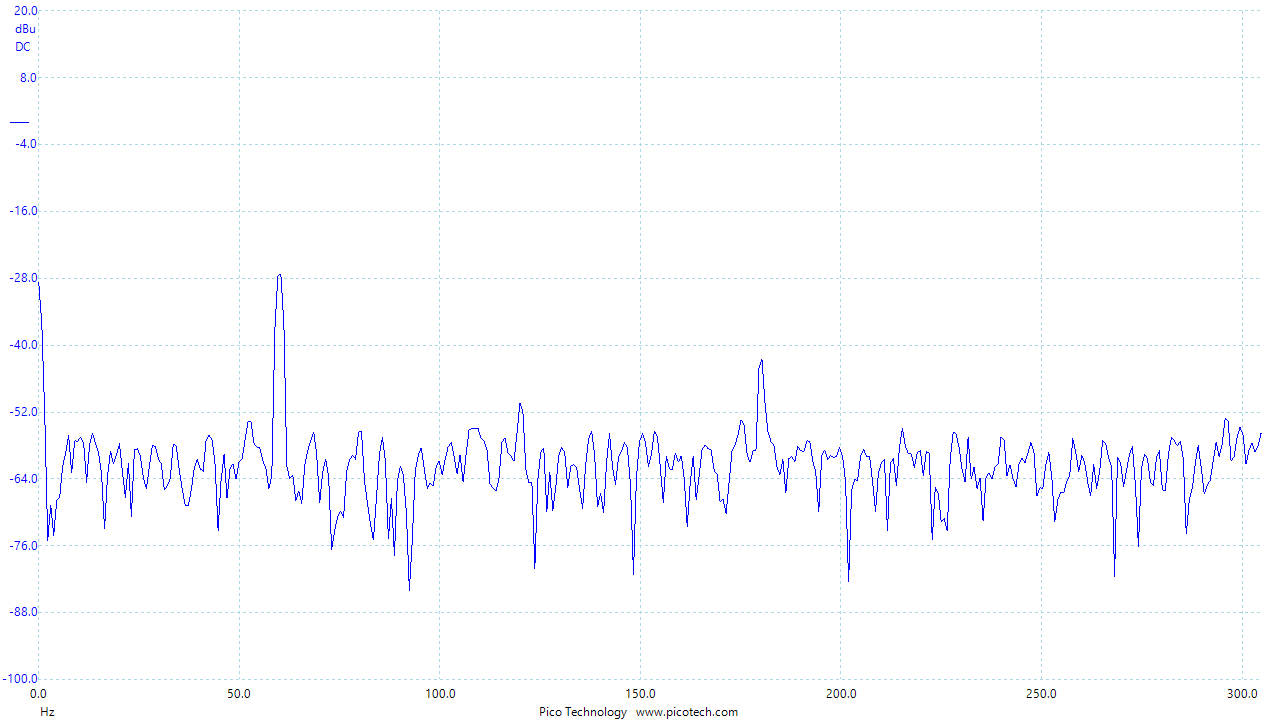 I would have imagined that the scope would significantly oversample and then decimate/low pass filter the signal when performing low frequency spectrum analysis, (essentially, what I just did manually) to avoid such aliasing problems. But, I imagined wrongly. One side effect of this operation, however, seems to be that the peaks are much lower in amplitude and much closer to the noise floor. I imagine that this is due to the higher bandwidth making the relative amplitude of the 60 Hz signal smaller.

I just repeated the experiment with hookup wire instead of coax, with basically identical results. It occurs to me that the reason for the dirty appearance of the signal may be due to the fact that the capacitative coupling forms a high pass filter with a cutoff far above what I am measuring. Thus, the ratio between the 60 Hz signal and say a signal at 1260 Hz gets significantly shifted. What may appear as a very small distortion in the mains voltage, ends up appearing as jagged noise in the signal picked up by my wire.

TL;DR Try increasing the sample rate to, say 3kHz or so and see how that changes your spectrum.

There is little second (or even) harmonics of the mains signal (120Hz) as the waveform is symmetric in positive and negative sides. Odd harmonics such as 180Hz (the third) make sense for a distorted waveform.

Those numbers are close but don't quite seem to line up. So the question is why are there seeming multiple of 22Hz spacing appearing

From the image, it seems your max frequency is set to 191Hz - so persumably that means it has a sample rate of 382Hz. That would be 22Hz off one of your harmonics (360Hz)!

The peaks in the spectrum appear therefore to be the high order odd harmonics in the waveform being aliased by the 382Hz sample rate.

Analytically, this would give odd harmonics appearing at the following frequencies due to aliasing:

In fact, if I do the FFT of the time domain data from the first image you provided (data extracted from graph using WebPlotDigitizer), I get the following. Lots of odd order harmonics as expected:

Not the answer you're looking for? Browse other questions tagged noise mains noise-spectral-density or ask your own question.

9
Power Supply Noise
2
Open loop op-amp white noise difference amplifier
5
Power line voltage out of phase with ambient 60Hz electrical noise - why?
18
Why doesn't aliasing of broad band noise 'pile up' in the sample band?
0
Quantifying white noise with a spectrum analyzer
0
Mains frequency noise components
0
What can be said about the nature of the noise by looking at this spectrum?
2
What noise frequencies is an oversampling ADC susceptible to?
0
Why the power line interference harmonics appear gaussian?